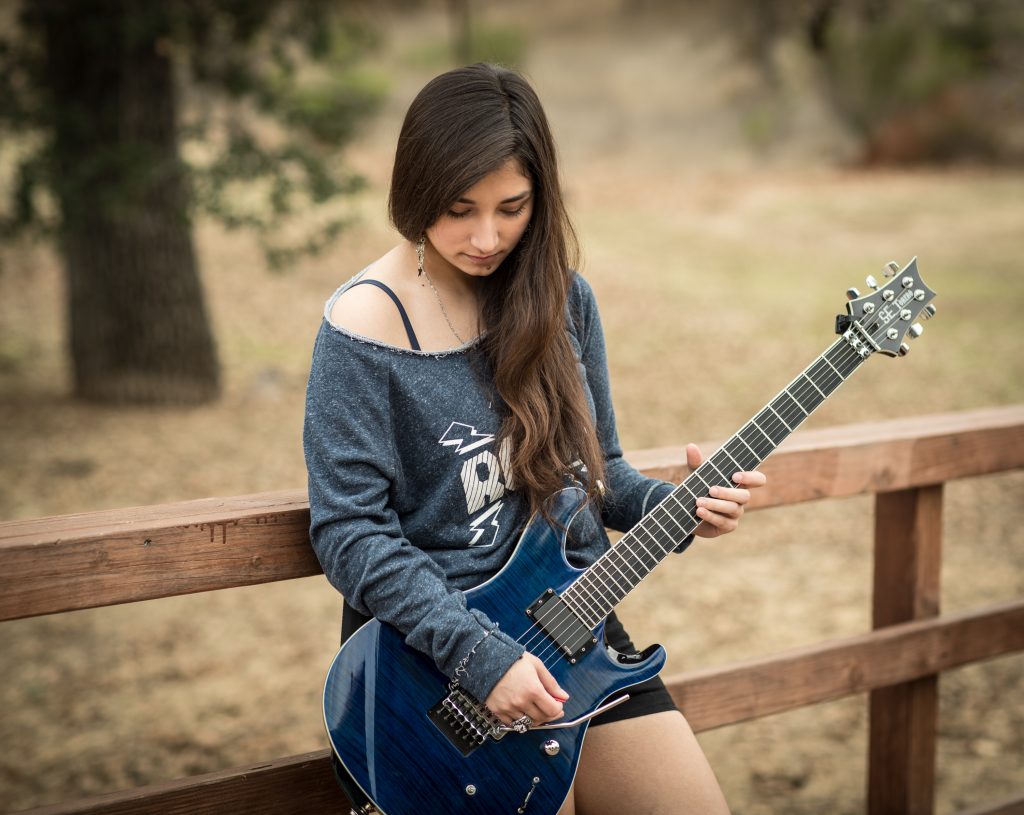 Female guitarists don’t often get the spotlight, especially those who play heavier genres. This isn’t the case for Jimena Fosado, a Mexico City-born artist now taking Los Angeles and the world by storm with her own unique sound and skillful guitar playing.

Fosado has an impressive background. She’s been granted the Synyster Gates Scholarship (Avenged Sevenfold) at the distinguished Musicians Institute, completed two national tours in the US, and has shared the stage with Steve Vai, Paul Reed Smith, and Scott Page.

Although she has reached high levels of success, it did not come easy for Fosado as she faced several hardships, including a serious injury that had a long recovery process. Fosado talks with us today about her move to the United States, her experience at the Musician’s Institute, and how she overcame her injuries and discrimination in the industry.

The WiMN: Tell us about your upbringing in Mexico. What was it like to move to the U.S.?

JF: It was really exciting and scary. I knew what I wanted to do and where I wanted to go for my career and goals since I was younger; However, it hasn’t been easy and I was aware of it. New country, new culture and no family around. I knew nobody when I got here. Looking back now, I can’t believe everything that has happened and what I’ve done and much more, all the people I’ve met!

I remember being so excited to graduate from high school and move here. My family was shocked I was being reckless and I didn’t understand why it was such a big deal for everyone. To me, it seemed so easy: know my passion, graduate, move out, discover, live and rock on. Ha ha. It was just like that, until the day I was already on the plane. The life bomb sinks in before taking off. I was with my dad and I told him “Dad, I’m so scared. What’s going to happen?” He told me “Whatever needs to happen. Trust your instincts. This is a huge decision and you’re fighting for your dreams. You’re being brave. A lot of people would’ve never taken this plane. Now that you’re here, there is no turning back. Prepare and enjoy the ride.” That moment is priceless and means a lot to me because it is so powerful and true. I didn’t know what was waiting for me, and I’m still figuring out to this day.

The WiMN: What was your experience like attending Musicians Institute?

JF: It was amazing! I loved it and enjoyed it to the fullest. I met people with the same passion I have. For a long time, I felt my friends couldn’t understand me and my love for music before I came to the U.S. M.I. was the world I was waiting for. I learned so much from great teachers and students, life lessons as well as career lessons. I got to meet some of my best friends there. I feel lucky and grateful. I do believe it’s all up to the student no matter where you go. Take advantage of what you have in front of you.

The WiMN: You’ve shared stages with some pretty high profile guitarists and musicians. Can you tell us about one stand out moment?

JF: The day I played with Steve Vai, I thought it was a dream. It was also the most nervous day of my entire life! I had one of my inspirations and role models in front of me, listening to what I was playing. I was nervous and didn’t want to mess up but had to keep in mind to give the best as I could no matter what. I started getting into the zone and ended up amazingly well. We jammed and he would notice different scales I was playing and he played along to what he was listening to. It was like a dialogue between us only using guitars, it was so much fun. Moments like that make everything I fight for really worth it. Trust me, being in this industry is hard. Much more being a young female playing an instrument dominated by males. The path can get rough sometimes, but moments of gratification like playing with Steve, overcoming your fears and stepping out of the box make me keep going. This was once a dream and it became a reality, I don’t see why I shouldn’t keep going to see what else is possible.

The WiMN: You were seriously injured while attending a concert, resulting in three months of bed rest where you were unable to practice guitar. Can you tell us about this experience and what you learned from it?

JF: I broke 7 ribs and they separated from my chest bone just for being almost in front of the stage. Lesson learned, “never be close to the stage.” I learned how to be patient waiting on the recovery. I was freaking out not doing what I loved the most and what was my stress reliever (playing guitar for hours). I got to write a bunch of lyrics and put my energy on something else that is still music related. Actually, I improved a lot my composition side and songwriting because of that. This left me with a permanent condition on my ribs but I won’t let this stop me from rocking out. I know accidents can happen in a concert. As an artist, I’ll always be concerned about the crowds I play for. I don’t want my audience to have the same issue I had. In the future, I’ll do my best to avoid this happening at least during my shows.

The WiMN: Have you ever felt discriminated against because of your gender? If so, how did you handle the situation?

JF:  Definitely. 100%. Yes. Unfortunately. Well, since I started playing guitar and went to the music stores to try different guitars I experienced that. They’d look at me and underestimate me. They didn’t have to say much, just their look towards me and not letting me plug in an amp bigger than 10 watts. It just took me a bit to start playing few things when they’d look at me and my dad. After a while, they’d approach my dad and start talking to him and me, then letting me try anything in the store and tried to be so friendly. People would create a circle or record me playing. It happened SOOO MANY TIMES. I got used to it, I first hated it though. Made me realize stereotypes are so marked in society. 95% of the people I talked to didn’t think girls could like metal and heavy music nor shred. I don’t like that concept and I want to change it. I am decided to change it.

Also hearing that as a girl in the entertainment industry you need to “do anything” to get where you want has made me rage. I am so against that and it won’t change me. I want to change that misconception. Nobody has to hear that nor go through that. The fact of being a girl or an already successful girl in the industry doesn’t mean you’d do anything to get where you want. There are hard working people out there with morals and respect is needed. Nobody said it’d be easy but I want to at least be part of the change that matters. Let’s be real, some people would not dare to even talk about it. Too bad because I certainly will. I’m proud of being a girl in the industry.

The WiMN: Do you have any advice for young female guitarists, particularly those from countries where finding resources to learn and progress might be a challenge?

JF: Don’t give up. Follow your passion and do what you want. Don’t listen to people telling you that you can’t do something just because you’re a girl. You can do anything. Don’t underestimate yourself. Learn from everyone, research and stay motivated. Don’t feel overwhelmed if you can’t or are not sure about going to a music college to get information and resources. Nowadays learning could be online, with friends, books, apps, videos, it all depends on you. Talk to people, go out and meet people. Much more, enjoy whatever you do.

The WiMN: What’s next for you?

JF: I’m currently recording my album that will have featured artists. I’ll be releasing at least 3 new singles in the next quarter or so. Experimenting with genres and writing material. Actually, I want to have songs with lyrics as well, so I’m trying figure that out to get a better market and give the message I want to people. Going to jams, getting out there and have as much experience as I can. I am playing guitar for some artists and bands as well as teaching. I want to go big so it takes a lot of work plans, determination and time. I’m open to any experience. All I know is that I am here for a reason and I want to enjoy what I do it to the fullest.