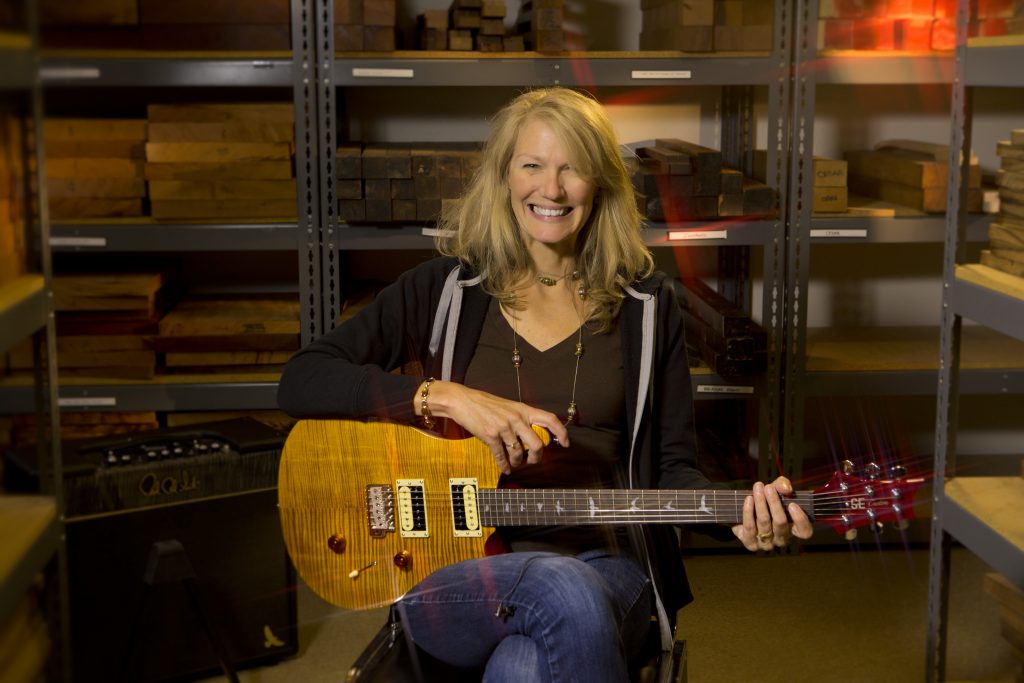 For over six years, Jeanne Stap Nooney has handled public relations, sponsorships, partnerships and charitable donations for legendary guitar and amplifier manufacturer, PRS Guitars. In addition, she coordinates the company’s numerous major events, which include NAMM, festivals around the country, dealer events and more. Most recently Nooney traveled to Germany for the second annual GuitCon, where she represented PRS among guitar influencers, YouTubers and other industry professionals.

Below, we catch up with Nooney to learn more about her career and background in music.

To find out more about PRS Guitars, head over prsguitars.com.

WiMN: What inspired you to get into PR work specifically with guitars?

JN: I started playing guitar, piano, and flute early on and was always drawn to learning more about the people playing the instruments and the companies that made their “tools.” As a teen, I would gobble up the stories published in Guitar Player while drooling over the gear ads. This fun addiction stayed with me through my studies at Berklee College of Music. When I graduated, I had an offer for a position writing and scoring for a recording studio in Houston. Serendipitously, the job did not materialize, and I ended up managing and breathing new life into a struggling music store. It was my first real taste of PR, sales, marketing, and the power of promotion. I was hooked.

Five years later, after I had successfully doubled the store’s sales, and had made numerous connections in the music industry, I decided that I wanted to work for a musical instrument manufacturing company. I hooked a job with Kramer Guitars as their Promotion Manager where I worked closely with the Marketing Manager and lapped up any tidbit that I could. In addition to promotions and planning events, I‘d write and distribute press releases, pitch media outlets, oversee photo shoots for ads and anything else that I could dig into. Within a year, I accepted a promotion as the new Marketing Manager. I was in!

I left Kramer when it was time to start a family and then ended up working as Marketing Director for a promotion company for many years.

Six years ago, I found myself living on the very same island as PRS Guitars. PRS GUITARS!!! Those drool-worthy instruments that I’d see on stage, all over the internet and in magazines!!! While there was not a PR position open, I convinced Jack Higginbotham, then PRS President, and Judy Schaefer, PRS Director of Marketing, to “try me” for three months.

WiMN: What are some of your favorite events that you coordinated?

JN: 2018 has been amazing event-wise! We’ve been on site at numerous festivals with The Music Experience, sponsored events including the She Rocks Awards, been a part of Guitcon which is like a guitar-centric YouTuber convention, and have a myriad of successful dealer events but I guess if I had to pick a favorite, it would be our own Experience PRS where we had over 3,300 people on sight at our factory for a two-day Open House.

This free-to-the-public event, which brought attendees from all over the world, included concerts, clinics, factory tours, interactive areas where attendees could play any PRS and much more. We had released five limited edition Experience PRS guitar models specifically for the event and had a dozen authorized PRS dealers on hand to help any end-user that wanted to take a PRS guitar home with them. In addition, we had the Johns Hopkins Kimmel Cancer Center team spinning a prize wheel for the Living with Cancer program, our flagship charity. (To date PRS has raised over $4M for patients and families at Johns Hopkins Kimmel Cancer Center.) Our buddy, Tyler Larson from Music is Win, was our Social Emcee for the event and worked with our team to let folks that couldn’t attend the event get a taste of the fun. Logistically speaking, it was an enormous project but the end result came off without a hitch. We’ll host another Experience PRS in 2020 and are already working on ways to one-up ourselves!

WiMN: What part of your job are you most passionate about?

JN: I wear a lot of hats for PRS which is both challenging and fun. If I had to pick one area of the job that I am most passionate about, I would have to choose a program that PRS thankfully has let me develop which I unofficially call our “Influencer Program.” It’s through this program that we work with online guitar teachers and guitar-centric YouTubers. These Influencers have a such a powerful voice in the market. They organically engage and motivate the public in so many ways, building trust in their brand and PRS simultaneously. I enjoy looking for the synergy within the group and exploring ways we can work together.

JN: Jump in and intern as soon as you can. Find a mentor, stay positive, and above all, be honest.

At PRS Guitars, by the way, a majority of the Director positions are held by women. Opportunities abound!

WiMN: Has there ever been a time you felt discriminated against in your field because of your gender? How did you overcome that?

JN: On a professional level, I’m very thankful that dedication, enthusiasm, and staying genuine has brought many opportunities my way. The gender roadblocks, that one often reads about, don’t seem prevalent in my life. I find that when I act professionally, I receive the same in kind. I know that this is not the case for every person in the field, but I find it a useful maxim to orient my behavior.

I do find it funny however that when I arrive at a new venue with my band, that people assume I’m a singer instead of the utility player covering tenor sax, alto sax, flute and keyboards.

WiMN: What’s next for PRS Guitars?

JN: I am so looking forward to 2019. Over the past few years, PRS Guitars has been enjoying a healthy growth rate which, I believe, is a direct response to the leadership, dedication, and vision of Paul Reed Smith with help from every craftsperson, salesperson, director, manager, and everyone here at the factory. We have a ton of great events planned, strategic new product releases, new artist alignments and I’m, of course, chopping at the bit to tell the world. Stay tuned!