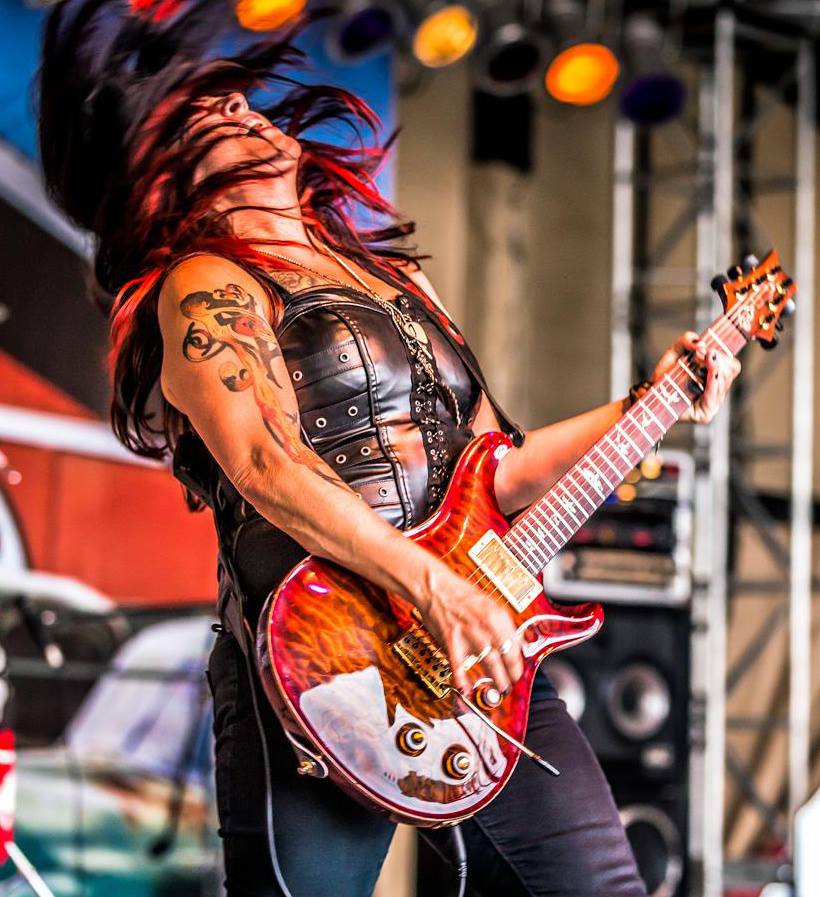 While Roni Lee’s main focus is on rock ‘n’ roll, she is by no means limited by genre. Her vocals and guitar techniques span various genres, from gospel to funk, and rock to soul.

Lee emerged from the late ’70s Hollywood music scene as lead guitarist for Venus and the Razorblades, in the process laying down the foundation for a brilliant life in rock ‘n’ roll.

As superb a songwriter as she is a guitarist, her best known song is perhaps the classic, “I Want to Be Where the Boys Are,” co-written by Kim Fowley and recorded by legendary rockers, the Runaways.

In her storied career she has worked with and opened for countless artists, including Van Halen, DEVO, Spirit, Loverboy and The Motels, and has shared the stage with remarkable musicians such as Jennifer Batten, Lynn Sorrensen (Bad Co.), and others.

She is a PRS guitars endorsee, is the founder of her own record label Play Like a Girl, a mom, and so much more!

Learn more about Roni Lee at ronileegroup.com and below.

WiMN: How long have you been in the industry, and how did you get started?

RL: I have played guitar since I was 15 years old (I was born in the mid-’50s). I began my career at pretty much the same time as The Runaways. Just after they formed, Kim Fowley was putting together another group called Venus and the Razorblades. I auditioned in a lame silver jumpsuit (given to me by Rick Derringer), with a Marshall stack and a Flying V guitar in an apartment on Gower Street in Hollywood (Kim insisted I should be playing the moment he walked in). Obviously, I got the job.

Prior to the Fowley audition, I was in Nevada working in an all-girl show band called April Ames and the Dames!  It was an amazing learning experience for someone my age (17) to work with some very talented jazz/pop female musicians. The keyboardist taught me so much. I started as a self-taught kinda “hack” with a ton of desire and drive, and came out of it able to read charts, play well with others (very important in a band), and how to LISTEN (also very important).

WiMN: What are some of your greatest accomplishments?

RL: After being hired by Kim, I was asked to write music immediately and quickly.  I had never written music before, but met the challenge. In fact, the first song I ever wrote was the song that has been the most successful:  “I Wanna Be Where the Boys Are,” which the Runaways also released on their Live in Japan album and in their recent movie. Others have recorded it as well since then.

I played bass guitar for the band Spirit and I also played in a trio at the time with members of Steppenwolf.  Later, in Seattle I worked with ex-members of Heart, Mike Derosier and Steve Fossen and many others. I also have a degree from San Diego State University in business that I received later in life. I have found that to be very helpful in this business,

The closest to my heart are three beautiful children currently 15, 22 and 33 that I have raised mostly by myself and are probably my greatest accomplishment. They are the reason I backed off touring and aggressively playing for their younger years.  I wanted to be with them watch them grow, but I am back in full force now.

In 2011 I was thrilled to receive a Paul Reed Smith guitar endorsement and was invited to play NAMM 2012 and am looking to return in 2013. I’m very excited to be recognized by such an honored organization. PRS loves women guitar players!

WiMN: You founded Play Like a Girl Records, which supports women in music. Tell us a little more about that.

RL: I founded the label at the beginning of 2012 when I started releasing some new music. This business has changed so much in relationship to labels and recording, with everyone doing their own thing. I wanted to have a label that was more like a co-op, a place to share information like distribution, promotion social media support, etc., to attract attention in a very tongue-in-cheek way to women in rock music.  At the label, we say, “It’s not really the gender, it’s the attitude.” We have featured male artists on the label as well, but I wanted to make the phrase “Play Like a Girl” have more of a meaning of strength, conviction, power and passion!

WiMN: Tell us about your involvement with The Runaways

RL: I pretty much covered that in the prior paragraphs, but on the personal side, Sandy West and I were roommates during the time we all lived in L.A. in 1977.  She was a very wonderful person. I can’t say enough kind things about her, really one of the most dedicated and talented musicians I have met. We lost touch in the 80s as well as with the other girls after the breakup. I was also very close to Joan. I don’t think it would be out of line to say that I was a guitar and song inspiration for her.  Joan was not competitive or jealous when it came to other women musicians, never the jealous type – always just the true rocker and person that she still is today.

WiMN: Aside from vocals and guitar, what other instruments do you play?

RL: Started out as a drummer (short-lived for like a month, LOL), play piano and a little bass if I have to, but I prefer to leave those instruments for the most part to people who excel at it.

WiMN: What bands are you currently in?

RL: Currently, I have the Roni Lee Group (original music), and a women tribute to rock show called “S!rens of Rock.” We are still in production but hope to be ready by November to perform.

WiMN: What did you want to be growing up?

RL: Originally a cowgirl, but after hearing the Rolling Stones for the first time, a musician. I remember thinking, “It’s not enough to meet them, I want to play in the band, I want to be the one standing there with a guitar in my hands!!”

RL: Jeff Beck, for sure. It is how I got my first “gig.” I had spent countless hours with a record and a stylus learning most of the Blow by Blow album. It pretty much killed any social life, but I am of the opinion that it takes that kind of dedication and sacrifice to be a good musician or really good at anything you have a passion for. If it was easy, everyone would do it; this ain’t Guitar Hero.

WiMN: Tell us about challenges you’ve faced being a woman in music.

RL: Ha!  Well, I need a novel but I guess the biggest thing is: belief.  When I say to someone that I am a guitar player (especially another, say, accomplished musician and usually male), even now in 2013, the expectation is that I strum along to accompany my singing. Even though I tell people I am a guitarist who sings, not the other way around. Then, when they see me play, the reaction is always stunned. That surprises me to this day.

WiMN: What are some of your current projects?

RL: Finishing an EP titled Love Myself Today, and producing a video for “I Wanna Be Where the Boys Are” (a throwback tribute to the “day”) in L.A. in October, as well as preparing for fall tours in the Northwest.

WiMN: What are some of the biggest names in music you’ve shared the stage with?

RL: My bassist is Lynn Sorrensen (Bad Co.), my drummer is Jeff Kathan (Paul Rogers).  I usually play as a power trio, but here in SoCal, I work with others as well.  Jennifer Batten (former Michael Jackson guitarist) has joined me, as has Alvin Taylor on drums (Elvin Bishop). I mentioned before, I played as a bassist for Sprit, guitarist for a version of Steppenwolf; and formed a short-lived band with Heart drummer Mike Derosier and bassist Steve Fossen. Recently, I did a return to the stage show with Cherri Currie in San Diego, and re-united with Joan when we both played the same venue this year.

WiMN: Any exciting plans lined up for the future?

RL: Very excited about the tribute to the women in rock I am putting together right now as well as new material I am still co-writing with Kim Fowley for some younger bands.

WiMN: What are some changes you’d like to see in the music industry?

RL: Again, another novel.  The music industry has changed so much I began in the ’70s:  Everyone can record an album in their house; there are very few major record labels mostly interested in pop; musicians of both genders now have to self promote, self record, self distribute, leaving very little time for the actual music; etc. And, the public, depending on the area, seems to find it easier to view their music on Facebook or on-line videos rather than leave their house for the live show. That is sad because what is missing online is that live excitement!  I guess what I would like to see a return to the live interaction between the musician and the audience so we can share the love and sweat!