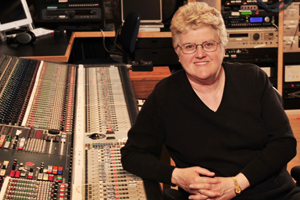 Today we are thrilled to feature another 2016 She Rocks Awards recipient, recording and mixing engineer Leslie Ann Jones.

Working in the business for over 30 years, Jones engineered at many studios before accepting her current position as Director of Music Recording and Scoring at Skywalker Sound in Northern California.

Jones has worked with such artists as Herbie Hancock, BeBe & CeCe Winans, Marcus Miller and more, while contributing her recording and mixing talents to television and film scores like Apocalypse Now, among many others.

Today, Jones continues her engineering career recording and mixing music for records, films, video games, television, and commercials. She has won numerous Grammy Awards for her engineering work, and will soon add a She Rocks Award to her list of accolades!

WiMN: What was your introduction to music as a child?

LAJ: My parents were both in the music business. My father was bandleader-satirist Spike Jones, and my mother, Helen Grayco, was a singer.

WiMN: What attracted you to audio engineering?

LAJ: I was a guitar player and singer in my teens and early twenties. Although I did quite a bit of recording, it was from the other side of the glass. At some point I had sound equipment and formed a PA company with friends and decided I really enjoyed mixing and the freedom I had to be creative with sound. I was hooked!

WiMN: Describe one of your most memorable sessions.

LAJ: That is hard because I have had so many memorable sessions. I guess it would be the first time I worked with Peter Matz, the great arranger. I was always a fan of his work, even as a child, so it was a thrill when I was finally able to work with him.

WiMN: How do you approach engineering and mixing for music, versus movies, television or video games?

LAJ: Well, there are technical differences, different terminology, and a different end user. But the truth is my approach is very much the same. I try to translate what the composer or artist is creating. They hear in their head what they want, or they have composed it on paper. My job is to have that come out of the speakers in a way that represents their artistic intent.

That sounds simplistic—but with the right microphones, studio and a great staff to work with—it happens. And it is a real joy.

LAJ: I am a recovering guitar player.

WiMN: Can you tell us about some of the projects you are working on currently?

LAJ: Well, my most recent project is also memorable for me. I got to spend a couple days recording Lisa Fischer and JC Maillard. They are doing a project for Alonzo King’s Lines Ballet, here in the Bay Area. I have such respect for their talent. It was a quite a thrill for me.

I am also producing and engineering Ann Moss’ second album. Ann is a wonderful soprano who loves collaborating with contemporary composers, both classical and pop. We have a lot of fun working together.

LAJ: Having a good sense of humor helps. I learned long ago to ask for help when I needed it and not try to think or act like I could do everything. When I first started there were always moments when I’d be in the control room and the client would walk in and ask where the engineer was. I had to say, “I’m your engineer.” But once I got a drum sound all was right with the world!

WiMN: Do you have advice for young women who might be considering a career as an audio engineer?

LAJ: Don’t make plans on a Friday night???? The technical stuff is not as challenging as the hours. People skills are very important. Raise your hand and ask questions and find a mentor. For the best DAW software to be purchased for a home or small studio, there are a few features that you must consider.

LAJ: Well, this award really means a lot to me, especially considering all the past recipients. I’m glad to represent the technical and creative side of the studio. And I am very happy Laura started this event as a way to single out all the great women in our industry.