To say Butterscotch is multitalented is an understatement. Her style is eclectic and ever-evolving. She is a one-woman phenomenon incorporating looping with beatboxing, piano, guitar, flute, saxophone, and bass – all she plays herself. Her genre is an infusion of jazz, soul, hip hop and R&B. Her live shows are an energy exchange of music, inspiration, and creation.

Born Antoinette Clinton, her stage name Butterscotch perfectly describes her style, “smooth like butter… hard like scotch.” A proud LGBTQ team player and activist, she began her career in the underground world of beatboxing, and was crowned the world’s first female beatbox champion in 2005. Following that was her performance on America’s Got Talent in 2007, to which she won 3rd place and gained worldwide recognition. She has performed around the globe extensively in places like Russia, Switzerland, Sweden, Denmark, Morocco, Hong Kong, China — and of course, the U.S. — opening for Erykah Badu, Thievery Corporation, Tony Bennet, Talib Kweli and KRS-One. Butterscotch has also performed alongside legends such as Earth, Wind & Fire, Sergio Mendes, Bobby McFerrin, Nile Rodgers, LA Philharmonic and the WDR Big Band, to name a few. 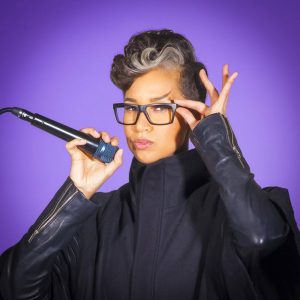 And when she isn’t performing or creating new music, Butterscotch loves giving back to her community by teaching beatbox workshops in various community colleges, high schools, and elementary schools. Her latest album, The Scotch Tapes, features the single “We Are All We Got” in collaboration with Grammy Award-winning Producers Neff-U and Mischke Butler.

Learn more about Butterscotch at butterscotchmusic.com.

WiMN: How would you best describe your music. Does it fit into a genre?

B: My music is a combination of hip hop, jazz and R&B. It’s not one specific genre, but its core is soul music translated through my ears – or my mouth rather.

WiMN: Where were you born? Where are you currently residing?

B: I was born in Sacramento, in a van, at the corner of Fair Oaks and Watt. I always joke that’s why I’m always on the go… came into this world on the move! I’m living in Oakland now when I’m not traveling.

B: My mentors were some of the teachers I had at school that helped me through rough times. My idols were Michael Jordan, Whitney Houston, Mariah Carey, 2Pac and anyone from the WNBA.

WiMN: How did you get your start as a public speaker? How has this impacted your music?

I started to perform at a lot of different conferences (similar to the TED Talk vibe) and I was incredibly inspired to tell my story. I’m still working on perfecting it, but I have now found it gives my shows a more personal touch, rather than me just getting up and performing and not explaining my background and mission.

B: I like legos. But who doesn’t? Well, no one ever likes stepping on them.

WiMN: Tell us more about your beatbox workshops.

B: Whenever I’m on tour, I love to stop by schools, in different cities, and teach kids how to beatbox. I also share my story and I hope I inspire them to live their dreams.

WiMN: What advice would you give women who are considering music as a career choice?

B: Stay true to yourself. Be authentic. Show your process, be vulnerable in your writing, but watch out for the sharks in the music industry. Get a lawyer if you don’t have a manager to look over tricky contracts.

WiMN: Where do you see the future of music for women in the next 5 years?

B: We’ll be more prevalent at music festivals and I hope to see more all-female bands. It shouldn’t be a challenge to create a badass band, it’s easier in NYC and LA, but it would be cool to see it as the norm, just like it is now with pretty much all-male bands.

WiMN: Has there ever been a time in your career that you were discriminated against for being a woman in the music industry? If so, how did you overcome it?

B: I haven’t faced too much discrimination, but I can’t stand when I have meetings with people in the industry and they call me “sweetie” or “beautiful” or something demeaning. The biggest challenge used to be determining whether people actually wanted to help, or just get in my pants. With all the #MeToo allegations going on, I’m very fortunate no one ever sexually took advantage of me. As I’ve gotten older I can now weed out who’s real and who’s not. I generally trust those who say they can’t promise me anything, but will try and help, vs those who promise the world and never deliver.

B: I’m working on an awesome album with Chief Xcel (of Blackalicious) and that will be released early summer, with some teasers before. Gearing up to create more videos, and get back on the road in the summer as well. I’m so happy to have this time to create and do what I love.