Adrian Conner is a seasoned pro. With her eighth album Hush! being funded completely by the support of her fans, it’s clear that she’s in it for the long haul. The multi-genre Conner recently switched up her signature rock ‘n’ roll grit for a more mellowed-out, acoustic LP, but in no way has she forgotten her roots. 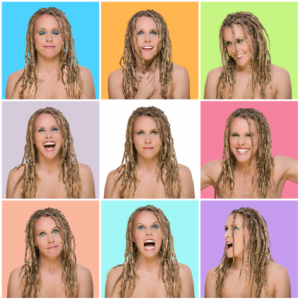 When not performing her solo works, you can find her jamming out with her AC/DC tribute band, Hell’s Belles. Read on to find out more about Conner and her experiences and inspirations regarding the music industry.

AC: Recording Hush! was a much faster process. The songs are newer versions of previously recorded material except for the two covers [“Little Wing,” “Bron-Y-Aur Stomp,” and the bonus track]. We set the click, and the drummer and I started recording.

I brought Melissa Carper (stand up bass) along later. Stand up bass and acoustic guitar are a complete departure from my original recording style. A couple songs have totally different feels from their original forms. On some songs, it brought more of a country element to the table; on other songs it brought in an ease, making the music more accessible.

WiMN: What was your inspiration on making a fully acoustic album?

AC: I am really into touring and playing shows, because it makes me a better player compared to when I’m sitting in my room practicing. I have to share myself with the world to improve my craft.

Touring seven nights a week is hard, especially when you don’t have the proper representation leveraging your act onto big shows. Full-on electric sets during the week on tour are really hard to pull off – but acoustic, that’s much easier on the audiences’ ears. People can dance, or they can listen but still carry on a conversation if they so chose.

I love playing acoustically because I can hear my voice, and really play with its dynamic range. I also love it because the guitar is so naked; any kind of mistake can be glaring. Where as with electric, the loudness and distortion can easily mask problems.

WiMN: You had such a successful crowdfunding campaign for Hush!. How does it feel knowing that your fans were incredibly excited to hear your new music?

AC: It’s so wonderful to be an artist at a time when superfans can create longevity for an artist’s career. I am thankful that I am able to excite people with the prospect of playing and recording music.

The crowdfunding process is much more direct compared to the days when the big labels had a clamp down on the ability for artists to put out music. Between technology and superfans, creating music and putting it out into the world is a much easier process; surviving is now the challenge. There are so many bands, and so much music, so it’s difficult to get attention and to then grow a fan base. I am so blessed to have the support from fans to put out more music.

AC: My band mates are my favorite part, with my second favorite part being the incredible music: AC/DC’s music is magic. The stage show that my sisters and I put on is a true rock ‘n’ roll show, created originally by AC/DC. We run with it and make it our own.

It’s very rare that we have bad show. We are able to work a room and it’s so fun to do that together… I love my band Hell’s Belles. I’ve had other AC/DC tributes ask me to sit in and I can’t do it. It takes a special energy to work up into that rock frenzy, and if I don’t have my sisters by my side, then I can’t rally that energy.

WiMN: You opened for the legendary punk goddess Brody Dalle (!!!) back in 2014 right before her first solo album, Diploid Love, was released. Tell us about that experience.

AC: Brody is a musical hero to me. My 2006 album and my 2011 7 inch vinyl release, Criminal, is heavily influenced by her songwriting. So needless to say, I was SUPER excited to play knowing that she was listening backstage. We killed it that night at Slim’s… It felt good to play in front of the sold out crowd, and be able to hold their attention. The crowd loved us. Victory!

WiMN: Who are your biggest musical influences?

AC: Gaining influences never stops for me. Performance wise, Karen O and Angus Young are huge influences. Recently added to that list is Teri from Le Butcherettes. Songwriting wise, Led Zeppelin, AC/DC are cornerstone. But I’m into so many artits: Daft Punk, and 80’s pop much to the chagrin of my loved ones. Janelle Monáe, Heartless Bastards, the latest Wilco album, Kelis, Alice Cooper, Iron Maiden, D’Angelo, Spoon, Skrillex, Norah Jones… I’m getting into Hip Hop 20 years late, with exception to Missy Elliott and Outkast. If someone comes out with a good album, I can be hooked no matter the genre.

WiMN: In what direction do you see yourself going musically within the next five years?

AC: I started playing bass and I’m using that to help me write. I’m using Garage Band more than ever. For my ninth album, I just want to be true to the muse and not TRY to make it something that it isn’t – I want to love it. And if I don’t, then just trash it and find something I do love. I will probably incorporate acoustic guitars more often, as that transfers so beautifully to recording.

WiMN: What’s the best piece of advice you have for other women in the rock industry?

AC: Avoid being competitive with each other. Avoid being a diva – be a Diva ON STAGE. Be a decent human being off stage. Keep your word. Listen to your heart. Always listen to music. And have love for yourself.