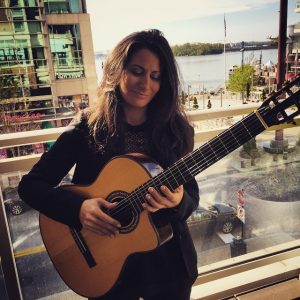 Imagine, for a minute, that you’re listening to a performance of beautiful flamenco and classical guitar. Then, imagine looking at the face of the performer and realizing you’re watching a teenage girl. Many people would be pleasantly surprised, as the traditional image for that style of guitar used to be of an adult man. Yet a teenage girl is exactly what you’d have seen in the childhood home of Elysa Hochman whenever you heard flamenco or classical guitar playing.

Having been introduced to the guitar by her father, Hochman studied those styles growing up, and then again as a music major at Columbia University’s Teachers College after deciding to share her love of guitar with others as a certified instructor. However, the story does not end there. Since then, Hochman and her husband Jay went on to form the classical and flamenco guitar performance duo “Jay and Lee,” who perform original and cover compositions around the world at private and public events. She is also the owner and an instructor at New York Guitar Academy, which is an all-ages teaching program for acoustic, classical and electric guitar that gives students a well-rounded sense of the various ways to play guitar – many of whom are girls.

Below, Hochman shares her fascinating story with us.

For more on Elysa Hochman and the New York Guitar Academy, check out NYGuitarAcademy.com.

For more on Jay and Lee, visit SpanishGuitarDuo.com.

The WiMN:   How were you first drawn to study Spanish, Classical and Flamenco guitar? About how old were you?

EH: I was 14 years old when I wanted to learn to play guitar. My father taught me how to tune the guitar and some basic open chords. He gave me his Beatles book that he taught himself with. I started teaching myself those very same songs. I was lucky enough to have guitar offered in my high school and I enrolled in the guitar program that was taught by Melissa Morris. She was an amazing teacher!

I initially loved the sound of fingerpicking and percussive strumming on the guitar and began learning classical guitar. There were no home computers or internet searching at that time. I would go to the library, book stores, music stores and record stores to find music and instructional books to learn from. I loved all the Spanish, melodic and romantic-sounding music for the guitar. I stumbled through a “flamenco study” in one of the classical guitar books I was learning from and I fell in love with this study.

From there I began researching flamenco guitar. I found great books and music from Juan Serrano and Juan Martin and other great flamenco guitarists. I began learning this style on my own. I became obsessed with the rhythmic strumming of flamenco guitar and the beautiful romantic sounds of the Spanish classical guitar. I had a strong, internal desire to master and perfect it.

The WiMN: As you were learning, how did you develop the discipline to stick with what are rather intricate styles of playing, for the most part?

EH: I genuinely enjoyed and loved playing guitar. I was not planning on making guitar my career when I was learning to play; I just played for myself. I would play for hours because I loved playing. I loved reading and playing though music, and creating music. It was like reading a book or watching a movie to me. I grew up in a large and loud family with seven children. Now that I look back, I feel that playing guitar was my way of escaping the chaotic household. I was able to just channel in the beautiful sounds of the guitar as opposed to listening to the other noises in my home.

The WiMN: What are some of the most memorable places you’ve performed as part of your Spanish guitar duo “Jay & Lee”?

EH: It’s difficult to pinpoint all the great places that I have performed in over the past 10 years. Performing at Lincoln Center for the Women in the World Summit reception hosted by Tina Brown and Meryl Streep with Hillary Clinton as one of the guest speakers was a huge highlight! Performing at pregame shows for the U.S. Open Tennis Finals was superb! I’ve performed at many museums and mansions including the opening of the Picasso Exhibit at the Barnes Foundation. I performed at many corporate events including McGraw-Hill’s 125th anniversary party with guest speaker Mike Bloomberg. I have played at many celebrity parties and weddings.

One of my favorite celebrity events was playing at a beautiful VIP party for Tory Burch. A favorite celebrity wedding was playing the ceremony and cocktail hour at America Ferrera’s wedding. I can never forget the time I was flown out to play in the Rocky Mountains in British Columbia at an absolutely stunning wedding! That was just an unbelievable trip with the most unforgettable views – it was absolutely gorgeous.

The WiMN: Congratulations! You’ve recently celebrated the 10th anniversary of opening your New York Guitar Academy for acoustic, classical and electric guitar. How did this school come about, and what was your vision for it?

EH: Thank you very much! The short story is….the school opened when I became pregnant with my first child. At that point in my life, I decided that if I was going to open my own music school, New York Guitar Academy, with the help of my husband Jay, if I did not open it before I gave birth, I’d never open it. I knew my life would change once I became a mom. I had to take the risk before that change came.

The long story is as follows…12 years ago I decided to change my career and become a full time music teacher/musician. I was working in the business industry after I graduated college with a Business degree. It was not the right fit for me. I decided to go back to school to get a Masters in Music and Music Education from Columbia University’s Teachers College. My initial vision was to become a certified music teacher. Once I enrolled in the program, I wanted to level up my guitar playing since guitar was my main instrument. I decided to create a study abroad program for myself to study in Andalusia Spain where I would learn the pure art of flamenco guitar from where it originated. I studied in Jerez de la Frontera and Granada for six months with the greatest flamenco guitarists in those regions. It was a life changing experience. My husband, Jay, joined me on this trip and studied flamenco guitar with me as well.

When we returned to New York, we were contemplating opening up own music school – a specialty guitar school – upon my graduation from Columbia University. At this same time, I got pregnant with my first child. Hence, I birthed New York Guitar Academy and then a few months later, my first child, Joseph!

While Jay and I were starting New York Guitar Academy, we did need another source of income to help us as we grew our business. We started performing on the side as “Jay & Lee.” We never stopped this side job! We naturally kept getting hired and accumulating great reviews throughout the web. Jay and I love performing together as a solo act and as an ensemble with others. Today, I am a mother of two boys who both play guitar (and piano!), a professional musician, and a director and instructor at New York Guitar Academy. 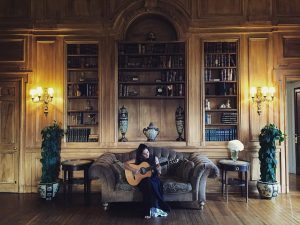 My vision for New York Guitar Academy is to bring world fame to the school through our great curriculum for learning to play guitar. We have an amazing niche for teaching both children and adults how to play guitar through classical, flamenco, rock and blues guitar styles.

We released our first book in May 2018 through Mel Bay Publishing Company, one of the top guitar music publishing companies world-wide. It’s a beginner to intermediate book with songs and studies for the classical and flamenco guitar that Jay and I have created throughout our years of teaching. We have just completed a volume 2 for this style that we plan to release this year. We are also working on a rock and blues volume as well.

The WiMN: While your guitar academy teaches traditional guitar technique and some rock/blues style lessons, it was nice (and surprising!) to see a number of videos on your site showing young students performing flamenco pieces. How do you attract a new generation of players to classical styles of guitar?

EH: We do have a niche for teaching the style of classical and flamenco guitar to children and adult beginners. We create curriculum, songs and etudes (studies/scales) for our students to fit their learning style and to be within their zone of proximal development. The songs and etudes we compose for absolute beginners sound like beautiful music. They learn to play very melodic, easy-to-play and fun-to-play music. Honestly, we find that many students don’t care what style of music they are playing. They just care about how it sounds. If I play a song to a student and they like the way it sounds, then they’ll want to learn it.

With this foundation, students can play any style of music on the guitar. They are learning all the same chords and scales as well. They can now take this classical and flamenco foundation and implement it with rock if they’d like. We also teach lots of our students both classical/flamenco and rock/blues guitar.

The WiMN: The academy also seems to attract a fair number of girls and women to the program. What are some things you do to inspire more females to play the guitar and feel comfortable taking lessons?

EH: Yes, we do have a lot of female students. We don’t do anything specifically to attract females or males. We try to share with everyone via social media, our website and our student shows what we do. One thought we’ve investigated is that it’s possible that women and parents of girls see lots of other women and girls succeeding in playing the guitar at our academy and decide to learn with us. 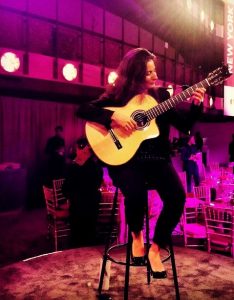 The WiMN: What would you say to young women in our audience looking to make music their career?

EH: Perform as much as possible. Perfect your set for a concert. You should always have a strong set that you are comfortable performing at any time. At the same, time put yourself out there and don’t be afraid to fail. Keep trying until you get it right. Do not compare yourself to other musicians. Try your best to focus on you and not others. Collaborate with other musicians. Create your own arrangements of music and/or your compositions. Learn other music as well, to keep yourself inspired. Do not sell yourself short and do not miss out on an opportunity.

If you are looking to become a music teacher, I recommend you do get Suzuki certified in your instrument. Suzuki is a method of teaching musical instruments to young children from ages three and up. Many times there is a shortage of female instructors in music schools, and many parents do prefer a female instructor at this very young age. You will most likely be able to find a job teaching your instrument to young children if you are interested in that type of work. 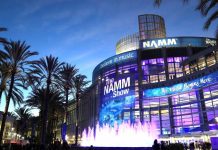