Pauline France is a multi-talented guitarist, 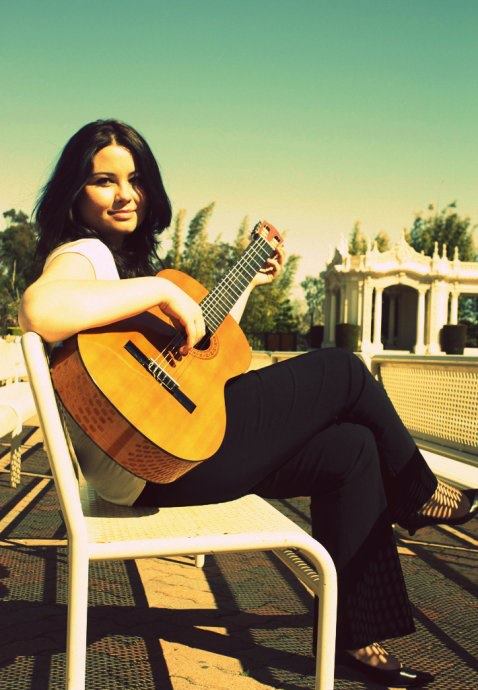 When she’s not performing or teaching private guitar lessons, France is garnering publicity for one of the world’s largest and most popular instrument manufacturers, Fender Musical Instruments Corporation.

France holds a degree in public relations from San Diego State University, is the founder of Guitar and PR, is a classically trained guitarist, and is the winner of the WiMN’s 2013 She Rocks! “Next Generation” award.

WiMN: Where did you grow up, and how were you introduced to music as a child?

PF: I grew up between San Diego, Calif., and Tijuana, Baja California, Mexico.

When I was 8 years old, my parents decided they wanted me and my sister to have a bicultural and bilingual upbringing, so we packed our bags and moved to Mexico. That was a great decision that has had a positive, lifelong impact on me.

When it was time for college, I moved back to San Diego and pursued a career in public relations at San Diego State University. I also studied advanced music theory extensively at Southwestern College.

WiMN: When did you start playing guitar?

PF: I was 15, and the way I picked it up is kind of funny. I was in a chat room, and a girl named Giovanna Garcia was asking who wanted to start a band. I said “Me, me!” and she told me I would be the guitarist. At that point I had absolutely no idea how to play guitar, but I went with it anyway.

We met in person and went to Guitar Center, where I bought my first-ever guitar, a black electric Squier. My parents, however, said they’d only buy the guitar for me if I took lessons.

So my mom drove me to the Centro Hispanoamericano de Guitarra, which is part of the Conservatory of Baja California in Tijuana, and it just so happens that the only teacher available that day was a classical guitar teacher, Teresa Madiedo. She cringed at the sight of an electric guitar, and sent me back to Guitar Center to exchange it. That’s where my love affair with classical guitar began.

Oh, and the band with Giovanna never happened, but I always credit her for being the reason I picked up the guitar.

WiMN: You also teach guitar. How did that get started?

PF: I love teaching. I started teaching at 17 and that’s basically how I got myself through college. I started teaching at a school in Chula Vista, Calif., called Family Fine Arts Academy. It was my first formal teaching job, and I was handed a textbook and was literally thrown into a classroom full of children. I was terrified, but it worked out beautifully.

After that I juggled between private students, group classes at Hollywood Studio in National City, and San Diego State University’s EOP program. Nowadays I teach privately.

WiMN: Who were some of your biggest inspirations while you were starting out?

PF: The Gypsy Kings piqued my interest in guitar when I was 12. I kept listening to their songs over and over again trying to figure out how it was humanly possible for so many notes to come out of one hand. When I found out how, I became fascinated by the ability of one person to create rich, orchestral sounds with five fingers.

Also, my first teacher Teresa Madiedo. She is Cuban and has composed some of the most exquisite Latin-American music I have ever heard.

WiMN: You’re a classically trained guitarist who also plays electric. What’s it like transitioning between the two? What do you enjoy about each style?

PF: If you’re a classical guitar purist–which I’m not–transitioning is almost considered ungodly. I still have a hard time improvising on the drop of a hat, and that’s probably because I am used to having sheet music in front of me at all times. But that’s ok, because that’s not what I studied for.

Classical guitar can be quite rigid and systematic. When it gets too mathematic, I pick up my electric guitar and crank up the distortion to play one of my all-time favorite genres of music – metal.

Electric guitar serves as a relief where I can loosen up and have fun without worrying about my posture, or if my thumb is showing above the neck, for example. However, I never get the same satisfaction from electric as I do from classical. There’s something about pure, non-altered music and the contact with nylon strings that makes for an intimate, ethereal experience.

WiMN: Tell us about how you got started at Fender.

PF: I started off as an intern and heard about the position through Premier Guitar’s online editor Rebecca Dirks, whom I met through the magazine’s associate editor Jason Shadrick.

I had a few weeks left before graduating, and applied along with nearly 20 other applicants. After several rigorous interviews, I was offered the position and had a paid internship secured right after graduating.

After the internship concluded, I was offered a permanent, full-time position as the company’s public relations coordinator. It was my first real job fresh out of college.

WiMN: What is your typical day at work like?

PF: It’s truly exciting to go to work every day because there’s so much variety to it and because I work with great people, starting with my boss and mentor Jason Farrell.

One day can include anything from writing a press release about our latest products, to running into George Benson in the office, taking a call from a global news station from Brazil and pitching Cosmo for their holiday gift guide. It’s crazy and I love it!

There’s also a lot of mundane work, but it’s all fun as long as you love what you’re doing.

PF: I’ve been doing PR since I was 6 years old. I was in first grade on my way to the cafeteria with my friends and my lunch box, and we were stopped by the principle and a local news station camera crew. They asked if they could take our lunch in exchange for cafeteria money because they had to do a segment on the quality of lunch children were eating.

They could only take three lunch boxes, and there were four of us. That was the first time I pitched a reporter, and I got them to bite… literally!

Before my love for PR came my love for people, though. I believe one of the core foundations of this profession is to develop genuine relationships with people even if there’s nothing in it for you. One of my favorite quotes is “You can easily judge the character of a man by how he treats those who can do nothing for him.”—Malcolm S. Forbes.

WiMN: You were honored by the WiMN at the She Rocks Awards! Tell us about this experience.

PF: I was truly humbled and in a total state of shock. I couldn’t believe I was receiving an award along with industry giants like Holly Knight and Orianthi.

More than anything I was thankful because WiMN Founder Laura Whitmore believed in me. It takes a visionary and a generous spirit to do the wonderful things that she is doing.

PF: There will always be challenges regardless of your gender. The most important thing is to be comfortable in your own skin, whether you’re a man or a woman. People will learn to respect you because you respect yourself.

Also, I carry myself professionally and have never been self-conscious about being a woman. That has served me well.

WiMN: Can you offer any tips to beginning guitarists or women aspiring to enter the music industry?

PF: Educate yourself.  Read, read, read and go to school. Love yourself, believe in yourself, and don’t listen to people who say you’re not good enough, because they’re just projecting themselves.

Also – don’t be afraid to ask questions.  Oh, and don’t be entitled and arrogant because you won’t get far. Remember that you have to crawl before you walk, so work hard and work smart.