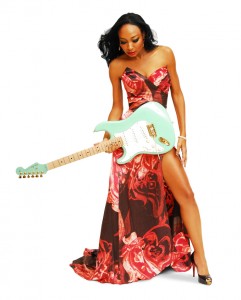 Moye’s musical narrative boasts an impressive resume that includes making history as the first African-American woman to play the National Anthem on guitar at a professional sporting event, all the way to performing at the Rock & Roll Hall of Fame tribute concert for music pioneer Chuck Berry.

Moye was praised by Jet Magazine as “the highlight of the evening” after she headlined the largest peace concert on the west coast with Chaka Khan honoring legendary humanitarian Stevie Wonder, and was the first left-handed female player to join the critically acclaimed 2012 Experience Hendrix tour.

Moye is poised to release her new album Rock & Roll Baby in 2014, but first, she’ll make a stop at the She Rocks Awards to deliver her intoxicating fusion of funk and rock.

Below, check out Moye’s latest video for “Kyotic,” which features funk legend Bootsy Collins. You can learn more about Malina Moye at her official website, and buy She Rocks Awards tickets here.

WiMN: How did you discover music as a child and what made you want to pursue it as a career?

MM: I come from a musical family. I told my mom when I was seven that I wanted to play music and travel all around the world doing it.

WiMN: How did you end up playing lefty and upside down?

MM: My dad gave me a guitar and I turned it upside down when he left the room because I couldn’t play it the other way. I’m naturally left handed.

WiMN: You collaborated with Bootsy Collins for your song “Kyotic.” What was is like to work with such a legend?

MM: Incredible. Bootsy is a legend, an icon, a pioneer, but most of a very humble guy. I learned a lot and was excited to work with him.

WiMN: Tell us about your upcoming album, Rock ‘n’ Roll Baby. Who did you collaborate with on the record and what separates it from your previous releases?

MM: It’s more guitar-driven. I like to think of it as funk rock with mainstream appeal. Mark Needham (Killers, Pink, Imagine Dragons) is mixing it now. I’m excited to share it.

WiMN: What is one piece of advice you’d offer to a young female guitarist who would like to have a career in music?

MM: Be epic, be fearless, but most of all, be you!! Learn your instrument. Play with people better than you! Be a sponge.

WiMN: Who are some of your female role models in the industry – artists or otherwise?

MM: Oprah for one. I love the fact that she just surprises people. I feel that sometimes people need to feel that good things can happen. I also loved Steve Jobs’ philosophy, not from necessarily from a women’s perspective, but I love how he saw things: “I’m not better, I just think different.”

MM: I think within any industry there will be challenges, but as a woman in music, you need to be fearless, know what you want, and stick to your guns. And work a little harder than the next man.