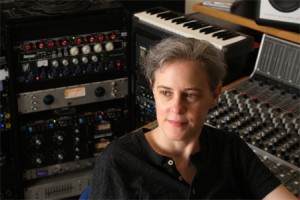 In 2003, producer/engineer Terri Winston founded the Women’s Audio Mission (WAM), a nonprofit organization based in San Francisco dedicated to the advancement of women in music production and the recording arts.

A multi-instrumentalist, Winston spent much of her earlier years on the road with artists like P.J. Harvey, The Pixies and The Flaming Lips.

By providing women and girls with training in music production and recording technologies, WAM is helping to introduce females into a field in which they are critically under-represented, while giving them the support and knowledge to succeed within it.

We’re honored to feature Terri Winston for this week’s Front and Center. You can learn more about WAM at womensaudiomission.org.

WiMN: How were you exposed to music as a child? What made you want to pursue a career in music?

TW: Back in the day they still had music programs in public schools – imagine that! I learned the usual suspects; recorder, guitar and played trumpet in middle and high school band. I am really lucky I was exposed to music in school because my family wasn’t very musical and I loved music. I am the poster child for the importance of music programs in schools. It saved me. I learned how to read music and play multiple instruments. It has helped me a lot in my career.

WiMN: Tell us about the Women’s Audio Mission. What is the mission of the group and what do you offer?

TW: Women’s Audio Mission focuses on getting more women and girls into music production and professional audio. We are the only professional recording studio in the world run entirely by women. We’ve recorded GRAMMY winners Kronos Quartet, the acclaimed author Salman Rushdie, master musicians from all over the world (Vietnam, Mongolia, Brazil, Peru, Mexico, Japan, Sweden and Turkey) as well as many independent artists in the San Francisco Bay Area.

We train over 600 women and girls a year in the recording arts in our facility through our adult and youth programs. We have a membership program that provides job placement, gear discounts, free webcast lectures, and more to over 850 women audio professionals from all over the world. We have a popular online training materials library that serves over 6,500 students every year in audio programs and colleges all over the world, and our social networks on Facebook and Twitter reach over 9,000 subscribers.

WiMN: Women are critically under-represented in the production and recording arts. Why is this the case and how is WAM working to change this?

TW: I suspect women aren’t as attracted to production technology because of the ways girls are socialized around technology. WAM focuses on methods that we know are successful in drawing girls and women to technology and then making sure they have the skills and tools to have an amazing career. We provide the training and access to a professional recording studio so that women and girls have an inside look into the world of music production and professional audio.  We remove any obstacles that are between them and their comfort with the large amount of technology used in this industry.

WiMN: You have lots of experience as a performer and musician. What instrument(s) do you play? Are you still performing live? What are some of your favorite tour or studio memories?

TW: I play guitar, bass, program drums, sing and write songs. I don’t perform live anymore. I mostly spend time in recording studios producing and engineering other artists. Some of my favorite tour/performing memories would be playing with P.J. Harvey on the “Dry” tour, many awesome shows with the Pixies and Throwing Muses, a crazy outdoor show with the Flaming Lips at Union Square here in SF. Recent studio sessions that have been really amazing – Kronos Quartet (soundtracks for the documentaries “Dirty Wars” and “Monir”), Nutgiin AyalGuu (Throat singers and musicians from Mongolia) and recording the SHE’S, an incredible all-teen girl band.

WiMN: What is one piece of advice you’d offer a band entering the studio for the first time?

TW: Work with an experienced producer, and hopefully do pre-production with them so that you can learn the ropes on how to make a great-sounding record and not waste studio time and money. It’s way more expensive to try to “fix” a bunch of poorly recorded tracks than it is to cut great sounding tracks in a recording studio with a professional engineer and producer.

More advice if you want it: practice to a click track and be able to record with a click track. This can make tracking and mixing go a lot faster. If you want to make a record that is 10 songs long, record 15 songs and pick the best ones. Some songs don’t translate as well as you think in the studio and some sleepers can become stellar.

WiMN: Who is a female role model of yours in the music industry – an artist, engineer or otherwise?

TW: As with any career there have been a few challenges but I have spent my entire life in male-dominated careers so I am very comfortable with that.

My dad’s an engineer and I grew up in research labs around engineers that were always pulling pranks on me. That’s where I learned to develop a thick skin. That comes in handy when I have to weather the occasional bad apples that exist in any industry. But there are way more good apples than bad so it’s best to just move on, spend time with the good apples and have laser-like focus on what you want to achieve. It’s a waste of energy to try to educate the bad apples or figure out why they say crazy, sexist things.

WiMN: Any words of encouragement for aspiring female engineers or musicians?

TW: Be a YES person, be a lifelong learner, work harder than you ever thought you could and remember there is no one else like you.