Throughout July we’ll be featuring artists who are making an appearance at our upcoming Women’s Music Summit. 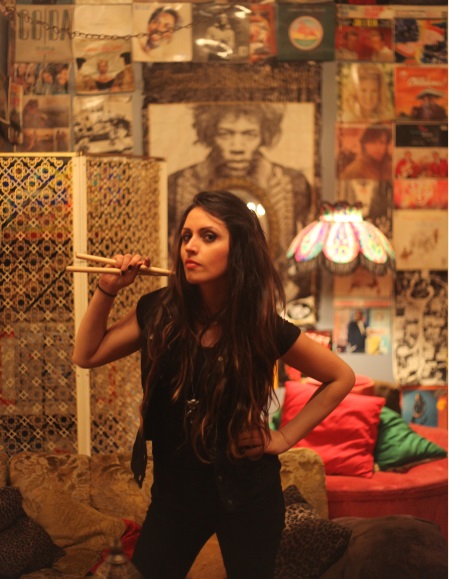 She hails from a musical family, experimented with several instruments, then picked up drum sticks and never looked back.

Sepulveda celebrated many accomplishments in her native country of Chile, but left to pursue better opportunities in the United States where she didn’t waste a single moment. She recently won the 2013 Hits Like a Girl competition, and is scheduled to appear at the Women’s Music Summit.

Check out Val’s Facebook page here, and sign up for the summit to meet her in person.

WiMN: How were you introduced to music? What attracted you to the drums? Who were some of your biggest influences when you first started playing?

VS: My whole family is very musical; my parents and siblings play the guitar, the piano, the organ, and sing. I remember as a little girl waking up to my dad singing and playing the guitar, it was often a song that he had composed. I would go to bed to my sister playing the piano and singing. Music has always been a part of my life. Even though no one in my immediate or extended family played the drums, since I was a little girl drums always got my attention and interested me. I always loved rhythms and beats, the thread that brings all music together. It wasn’t until high school though, that I discovered how drums worked, when I attended a drum class at my school. I remember one of the first drummers I watched was Mike Portnoy. He was one the first artists who inspired me to play the drums. Watching his huge drum set and how effortlessly he could play such difficult songs, attracted me to the instrument immediately.

WiMN: How did your band Moskita Muerta become so popular in Chile? Can you share any memorable experiences while touring with this group?

VS: Moskita Muerta participated in the national TV-broadcast Battle of the Bands competition called Garage Music. After almost six months, many renowned Latin American artists and people from the industry voted Moskita Muerta, an all-girl band, winners of the competition. We went on tour with renowned Chilean artists and we received guest spots on television shows. We also had our songs played on popular radio. It definitely helped me gain experience in playing live, facing big stages and playing in front of huge crowds with excited fans, and deal with the nerves that come before that. I still vividly remember being on tour in the north of Chile, and realizing that I was playing along two of my favorite female artists, whom I had followed since I was a little girl, Nicole and Javiera Parra. It was crazy to have fans ask to take our pictures and sign autographs!

WiMN: What made you move to the U.S. to pursue music?

VS: The U.S. provides the best opportunities for aspiring artists, and I thought I should come and give it a try! The life of an artist is a challenging one, so I wanted to give myself the best chances. After months of networking and looking for opportunities, I feel like many doors have opened, I am very happy with what I have accomplished in the U.S. so far.

WiMN: How does your Chilean musicality come into play when you’re composing drum parts for American bands?

VS: In Chile, there is a mix of different influences from all over the world. You grow up listening to music from the U.S., Europe, Latin America, etc., and it opens your eyes and ears to different styles and cultures. Whenever I play with a band, I try to apply what I think fits best their style or genre, but what I always feel it’s there no matter what the style is, is my passion. Chileans are very passionate people.

VS: It was unbelievable! When I submitted my entry my main purpose was to get more exposure. There were so many talented drummers that participated, that any of us could have won! It is a great honor and I feel very humble to have been given this opportunity. It feels great, it really is like a dream come true.

VS: Since the beginning, it’s been a challenge to be in the industry, especially since the drums have been generally considered to be a ‘male’ instrument. Being a female drummer in Chile was not common at all, so I had to work hard to earn a spot, especially in the beginning. I remember when I was in high school, they would always ask all the male drummers first, if they could play in musicals, festivals, etc. If they were unavailable, they would ask me to play! I would think that it has been the case with many female musicians, not just female drummers.

I have a feeling that I’m not the only one who has struggled with this bias; although I feel like today it is more common to be a female drummer than it was 10 years ago. It does take hard work and consistency to succeed, but at the end if you are really putting all your effort and you’re good at it, doors or windows will open.

WiMN: Can you offer any tips or advice for women aspiring to enter the music business?

VS: There are many opportunities in today’s world. For example, by coming to the Women’s Summit, you are heading in the right direction! Take any good opportunity you have, work hard each day and enjoy what you do! At the end it is all about being happy and doing what you love, and by doing it, you will most likely be successful. And also, take advantage of technology to network, find opportunities, and put your work out there!

WiMN: What can we expect from your workshop at the Women’s Music Summit?

VS: In my workshop I’ll talk about some of my Latin influences, how Latin rhythms have influenced popular and rock music as well as my drumming, and I’ll give some practical tips for drummers to apply Latin concepts to their music. I’ll have some of the attendants participate and come play with me too! It’s going to be fun!