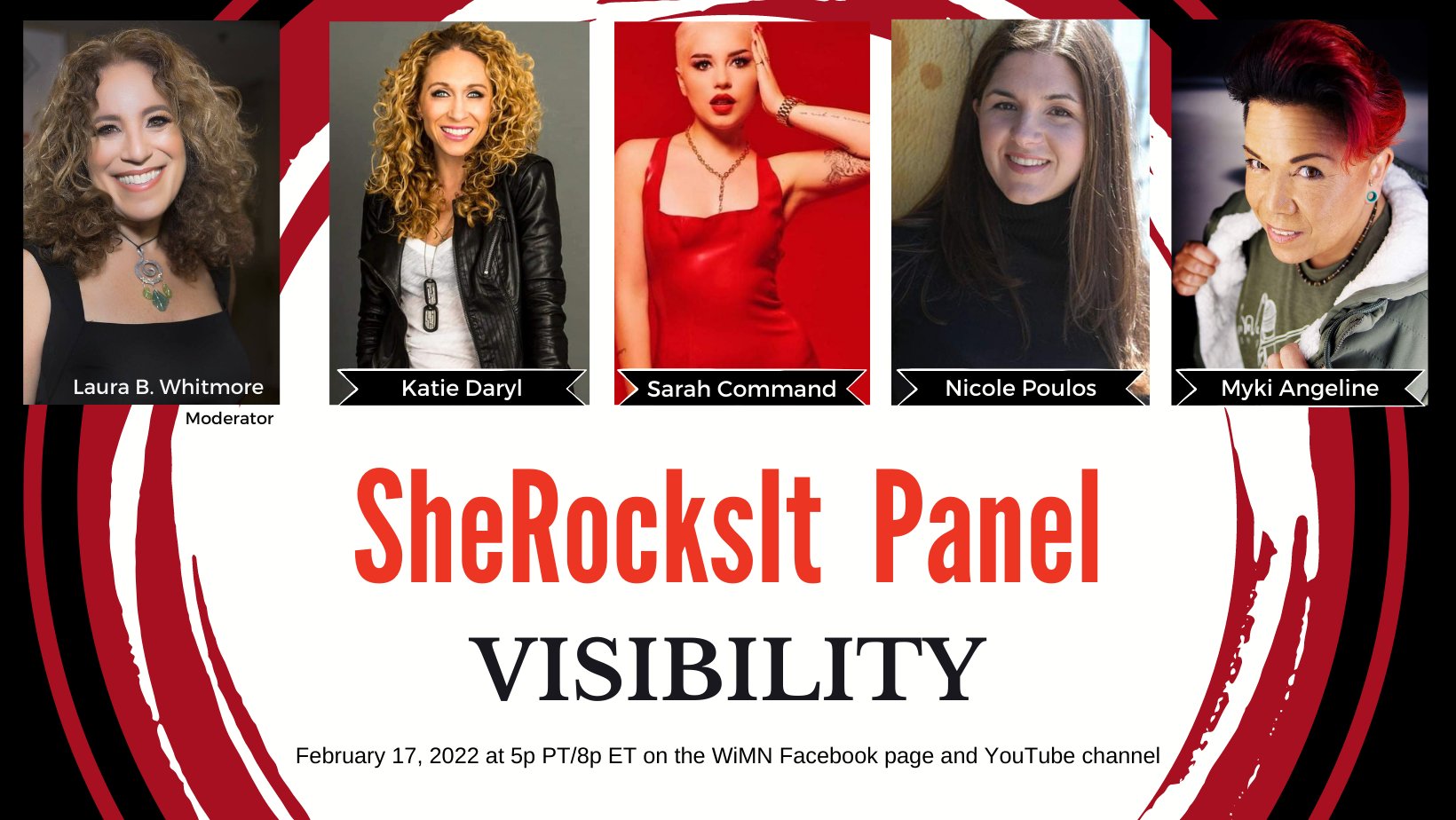 Join us for the next She Rocks It Women in Music Panel on Thursday, February 17, 2022 at 5pm PT/8pm ET. The discussion will stream live on the WiMN Facebook page and YouTube channel. RSVP HERE.
The theme for this discussion is: Visibility.
We will talk to seasoned music industry pros in media, publicity, radio and more as we discuss tips for getting visibility. In a crowded industry how do you take the next step to bring your music or brand to a bigger audience? Tap the brains of these brilliant pros to find out new ideas and ask questions.
MODERATOR: Laura B. Whitmore, WiMN Founder, She Rocks Awards Creator.
PANELISTS:

Laura B. Whitmore is a graduate of Hofstra University with a B.S. in Music Merchandising and an M.B.A. in Marketing. As the marketing manager for Korg USA for 20 years, she was instrumental in marketing, PR and artist relations for the Korg, Marshall, and VOX brands. She was also editor of Korg’s ProView Magazine. Prior to that, she worked in the Direct Marketing department of CBS Records. In 2008 Whitmore left Korg USA and founded Mad Sun Marketing, a boutique agency that specializes in marketing, PR, artist relations, event production, graphic design, and more for music and audio companies. Past and current clients of Mad Sun include Positive Grid, ArtistWorks, 108 Rock Star Guitars, Academic Superstore, Acoustic Amplification, Agile Partners, Breedlove Guitars, Colby Amplifiers, Dean Markley USA, Korg, KVRaudio, MusicFirst, Muse Research, NewBay Media, Notion Music, Peavey, SIR Entertainment Services, SIR Stage37, SoundTree, Sterling Audio, Take Me To The River, and more.

A singer-songwriter herself, Whitmore was the editor of Guitar World’s AcousticNation.com and the creator of the GuitarWorld.com featured blog series, Guitar Girl’d. She writes regularly for industry media outlets including Parade.com, Guitar World, Acoustic Guitar, MI Professional, In Tune and more. Whitmore has hosted and moderated many workshops and panels at events such as NAMM, Digital Hollywood, and SXSW on the topics of women in music, marketing, PR, apps and music making, songwriting, and more.

Katie Daryl is a host and producer with 15+ years of industry experience. She has lent her humorous and witty hosting style to MTV, VH1, TMZ, HDNet, CBS, REELZ, AXS TV and Anheuser Busch. Currently, Katie Daryl is currently the host & executive producer for The Top Ten Revealed, a humorous countdown music show on AXS TV.  Katie Daryl also hosts & produces a variety of AXS TV’s digital programs including Music High 5, At Home and Social, Rock & Tell, and Stranded. Weekly Katie Daryl finds herself interviewing the best of the best from the rock star world such as Nancy Wilson, Mick Fleetwood, Alice Cooper, Finneas, Jason Mraz, Lady A, Carnie Wilson and more! Daryl started her broadcasting career as a part time radio DJ at the age of 15. While attending Arizona State University (as a Scripps Scholar) she worked as a morning show producer for Clear Channel Radio in Phoenix. In 2000, after being crowned Fiesta Bowl Princess, Katie Daryl was hired by MTV to work as a reporter for Choose or Lose, covering the Presidential election and doing live updates on TRL. After the presidential race, Katie Daryl moved to Dallas to co-host a FM shock-jock radio program, which lead to her co-hosting The Mark Cuban Show for two seasons on UPN/CBS Dallas.

After pitching Mark Cuban, a music TV show concept, Daryl joined the HDNet team as host, producer and creator of True Music which aired weekly from 2002-2007. Concurrently, Daryl produced and hosted over 250 episodes of Deadline! for HDNet. Deadline! was a variety program featuring Katie Daryl attempting adventures like walking the hire wire and driving monster trucks.  She has also worked with VH1 as a contributing music expert on a variety of their countdown themed shows and she toured with Dale Earnhardt Jr. hosting Budweiser’s One Night Stand parties. In 2007 Katie Daryl helped with the launch of TMZ on TV as a producer & VO talent. She was responsible for daily radio call ins and live flash cam needs for national affiliates. Katie Daryl currently lives in West Hollywood with her husband and son.

Sarah Command – as one half of the Command Sisters – Sarah and her sister Charlotte wield the power to turn popular culture red, the colour being a signature feature of a finely crafted image. After playing together since childhood, the siblings honed on a distinct sound and style that has brought them to what you get today. Sarah drew on a lifelong love of shred gods, such as Joe Satriani, Steve Vai, and Orianthi, as Charlotte nodded to the songcraft of Sia and The Weeknd, cultivating a sharp signature sound steeped in mind-blowing musicality and tight hooks. Their sense of style got just as loud with a crimson take on high fashion. This careful presentation turned heads. Not only did they perform across the United States and Canada, but they attracted partners such as Martin Guitars, PRS Guitars, Marshall Amps, MAC Cosmetics, and Boss/Roland, to name a few. Additionally, they cultivated a fervent social media following through consistently eye-popping posts. Mind you, they impressively did all of this without one official release. Since inking a deal with 21 Entertainment, Universal Music Canada the duo has released a handful of catchy hit singles along with their debut EP Rouge.

Nicole Poulos is the founder and CEO of Sideways. Her passion for storytelling and the arts started at a very early age with her love of books, and lack of shame at being the first person on the dance floor at a wedding as a toddler. A life-long art appreciator, Nicole has pursued the arts her entire life, earning a Bachelor of Arts degree from Loyola Marymount. Realizing that she was a better art appreciator than an actual artist, Nicole pursued a career in entertainment, landing at the Welk Music Group (Vanguard and Sugar Hill Records) in the “New Media” department a few short months prior to the label group signing their iTunes contract. From there she has had a wild ride at the forefront of figuring out how music and the internet could work together in harmony. Nicole started Sideways over 10 years ago to champion creatives, brands, business and individuals, helping them tell their stories and navigate the ever-changing information landscape.

MXL Microphones Artist Myki Angeline is a Broadcaster for Audacy, Inc. at 98 Rock in Sacramento, California USA. She is the creator of The Bad Filipino podcast and blog (on Medium.com) who enjoys volunteering her time for the Stairway To Stardom program, and Girls Rock Sacramento Music Camp. As the Media Content Manager for the Women’s International Music Network, Myki Angeline has interviewed some of the largest, influential, pioneers in the music industry. She is also an ambassador for Keona’s Self Defense Products for women.