Front and Center: Bassist for World Organization of the Righteous Movement, Karen Righeimer

Karen Righeimer is the bass player of Chicago-based band World Organization of the Righteous Movement (W.O.R.M.). They are an industrial band reminiscent of Nine Inch Nails and Ministry, with a touch of Thrill Kill Kult thrown into the mix. 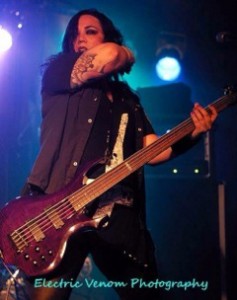 The Chicago native is rock superstar by night, and HR coordinator by day. Righeimer has been playing with W.O.R.M. for the past seven years, and prior was with Now I’m Nothing, Illinois 7, and Mindfluxfuneral.

Check out the band’s Facebook page and ReverbNation to learn more.

WiMN: When did you begin learning bass guitar, and was it always your instrument of choice?

KR: I actually started playing music at an early age. I convinced my parents to enroll me in guitar lessons when I was 6 or 7, but I didn’t stick with it. In 4th grade, my school invited students to look at different instruments, and I was drawn toward the cello. I played from grade school through college, and recently have begun performing cello live again.

In high school and college, I became heavily involved in performing. I was part of the orchestra, choir, theatre, and musical theatre. I picked up the bass full-time in 1997. I don’t know why I did, honestly. I think I remembered that I hated guitar, I was pretty okay at playing cello (and did a little bit of upright bass in school), and I wanted to be in a band.

I bought a horrible black and white Fender P bass and started to teach myself, mostly by ear – it was kind of love at first pluck. I’ve never looked back or regretted choosing bass.

WiMN: Describe the moment you first realized that you had to play music.

KR: I think I’ve always wanted to be on stage in some capacity. Even in grade school I was in school plays or choir. But it was 1997 when I realized I wanted to play rock and roll.

I was working at a record store, and David Bowie’s album Earthling came out… I became obsessed with it. I started grabbing everything I could that had to do with Bowie, and fell madly in love with glam rock. I wanted to play on stage and wear elaborate costumes, and play outrageous instruments.

WiMN: Who is your top musical role model and why?

KR: David Bowie. I will never stop being inspired by him. He has successfully been able to stand the test of time with music. I don’t think there has ever been a musician that has or will come close to his talent and adaptability.

WiMN: Throughout your career, have there been any specific moments and experiences that other female artists can relate to?

KR: When I decided to be in music, I was in metal bands, punk bands… bands that usually did not have female musicians in them. There were only a small handful of us (female metal musicians) in Chicago.

I took on a mantra of “be louder, work harder, out-drink, out-fight, and out-play all the guys.” It took many years to be taken seriously, and in a lot of cases I’m still not taken seriously. I think that this is still a big problem – a lot of female musicians aren’t taken seriously.

I still get people coming up to me and going, “you’re in a band? You’re the singer right?” There was this one time where I showed up to the venue for load-in and the promoter looked at me and said, “girlfriends of band members don’t get in for free.”

What any aspiring woman musician or any current woman musician needs to do is OWN IT. Be confident in what you do, and be good at it. Don’t rely on flaunting your physical attributes to get the job done. Know your gear, do your homework, take lessons, and ask for advice from your peers. No one is going to take you seriously if you show up on stage with no clue how to play an instrument and your ass hanging out.

In order for female musicians to get rid of the challenges we face, we have to change ourselves. I always tell people that I’m not a female musician, I’m a musician. We don’t distinguish with other things, why this? I have tons of female friends who are photographers, they don’t go around saying they are FEMALE photographers. Let’s just all be awesome musicians together.

About contributing author Dawn Perreault: Dawn Perreault is co-founder, along with Erik Vecchione, of the Chicago-based, non-profit webzine, Rock in Chicago. It was created to help gain exposure for local original bands and create a stronger sense of unity in the local music community. She is also lead singer and songwriter of the Psycho Sister band.