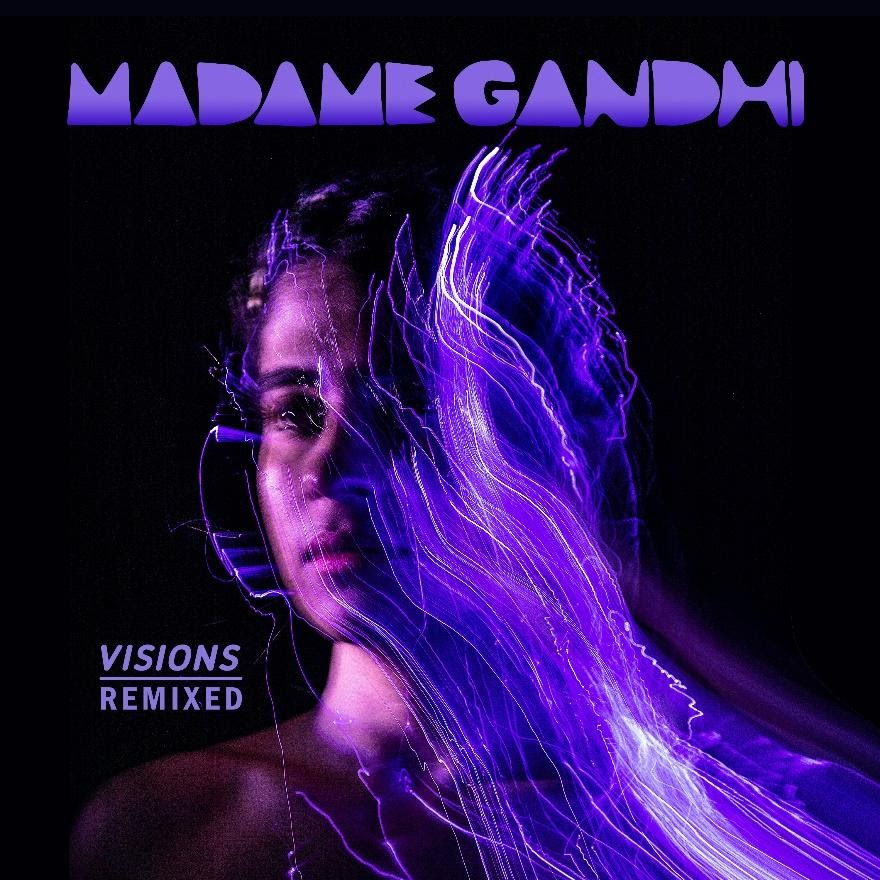 MADAME GANDHI releases Visions Remixed, a globally-sourced collection of remixes for the five tracks encompassing her 2019 critically-acclaimed Visions EP.  Each of Madame Gandhi’s original tracks from her latest EP have been completely reimagined by a diverse group of female producers. With help from Riobamba, Drik Barbosa & MC Sofia, Sarah Farina, Arusha Jain and Jeia, Visions Remixed covers a wide spectrum of dance music across the globe, imbuing the EP with everything from Moombahton to UK garage, from Afrobeat and Baile funk to techno.  Percussive, warm and upbeat, the resulting EP repurposes Madame Gandhi’s original sound to create a distinct collection for dance or fitness communities and beyond – listen here.

Of Visions Remixed, MADAME GANDHI says, “Only 2% of the world’s music producers identify as female, which means that an even smaller percentage identifies as gender non-confirming or trans. For that reason, we have to be intentional about creating visibility for ourselves, and putting each other on whenever we have the chance. I asked some of my favorite producers and MCs to each pick a song off of my album Visions and come up with a remix for it. Each artist did an incredible job, and what resulted was a global dance album of Visions reimagined, a gift during a time where I believe all of us could use a bit of a positive pick me up.”

Selected as 2020 TED Fellow for her commitment to creating meaningful and positive change, Madame Gandhi also debuts her most recent TED Talk entitled “Stop Dancing To The Sound Of Your Oppression” today – watch here. The discussion takes place as part of TED2020 Uncharted, with Madame Gandhi joining multidisciplinary individuals across the globe for an online gathering of conversations, sessions and performances. She returns to the TED Stage after her 2018 talk about the importance of making music with a message accessible, which now has over 200k views.

The release follows the June debut of Madame Gandhi’s official video for “Waiting For Me,” which garnered extensive buzz for its powerful and imaginative storytelling.  Madame Gandhi also made her NPR Tiny Desk (Home) Concert debut this summer, performing tracks from both her Visions and Voices EPs – watch here.  With an imitable pairing of complex percussive rhythms and empowering messages of liberation, Madame Gandhi is known for her passionately uplifting body of musical work that continues to elevate the female voice and redefine notions of gender, identity and politics.  Having released her first two EPs as part of an overarching short-form album trilogy, most recently 2019’s Visions, Madame Gandhi begins her new partnership with Sony Music Masterworks ahead of the third and final installment in the series.

1. WAITING FOR ME (RIOBAMBA REMIX)

The Riobamba remix of “Waiting For Me” takes on a Moombahton feel with accents of Indian percussion. This electric, reggaeton dance mashup doubles as a protest anthem, calling for the disruption of institutionalized power structures and the embrace of new narratives of self-expression. Riobamba explains, “My intention with the remix was to give it a peak time club feeling while leaving plenty of space for the original recording’s message to shine through– a soundtrack for liberation rooted in collaboration, abundance, and an intersectional vision of revolution.” Learn more about Riobamba at http://riobamba-dj.net/.

The Drik Barbosa & MC Soffia remix of “Top Knot Turn Up” overlays anthemic, Portuguese verses with its inventive rhythm, kicks and its punches. Featuring verses from Drik Barbosa, a São Paulo-born rapper recognized for her songs celebrating gender liberation, and MC Soffia, a 15 year old powerhouse who considers rap to be “music of strength and resistance.” MC Soffia believes that “when a girl accepts and celebrates herself…that’s [her] real weapon of protest.” This trap beat will make you feel empowered, even if you don’t speak a lick of Portuguese. Learn more about Dirk Barbosa at http://drikbarbosa.com/ and MC Soffia at https://www.facebook.com/mcsoffia/about/?ref=page_internal.

3. SEE ME THRU (SARAH FARINA REMIX)

The Sarah Farina remix of “See Me Thru” recontextualizes Gandhi’s original vibey RnB song into the future bass style of the Berlin-based DJ/ Producer. Her ability to seamlessly blend futuristic and UK funky beats in a way that will make you want to move is what she is best known for. Pair this with the message of “See Me Thru” for a sense of freedom as the sounds and textures bring you an overwhelming feeling of peace. Sarah Farina explains, “I wanted to create something that felt like a musical virtual hug that fills you up with positivity.” Learn more about Sarah Farina at http://www.sarahfarina.net/.

The Arushi Jain remix of “Young Indian” is a techno remix of Gandhi’s original psych rock hip-hop tune. Arushi Jain’s beats and her unmatched skills as a synthesist are surreal and could almost be described as cinematic as we feel like we are embarking on a journey through her music. Arushi Jain explains, “For this remix, I deviated from my personal comfort of ambient music, to a faster club based approach to songwriting. It was an exciting challenge to produce something so different from my original sound, and I realized that all the tools used to create it still felt very natural and in some ways unique to me…my goal was to create really raw and slightly harsh patches to underline the overall authoritative tone of the track, and claim the space it deserves.” Learn more about Arushi Jain at http://www.modularprincess.com/.

The Jeia remix of “Bad Habits” takes on the producer’s signature big drums on top of an afrobeat rhythm, with vocal production that is warm and uplifting for the soul. Madame Gandhi’s message is emphasized by the big beats, rich percussion, and complex layering. Jeia explained, “One thing that caught me the most about Kiran and her music is that we have very similar backgrounds. I was born and raised in Indonesia; and we have such diverse traditional music and culture. I think that’s also why I’m drawn to world music, especially world percussion. What Kiran brings to her persona and her music is something that I really resonate with.” Learn more about Jeia at http://facebook.com/thisisjeia.

Kiran Gandhi, who performs as Madame Gandhi, is an artist and activist whose mission is to elevate and celebrate gender liberation. She has toured as the drummer for M.I.A, Thievery Corporation and most recently Oprah on her 2020 Vision Stadium Tour. Gandhi holds a Bachelor’s Degree in Mathematics and Gender Studies from Georgetown and an MBA from Harvard. In 2015, she ran the London Marathon bleeding freely to combat period stigma around the world, sparking a global viral conversation about how we treat menstruation in various cultures. She has been listed as a Forbes 30 Under 30 member and is a 2020 TED Fellow. Her mathy percussion, uplifting music and inspiring talks have been critically acclaimed. Her song “The Future is Female” reached #8 on the Spotify Viral US Charts following the 2017 Women’s March. She has released two short-form albums, Voices (2016) and Visions (2019), accompanied by a series of music videos produced and concepted by women and gender non-conforming creatives. Gandhi is currently working on her third short-form album Vibrations. For updates and more, visit www.madamegandhi.com. 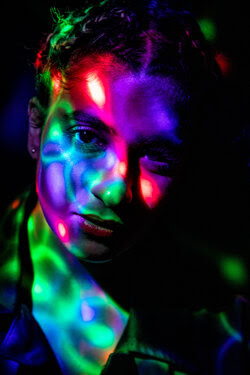