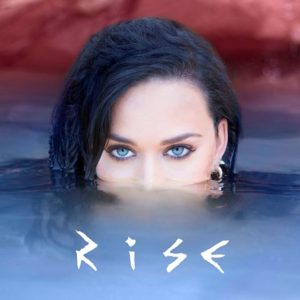 Katy Perry – best known for her iconic pop songs “Firework,” “Roar,” and “I Kissed A Girl” – has hit the ground running with “Rise,” her first new song in three years and the theme for NBC’s broadcast of the 2016 Summer Olympics in Rio.

The song was a long time coming according to Perry. “I was inspired to finish it now, rather than save it for my next album, because now more than ever, there is a need for our world to unite,” she shared. “Rise,” produced by Max Martin, features lyrics of passion and strength – “Oh, ye of so little faith/Don’t doubt it/Victory is in your veins/You know it/And you will not negotiate/Just fight it/And be transformed,” Perry sings.

“I know that together we can rise above the fear – in our country, and around the world. I can’t think of a better example than the Olympic athletes, as they gather in Rio with their strength and fearlessness, to remind us how we ALL can come together, with the resolve to be the best we can be. I hope this song can inspire us to heal, unite, and rise together. I am honored that NBC Olympics has chosen to use it as an anthem before and during the Rio Games,” Perry said in an official statement.

The single will be utilized by NBC Olympics production team throughout the event, including during coverage of the August 5 opening ceremony, as reported by Billboard. “Rise” is available now through iTunes and Apple Music.

The video for “Rise” includes a riveting montage of memorable moments and athletes from Olympic games of the past. Watch it below!