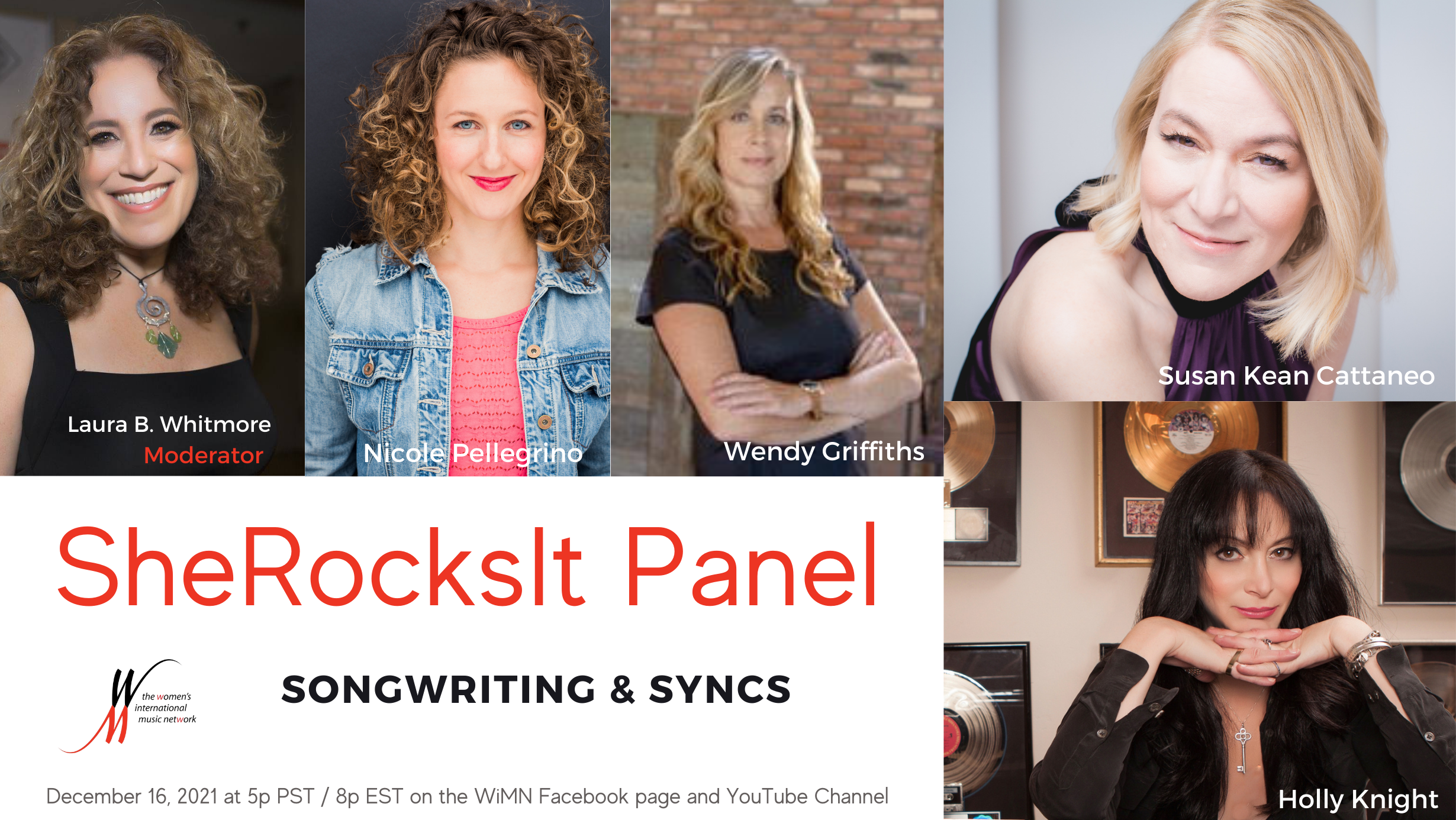 Join us for another exciting live panel discussion! Our SheRocksIt Panels go in depth with women in the music industry to talk about their careers, challenges and opportunities they see happening now.

For this panel on December 16, 2021 we’re focusing on songwriting and sync, how the industry has changed, where opportunities are, what can aspiring musicians do to tap in, and more.

Moderator: Laura B. Whitmore – WiMN Founder, creator of the She Rocks Awards

Learn more about our amazing panelists below!

Nicole Pellegrino is Senior Creative Director at BMG Production Music. An industry professional for 10+ years, she has worked across all media to sync, produce, and compose music. Currently, she heads the BMGPM Creative Team, develops the PM catalog, manages brand and client partnerships, and explores new roads for BMGPM. She is a percussionist and performer. When she’s not hustling on behalf of composers, she is most often dancing with her 2-year old and all her Moana figurines.

Susan Cattaneo is one of Boston’s most respected songwriters. A powerful singer and sophisticated writer, Susan blends rock, folk and blues with a hint of country. Call it New England Americana with a twang.  She is a three-time Kerrville New Folk Finalist (2015, 2018, 2015) and a three-time nominee for Best Americana Artist at the Boston Music Awards (2020, 2019, 2018). Susan was a finalist at the Wildflower Music Festival, and she won the CT folk Festival in 2018. Her latest album The Hammer and The Heart charted #1 on the Billboard Heatseekers chart and yielded a #1 song on folk radio and a top 10 album of 2017.  Susan also taught Songwriting at the Berklee College of Music for over 20 years. She has opened for or shared the stage with Bill Kirchen, Mark Erelli, Ellis Paul, Jon Cleary, David Wilcox, Rose Cousins, The Nitty Gritty Dirt Band, Paula Cole, Huey Lewis and The News, Amy Grant and The Pousette-Dart Band.

Wendy Griffiths is an accomplished senior level executive with 35+ years of experience in music, synch and video marketing. Wendy worked with the likes of Green Day, Alanis Morissette, Metallica, MUSE, Michael Buble, and Linkin Park during her 25-year tenure at WB Records in Video Promotion & Production, later transitioning into Sync. During her four-year run at BMG Rights Management, she oversaw a 30-person Licensing & Marketing staff representing the catalogs of Johnny Cash, Kurt Cobain, Wilco, Muddy Waters, Bruno Mars, My Morning Jacket, St. Vincent, etc… while working closely with the Global Affiliates. During her tenure there, she grew Synchronization revenue by over 30%, creating a cohesive powerhouse department. After BMG, Wendy spent two years at Position Music overseeing the Marketing & Sales Dept-again seeing major growth in synchronization and bringing fresh artist talent to the company. In January of 2019, she ventured out on her own and set up TRULY MUSIC, an independent Synchronization & Marketing company specializing in connecting artists with licensing opportunities across all media platforms. Truly Music represents a wide range of artists and writers from Skylar Grey, John Mayer to Classic Vintage catalogs dating back to the 1940’s. Wendy has two daughters attending college and still loves to see live music after all these years when she’s not gardening or growing her backyard bird aviary!