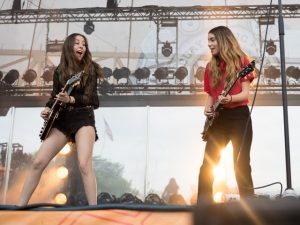 Cincinnati’s riverside Bunbury Festival was quite the explosion on Sunday, June 5th, for the perfect acts. Artists such as the Killers, Florence + the Machine, Ice Cube, deadmau5, X Ambassadors, Tom Petty’s Mudcrutch, Charles Bradly & his Extraodinaires, Haim Sisters, Elle King and many more all performed there. They performed classic hits from old school rap to rock.

However, the favorite part of the event was when the SoCal sisters Este, Danielle and Alana Haim sang “I Would Die 4 U” by Prince in honoring his legendary work. “The siblings did a bit of Kiss-style side-to-side guitar swing during the song’s finale, before kicking into the greasy of ‘My Song 5’, which itself felt like a bit of an homage to the Purple One as well” Billboard pointed out.

Even though the Killers did an outstanding job being the headliners of the act, it was nothing compared to the Haim sisters tribute to Prince. The crowd raged for the songs that were performed, alongside with performances such as Elle King and many other women.

Though the event did not have as many artists this year compared to last year, it turned out to be a full house. Over all it was equipped with great women artists with supporting men who had the lead in kicking off the event.