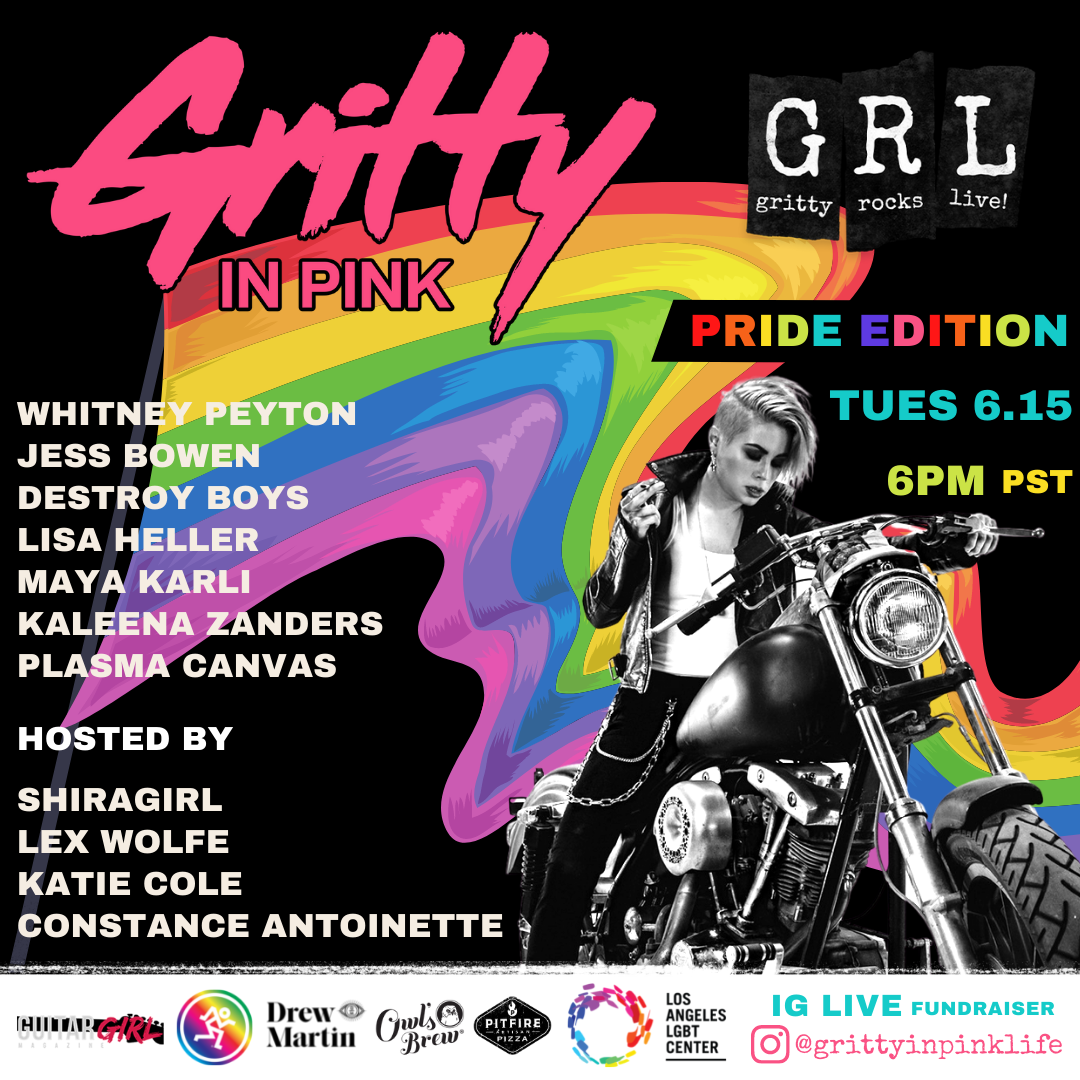 Gritty In Pink is partnering with the LA LGBT Center in honor of Pride Month with an Instagram livestream fundraiser on Tuesday, June 15 at 6:00pm PST/ 9:00pm EST on @grittyinpinklife.

It will be dedicated to raising awareness and funds for the center. Gritty In Pink continues their mission of highlighting female-identifying and non-binary musical voices, and calls to action for important social issues. The show follows after Gritty in Pink’s two-part Mental Health IG live series, which were their most successful shows yet with over 3,400 live viewers. This month’s livestream will be generously sponsored by Mackie, and as well as supporting partners Guitar Girl Magazine, Owl’s Brew, Pitfire Pizza, Boozy Tea and Drew Martin.

The LA LGBT Center’s mission is to fight the good fight against bigotry and harsh realities facing the LA LGBTQ+ community. It provides programs, services, and strives for advocacy that focuses on health, education, social, housing, culture and leadership. Employing over 800 members that help provide services for the LA LGBTQ+ community, it is one of the largest LGBTQ+ focused organizations in the world.

Kicking off Pride month, Gritty In Pink announced queer artist Whitney Peyton as their Bandmate of the Month cover star for June, in honor of Pride season. Peyton is a rapper, songwriter and singer from Philadelphia, Pennsylvania. In the June issue, Peyton discusses the challenges she has faced as a woman and LGBTQ+ artist within the music industry. “I would say being a woman in music has presented me with more challenges than being LGBTQ. Anytime you achieve anything there will always be people who try to downplay your accomplishments by assuming you must have slept with someone to get there.” With her own new label Alpha Howse and hot new single “Give It Gas,” she will be joining the livestream with a live performance.

Shira Yevin, singer of Shiragirl and Gritty In Pink founder, says: “We are unbelievably proud to partner with such a pivotal organization as the LA LGBT Center. With so many Gritty artists identifying as queer and based in the Los Angeles area, there could not be a more relevant and supportive charity partner for our Pride show!”

Those in the LA area should also mark calendars for Gritty In Pink’s first live post-pandemic show, a pop-up at Pitfire Pizza NoHo on July 8. From livestreams to live music, Gritty In Pink is ready for summer 2021!

Gritty in Pink is a new platform empowering women in music through performance, partnerships and networking opportunities. Founder Shira Yevin has a legendary history of breaking down barriers and carving out a space for women, as the creator of the Vans Warped Tour Shiragirl Stage, which featured 300+ female musicians, including Joan Jett and Paramore. Gritty in Pink continues the legacy of providing community and a stage for female voices in a male-dominated industry, having showcased 175+ artists with a collective IG following of over 3 Million.

Since 1969 the Los Angeles LGBT Center has cared for, championed, and celebrated LGBT individuals and families in Los Angeles and beyond. A world in which LGBT people thrive as healthy, equal, and complete members of society. Learn more at lalgbtcenter.org.