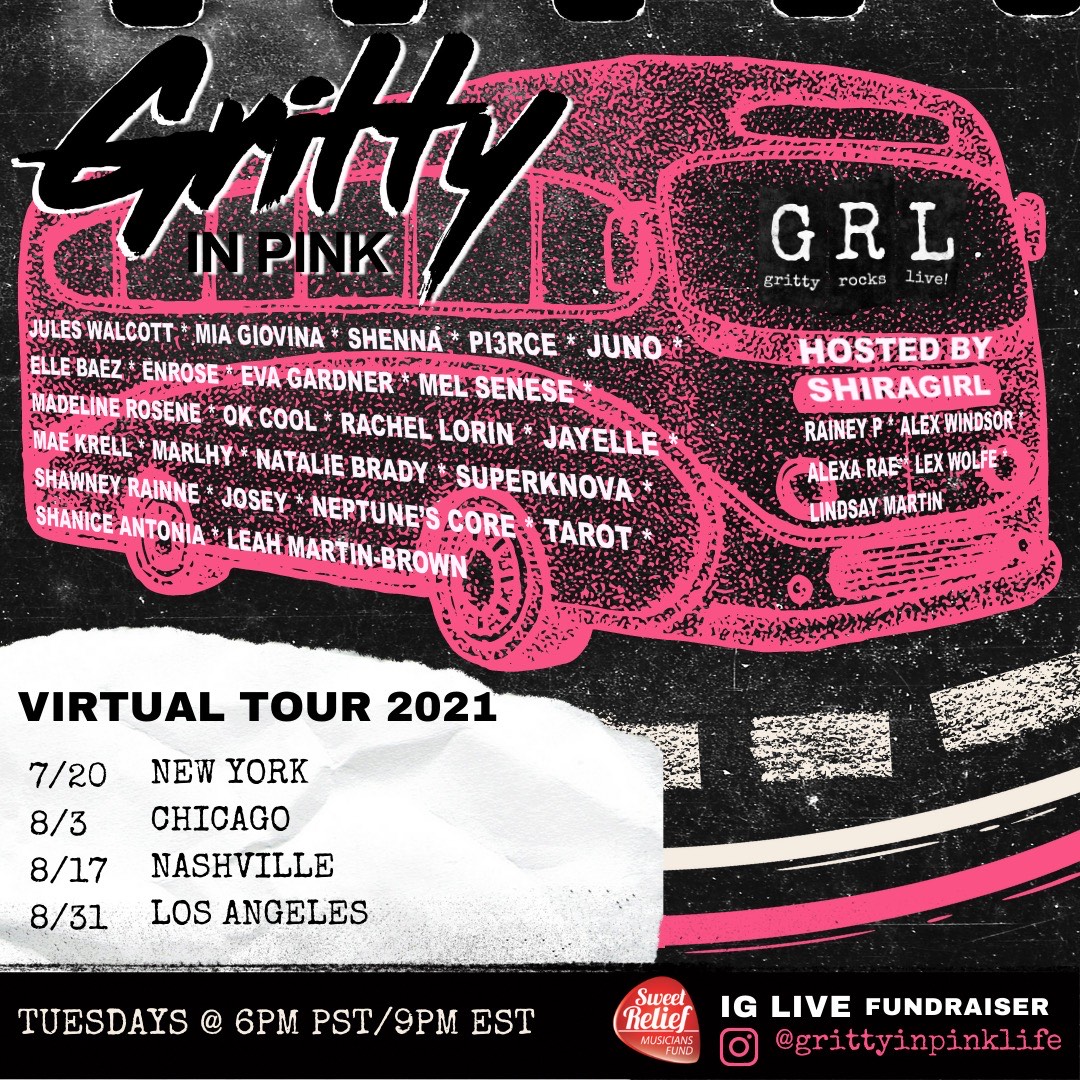 Gritty In Pink is set to kick off their second edition of their Gritty Rocks Live (GRL) Tour this summer, highlighting artists in New York, Nashville, Chicago and Los Angeles. Fresh off the success of their LA return to the live stage after 16 months, Gritty In Pink is shifting gears and heading back on the (virtual) road for summer 2021! Their first stop will be in the city that never sleeps, NYC on July 20, with performances starting at 6PM PT/9PM ET via Gritty In Pink’s Instagram (@grittyinpinklife).

Founder Shira of Shiragirl says, “We are thrilled to continue the virtual tour, even as in person shows resume. Last summer, we enjoyed being able to grow our community across the country, and we all know Instagram live is still a popular platform to connect across time zones!” The show has successfully maintained a biweekly series, averaging 1500 live viewers, and raising thousands of dollars for various charities. The New York show’s line-up featured rising Tik-Tok starlet Jules Walcott, singer-songwriter and model Elle Baez, vibrant pop-star Shenna, saxophone-playing Gabi Rose (Enrose), singer/guitarist Mae Krell and New Jersey native singer/songwriter Mia Giovina.

The rest of the tour will feature notable artists such as the storytelling-guitarist Juno, alternative-singer/drummer Marlhy, dark pop enchanter Pi3rce, alt-pop superstar Jayelle, soulful songstress Josey, with countless other amazing female artists and viewers can also expect special guests to make appearances during the shows as well. The tour will be hosted by none other than the Gritty legend Shiragirl with co-hosts/house musicians Rainey P, Lex Wolfe and Alex Nicole Windsor. This tour will be supported by ongoing sponsors Mackie, Owl’s Brew, Guitar Girl Magazine, and benefit charity partner Sweet Relief Musicians Fund.

The Sweet Relief Musicians Fund is an organization that provides financial assistance to musicians and music industry professionals, who are struggling to make ends meet while facing illness, disability, or age-related problems. This will be Gritty In Pink’s second virtual tour, after last year’s successful excursion that had a diverse lineup of female and non-binary artists performing in eight major US cities. Gritty In Pink is pleased to give a platform to female artists beyond LA, and continue to grow their Gritty community across the nation!

For more updates on Gritty In Pink’s summer 2021 US virtual tour, visit their Instagram for special announcements on future show line-ups and when they will be coming to a virtual city near you!

Gritty In Pink is a new platform empowering women in music through performance, partnerships, and networking opportunities. Founder Shira Yevin has a legendary history of breaking down barriers and carving out a space for women, as the creator of the Vans Warped Tour Shiragirl Stage, which featured 300+ female musicians, including Joan Jett and Paramore. Gritty In Pink continues the legacy of providing community and a stage for female voices in a male-dominated industry, having showcased 175+ artists with a collective following of 4 million on Instagram and 7 million on TikTok.

In 1994 Sweet Relief Musicians Fund was incorporated as a 501C3 nonprofit charity and has since been offering vital assistance to professional musical artists in need. Many prominent musicians, professionals and music fans have contributed enthusiastically to Sweet Relief. Benefits have been performed in venues from Miami to Seattle, with performances donated by many established and emerging artists. Nightclubs, concert halls, radio stations, record labels, restaurants, clothing and shoe companies, music retailers, athletes, actors, corporations, foundations and music fans have all participated with Sweet Relief to assist struggling musicians.