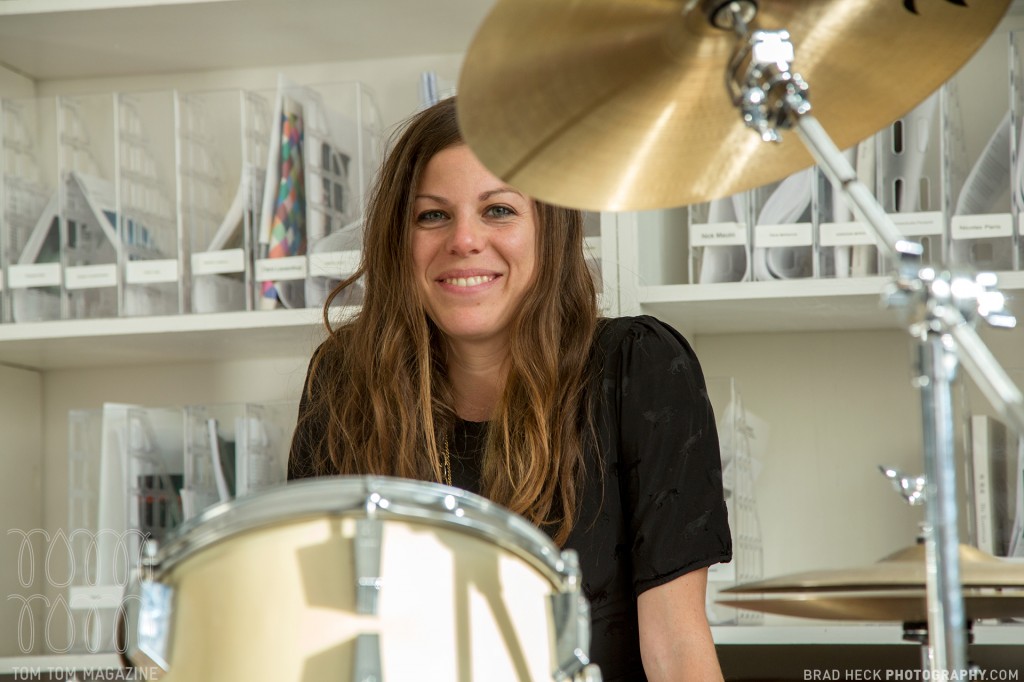 Mindy Abovitz started out on piano and bass in her younger years, but it wasn’t until discovering the drums in college that she found her true musical calling. After playing in a number of bands and realizing how poorly female drummers are represented in the industry, Abovitz was inspired to create a voice for these musicians.

She founded Tom Tom Magazine; the only magazine in the world dedicated to female drummers. Tom Tom seeks to raise awareness about female percussionists internationally and hopes to inspire women and girls of all ages to drum, all while strengthening and building the community of otherwise fragmented female musicians.

Today, after 24 issues, Tom Tom has become more than just a magazine, but a movement for female drummers around the world.

Find out more at tomtommag.com.

WiMN: What was your introduction to music, and what attracted you to drums?

MA: I started playing drums in college. I gravitated towards them in a completely unconscious and visceral way. My intro to music was through piano lessons as a kid and then being given a bass guitar by my older brother when I was 15.

WiMN: What led to the creation of Tom Tom Magazine?

MA: The ingredients involved in the lead up to Tom Tom was equal parts feminism, being a drummer, working in media, volunteering at Rock Camp for Girls and working in the male dominated music industry for some years. The goal of the magazine is to increase awareness of existing female drummers and to encourage girls and women everywhere to play.

WiMN: Tell us about the Hit Like a Girl Contest. How did this come about?

MA: Hit Like a Girl is a joint venture between Tom Tom Magazine, DRUM! magazine and TRX Cymbals. Dave (TRX) called Phil Hood (DRUM!) and myself on the phone one day and asked if we would run a contest for female drummers with him. We said yes and the rest is history.

WiMN: You’ve worked with Rock Camp For Girls and Vibe SongMakers – can you tell us about your experiences there?

MA: Both of those organizations are non-profits that empower girls through music. It was through those programs that I connected with other professional and confident women musicians who, along with me, modeled an equal music playground for the girls. Both of the experiences were essential in building my confidence in myself as a musician and as a leader. 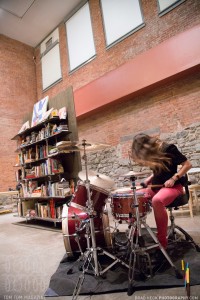 WiMN: Tell us about your drumming these days – what projects are you currently working on?

MA: I perform in larger museum pieces or projects that I put together with other women drummers. They are usually experimental and comment on the larger ideas I bring to print in the magazine. The last performance I drummed in took place in the Perez Art Museum in Miami. There were 15 women drummers in total preforming throughout the museum.

WiMN: Who are some of your heroes – musicians or otherwise?

MA: My heroes include my parents, my brothers, Karla Schickele (Willie Mae Rock Camp for Girls), Laura Taylor (Guitar Center), Susie Ibarra, Kiran Gandhi, Kathleen Hanna, Beyonce, everyone I work with at Tom Tom and pretty much all the drummers we cover in the mag.

WiMN: Can you share your experience as a woman in the industry? What kind of challenges have you faced?

MA: I have had a million and one challenges. The #1 challenge is the confidence to be in the industry. You don’t see many women around you and that never feels comfortable.

Other challenges include being in the industry as a woman and representing women. That is sometimes considered to be passe, uncool or overdone. Lastly, being a powerful woman can be seen as a negative thing. In general, women and girls are taught contradictory things their whole lives and I am prey to those traps.

WiMN: What is some advice you’d offer to a young woman pursuing a career as a drummer?

MA: My advice is to do it. And once you are drumming, drum with confidence and call yourself a drummer as soon as possible.

MA: More of the same great magazine. Wider distribution as we branch out the to UK and Europe. A continued dedication to producing good media. The magazine on Virgin Atlantic airlines and grander gestures to move and shake the industry.

MA: I am looking forward to being in the company of incredible women and men who are all dedicated to further opening the industry to women. I am also honored to have been invited and a bit nervous about getting up in front of everyone!!