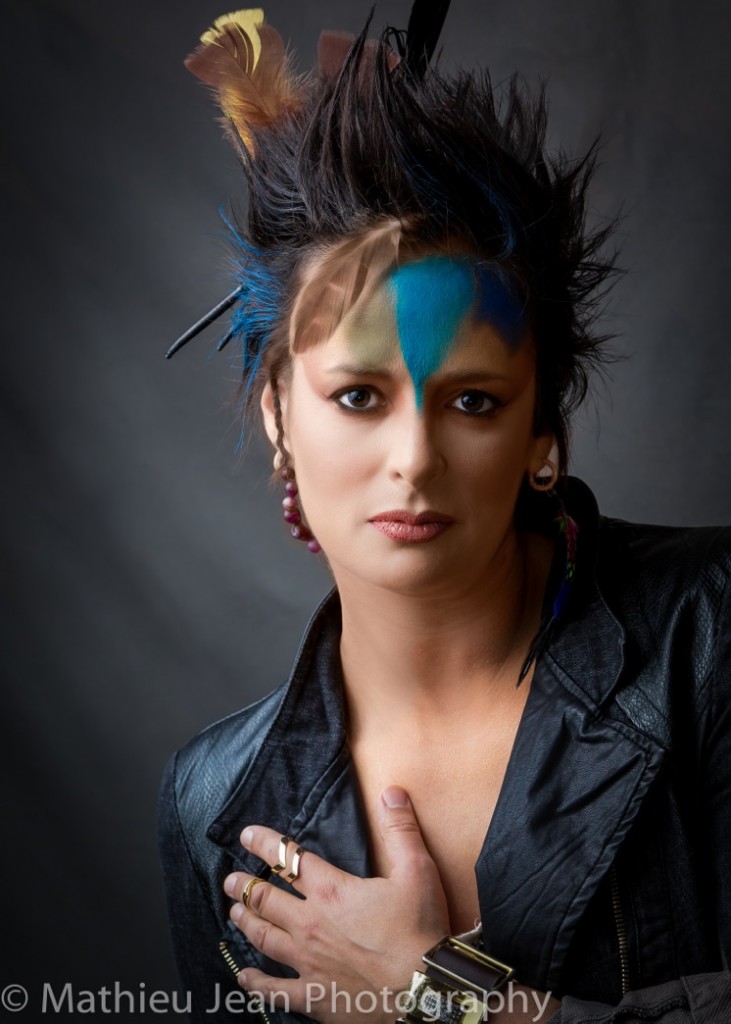 Jen Lowe doesn’t have a concise elevator spiel down and prefers to simply say she works in the music industry – that’s just because she’s good at so many things!

A multi-instrumentalist, Jen Lowe discovered drums and percussion at 13. Nowadays you may find her pounding ferociously on a djembe or gently finger-picking her old guitar. She’s an internationally touring musician, an entrepreneur, a marketer, and the Founder of BoomBoom Percussion, a website that aims to bring together percussionists and answer all questions related to percussion.

If you don’t see her on stage or at an executive meeting devising the next biggest thing in the music products industry, you will surely find her playing golf, as that’s her favorite thing to do when she’s not playing music.

To learn more about Jen, her band and her business, visit http://jenlowe.com/.

WiMN: What came first, songwriting or percussion? How?

JL: I have been playing drums and percussion since I was 13 years old and really defined my role as a musician when I joined and marched drum corps for four years.  I did not start playing guitar and singing until about six years ago. I had all these song ideas that I just had to get out of my head and out into the world.

WiMN: You’ve got a successful career as a musician and online entrepreneur. You’ve also worked extensively in the musical instruments industry. Tell us about that.

JL: I love playing and performing live, but I am also really passionate about the business side of things. There are a lot of artists out there who are leading similar lives. I have found that all of my passions sort of feed each other, and at the end of the day they seem to find a way to connect back to each other as well.

I have had the fortunate experience of working with some of the smartest people in the industry. While I have done the marketing for Friedman, Kannenberg & Co. (music industry accountants and consultants), I have learned so much from them on the business side of the music products industry. The knowledge I have attained from spreading out and going outside my comfort zones has proved to be invaluable.  I find it amazing and rewarding to be able to engage in meaningful conversations on so many different levels of the music industry. The only difficulty comes when I am asked what I do for a living. It is really hard to define in one small elevator speech. With that in mind, I just say that I am in the music industry.

WiMN: You are the founder of BoomBoom Percussion. How can percussionists benefit from your site?

JL: I started BoomBoom Percussion because there were so many people who had a sincere curiosity about the instruments I was playing. Coupled with the fact that I consistently had people coming up to me after shows saying “I wish I could do that,” or “I wish I had learned to play an instrument,” and “I really want to play the drums.” I would always try to encourage those people to buy a drum and jump in, so in turn I started BoomBoom with the idea of “yes you can.”

I wanted to build a super friendly, encouraging, informational space that anyone could go to and get an instrument. I was tired of going to music stores that felt like it was not only a good ole’ boys club, but also a place for those who already knew what they were doing. Buying an instrument for the first time can be really intimidating, and I really wanted to take the intimidation factor out of the buying process. BoomBoom offers an environment where you can get started, where you can ask anything you want, and where we want you to just play music. You don’t have to be a pro. You don’t have to be an educator. You can get any instrument and play it for the sheer joy of doing so.

With this in mind, I have sold a lot of instruments to people who just needed a little love and support – people like lawyers and doctors and executives who just wanted to be able to play an instrument.

WiMN: Jen Lowe and The Sensitive Dudes! You have to tell us how the name of your band originated.

JL: Jen Lowe and the Sensitive Dudes – haha – I love my dudes. I was playing a show in Atlanta at a concert series called “Unplugged In The Park,” and we had just finished playing one of my sadder songs. I turned to my friend Jim Hodgson and remarked on the microphone how very sensitive he was on that tune. Without hesitation, the next thing to pop out of my mouth was, aha, we are Jen Lowe and the Sensitive Dudes.  I guess it was sticky, because I have rolled with that ever since.

I am really fortunate to get to play with some of the sweetest, most talented guys out there. In fact, this last winter we put on a show called Jen Lowe and the Super Sensitive Dude-A-Palooza. I had 16 guys on that show. It was a blast!

WiMN: More on your band. What type of music do you play and where can people expect to see you playing?

JL: My music is Americana in style; it’s a cross between country and pop. I like to try and tell my story, or the story that I am feeling at the time through my writing. I want the listener to be able to go on the journey with me but also be able to fill in the blanks with their own truth. I feel like songwriting is just another way for me to connect to people, and I am really passionate about connecting.

My latest record is called Americanica because we did a mash up of Americana and electronic music on some of the songs. Tim Acres produced both of my records, and I want to co-write the next one with him. I tour all over the place playing anything from coffee houses to theater style venues.

WiMN: Let’s get personal. Tell us about a negative experience you’ve had in your career related to being a woman. How did you overcome it?

JL: I guess I will tell you about a negative that ultimately turned into a positive.  Not too long ago, I was harassed by a male in my industry. I had never experienced anything like this. Most of the guys I get to work with are gentlemen and also very protective. When this happened, it really threw me for a loop, and I tried to just handle it on my own without help. When it escalated to the point where I could not control the situation anymore, I turned to a few key men in my industry who really stepped up to the plate. They were all equally appalled at the entire situation and helped to not only protect me but also make it stop immediately. It was in those moments that I realized who my friends really are as well as how decent some of the men in this industry can be.

It’s no secret that I am playing in a mans’ world here. I have always been a little bit of a tom boy, and perhaps that is why I can get along with the boys for the most part. When harassment came into play, it was so very foreign to me. It saddened and angered me. On the flip side, however, it highlighted the other 99% of gentlemen in this industry who really had my back.

WiMN: What would you say has been the biggest challenge for you career-wise?

JL: I think for me the biggest challenge is staying focused and on track. There are so many things I want to do. There are so many aspects I am passionate about. I don’t like to be told no or that something can’t be done. I just don’t believe in the impossible. With that in mind, I am constantly challenged with finding like-minded people who have the drive and passion to want to make it all come true. Honestly though, I believe I am meeting more and more people who feel the same, and that is super encouraging.

WiMN: Who have been some of your biggest role models both personally and in the professional music realm? Why?

JL: If we are talking about musicians, I am obsessed with P!nk, Brandi Carlile, Mark Knopfler, and Jason Isbell just to mention a few. I pick these four because I love their writing and all of the brave moves they have made in their careers. I am inspired by them as artists.

In the music products industry, I am influenced and mentored by Alan Friedman and Daniel Jobe. I know this sounds like an easy pick, as I get to work with them on a regular basis, but their knowledge and guidance has been monumental to my growth on so many pertinent levels. I think it is one thing to be able to market and sell your product, but it is a whole other skill set to be able to intelligently manage your business properly. I feel like I have earned a business degree from working with Alan and Daniel. Having the business acumen to make the right decisions or even have an intelligent, meaningful conversation are intangibles that I can not live without.

WiMN: What do you think you’d be doing if it weren’t music?

JL: If I could do anything else in the whole world, I would be a professional golfer. I am obsessed with golf. If I am not working, I am playing golf.

WiMN: Let’s close with your favorite quote, one you think really reflects who you are (music or non-music related, etc.).

JL: I have two, and they are from my favorite human I wish I could meet:

“Apparently there is nothing that cannot happen today.” – Mark Twain

“To succeed in life, you need two things: ignorance and confidence.” – Mark Twain