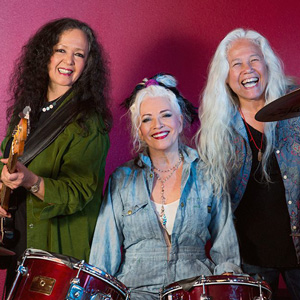 Fanny Walked the Earth, often dubbed as the “Godmothers of Chick Rock,” is an installment of Fanny, the first female band to sign and release a full studio album under a major label in the mid-1960’s. The band consists of sisters June and Jean Millington who come from the Philippines and friend Brie Darling, who left the band early on, but later joined to form Fanny Walk the Earth. June is the guitarist, Jean is on bass, and Brie Darling is the drummer.

The WIMN:  After growing up in the Philippines, how did you discover an interest in music once you arrived in California in 1961?

June: We were already ‘way into it,’ having learned songs off the radio on ukulele while in the Philippines, oftentimes entertaining the whole family either at home or at the beach. Jean and I sang in harmonies even then, too!

Brie: I was born in California. Jean, June and I are sometimes all mistaken for sisters, but only in spirit. I grew up with two brothers and a much younger sister. Our parents introduced us to music as kids and encouraged us to play. My chosen instrument was piano, but I was playing my brother’s drums when a band came to our family home to audition him, they heard and saw me playing…I got the job. I was 14. It was 1964.

The WIMN: Tell us about the rise of Fanny. How was the band discovered?

June: Our band Wild Honey went down to LA from the Bay Area and played Open Hoot night at the Troubadour. The Cohen brothers (who worked with Frank Zappa) were alerted about us and told Richard Perry, who sent his secretary Norma Kemper down to see us. She loved us and raved about the band to Richard, who arranged a private audition at Wally Heider Studio just before he flew off to record the basic tracks for his upcoming album with Ella Fitzgerald. Mo Ostin signed us sight unseen since Richard had just had a hit with Tiny Tim on “Tiptoe Through the Tulips,” they were convinced that as a novelty act, this would work. Little did they know that – just like the Beatles, who were also considered a novelty act – we would stick around just a bit longer.

Jean: We came to LA as a band, Wild Honey, specifically to perform three songs at the Troubadour one night. The audience wouldn’t let us off stage. Richard Perry’s secretary, Norma saw us, and this led to our signing to Warner Bros. in 1969.

Brie:  I met Jean and June in 1966 when I was 16 years old. We played together for a few years before the band made its way down to Los Angeles. I was in the band performing with them, and by the time Fanny was signed, I had left the band. I rejoined the band for the album, Rock and Roll Survivors.

The WIMN: What was the reaction like, being a rarely seen, all-girl band, performing on hugely popular shows like The Sonny & Cher Show and The Dick Cavett Show?

Brie:  Fanny’s 5th album, Rock and Roll Survivors, of which I was a part, charted two singles, including the ‘racy’ (for the time) single “Butterboy” that Jean wrote about David Bowie. “Butterboy” managed to get banned in Boston! While touring the U.S. to promote the record, we appeared on the Mike Douglas Show.

June: People were blown away; there’s no other way to put it. We could play! People, of course, expected us to be able to sing, but play, and play well? That was totally unexpected. Plus, we had really good sounds. With friends like Lowell George, Skunk Baxter, and Elliott Randall, who took it upon themselves to tutor me on both licks and sounds, I was toe-to-toe with anyone out there. We all were.

Jean: We always had to prove ourselves for the first 10 minutes that we actually could play. After that, people loved us.

The WIMN: Did you realize at the time that Fanny was the first ever all-girl band to sign and record a full-length LP with a major record label? What was that like?

June: Yes, we did. It was more than a little exciting, but we had worked so hard towards that goal since 1965. We were already seasoned in so many ways. We were pros, booking our own gigs. All we had to learn was to record, and Richard Perry was excellent for that. By the time we hit the bigger stages, we were fearless, having already faced intense scorn in the early days. But we’d discovered the perfect antidote for that: to be good! So we hit it hard, big-time. It was fun. We knew we’d done it!

Brie:  Although I wasn’t a member of the band when they were first signed, we all still hung out together and often lived in the same home (referred to as “Fanny Hill”). At the time, I didn’t realize that it was history being made.

Jean: We were somewhat aware that this was the first all-girl band to do a full LP, although it wasn’t the first thing on our minds.

The WIMN: Did you ever experience discrimination for being a woman in the music industry? If so, how did you overcome it?

Brie: At the time, discrimination wasn’t as obvious to me as it was to other women musicians that I knew. I knew what I could do, and I didn’t give a f*ck what anyone thought. In hindsight, I can recognize some of it now. It was definitely there. Along with race discrimination, age discrimination, job position discrimination.

June: The only way to face discrimination in the industry is to hold to your center, have your dignity, and be better than anyone else. For that, you need to know how to work. A good work ethic and discipline are excellent allies and will provide an awful lot of armor.

Jean:  Wherever we played, we had to prove that we could actually play. The attitude and energy changed once we started playing. There really was a lot of discrimination to overcome.

The WIMN: Tell us about today’s incarnation of the band, Fanny Walked The Earth. How did it come about? Any releases or tours we should know about?

June: Fanny Walked The Earth is an extension of Fanny; it has the major components from the Svelts (our first band in high school). The fact that we “walked the earth” is tremendously important. While we did it, we faced extreme obstacles (being one of the first was fierce, by definition) and learned not only how to play individually, but also as a band. Many people don’t know what an art form that is in itself. But we had no role models. We had to figure it out ourselves. That took a lot of strength and a sort of inward vision. We talked about it and materialized our goal. And then others got to learn from us, and see a role model. I’m very proud of that and am also interested in continuing that narrative both through action onstage and speaking about it as we do more interviews. This is the time; people need to hear this story. The fact is that Fanny Walked the Earth is critical on a number of levels. I’m lucky to be a part of that.

Brie: Fanny Walked The Earch came about when June invited me to play two Fanny songs with her and Jean for a tribute that was being paid to honor June’s contributions as a pioneering woman musician. I posted a 15-second video snippet of the song “Hey Bulldog” on Facebook, which led to a record deal with Blue Elan Records after their CEO saw the clip.  Our brand new, self-titled record Fanny Walked The Earth will be released March 2018.

Jean: Brie and I were invited to perform a few Fanny tunes at a tribute to June in Massachusetts. We played together for the first time in over 30 years, which led us to us being offered the record deal with Blue Elan records.

The WIMN: Do you have any encouraging words for young women pursuing a career in music?

Brie:  Girls, if you want it…Go For It!…and for every age of women, Keep Going For It! We’re doing it, and you can, too. If you want to be a player, singer, recording artist… work hard while you’re learning and practicing. Mostly, embrace your style, your point of view…you can be as good as anyone else that’s ever been. I support you! I also support Lanny and the MLK’s / Guitar Girls of Afghanistan.

June: Take care of yourself, keep learning about yourself in relation to all obstacles as a woman, believe in your true center, and never stop! You just cannot know what the future really holds, but be ready for it. Mental preparation and stamina are really important. So, again take care of yourself, physically, mentally and spiritually: sleep and eat well. You are part of a long lineage. Trust in that. Be proud!

Jean:  Believe in yourself and pursue it!

The WIMN: What does it mean to be honored at the upcoming She Rocks Awards?

Brie: It will be amazing to stand side by side with my all of my Fanny sisters for the first time. It’s been a long time coming. It’s a wonderful gift you have given us, acknowledging what we had accomplished, back when we were kids.

Jean: Quite an unexpected honor; great to know we are not forgotten.

June: It means that not only we, but all the “unsung” women who came before us, are getting their due. When we step into the light, they will be right with us. And through IMA, where we recorded that album, we are all playing it forward. Our work has not been in vain.

June also has an autobiography titled Land of a Thousand Bridges. You can learn more about Fanny Walked the Earth on their website.