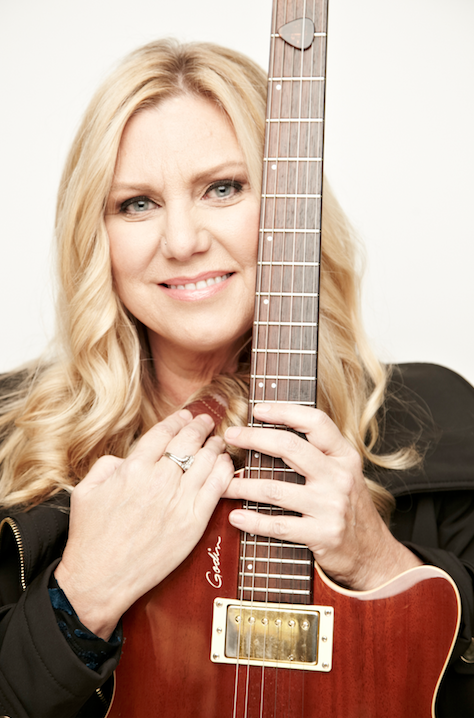 Lisa Baker is a powerhouse guitarist and in-demand instructor. Having played alongside greats like the Wooten brothers and Bill Dickens, she is recognized as the first female to graduate from Northern Illinois University with a masters of music (jazz guitar).

Baker grew up playing the piano and idolizing her mother, a multi-instrumentalist and singer. But it wasn’t until high school that she first picked up the guitar. “I borrowed my mother’s acoustic guitar and she never got it back,” she shares.

Today, her masterful playing has taken her on tours throughout Japan, Europe and North America, where she’s performed as a solo warm-up artist for Rodney Dangerfield, Poco, Alabama, Ricky Skaggs, Tina Turner and others.

In addition to her musical career, Baker recently launched a new talk show series called Live From The Green Room with Lisa Baker, which profiles the lives and music of great instrumentalists. You can find out more at lisabakermusic.com.

WiMN: What is your earliest musical memory? What influenced you to choose a path as a musician?

LB: I remember sitting on the floor in our house in Westminster, California playing a couple 45’s on a little record player when I was about three or four. One of the songs was “How Much Was That Doggie In The Window” and the other one was “Charlie Brown.” My mom is a musician and plays the piano, ukulele and harmonica. I grew up singing while she played jazz and pop standards.

She sang “Hello Dolly” for a junior league community program in the Long Beach Coliseum when I was in about 5th grade, which changed my life. Me, my dad, and my brother sat together on the bleachers. I remember being awestruck by how beautiful she was in her royal blue sequined long dress. That was a memorable moment for me. I decided I wanted to be a “star” like my Mom.

In 1987 I was in Cancun, Mexico with my daughter and husband (at the time) while Hurricane Gilbert struck. It was the strongest hurricane in recorded history. The destruction was so immense that I was driven with desire to stay and help people. When I couldn’t do that, I asked God what I should contribute to make our world better, and the question came to me, “what would you like to do?”

My answer was to play music, which further drove me down this road.

WiMN: Tell us about your involvement with Regi and Victor Wooten and Bill Dickens. What are some lessons you’ve learned playing with such world-class musicians?

LB: First let me say, the best way to get better is to hang around people that play better than you☺. I believe it’s because of Regi Wooten’s teaching that I’m playing today. Regi taught me from the start how to do extreme techniques like speed picking, raking and tapping. He took me from being a folky songwriter to a feature with the Wooten Brothers in Nashville in about a year. It was very motivating to play consistently with his band. With the pressures of being a single Mom I could have easily quit.

Now, Victor is my hero. I appreciate how he treats people, conducts his business, puts out positive messages and of course plays great Bass. More times than I would like to admit, I think to myself when difficult situations arise, how would Victor handle this?

Bill Dickens has really helped me with musicality. Together we’ve worked on timing, tone, guide tones, groove and lines. I still look to Vic and Regi for advice, and Bill – when he can break away from his busy schedule  – helps me with what I need to work on.

WiMN: You’re an active guitar instructor. What do you enjoy most about teaching?

LB: I just like being a part of my student’s lives. When they call and thank me I really appreciate it, and when those “a-ha” moments occur and they’re able to play things they thought were outside their reach, I get a rush. For me, teaching is giving back in the natural cycle of learning. You could say it’s the Yen of the Yang.

WiMN: Tell us about your TV show, Live From The Green Room with Lisa Baker.

LB: Live From The Green Room is a 60-minute weekly talk show profiling the lives and music of great instrumentalists. Working on the show the last nine months has been a blast. We had one shoot for the pilot on April 22nd and are filming again on June 16th. Lord willing and the creek don’t rise, towards the end of Summer, you should be able to view this episode online. Please check out Facebook and like us.

WiMN: Who are some of your role models in the industry – musicians or otherwise?

LB: Besides Victor Wooten and Bill Dickens, I also look to Joe Bonamassa for an example of how to handle business. Regarding guitar influences, I’ll point you in the direction of the great jazz fusion guitarists as well as my favorite guitarist from Nashville, Stan Lassiter.

Learning about women who have created history on the guitar, like Memphis Minnie, Emily Remler, Sister Rosetta Tharpe, Carol Kaye and Mary Osborne has been very empowering. Otherwise, I’m looking to contemporary musicians like Pharrell and Marcus Miller to learn whatever I can, be it business or music.

1. Get your skill level as high as possible on your instrument. It’s the defining factor for guys in choosing who they’ll play with.

2. Don’t let the constraints of being a woman stop you from making a career in music. Be open and find your own path.

3. People are always going to have something critical to say. Their opinions are like flies buzzing around you. Simply take what will help you and disregard the rest while staying focused on your goal.

4. There is strength in numbers, so work with other women to build community and business. This is the way minorities have overcome difficulties and successfully lifted themselves up.

5. Dig down deep inside and find your own voice. Imagine what a beautiful world it would be if more women applied their creativity for the greater good.

6. Studying martial arts taught me that the quickest way from point A to B is just to be B. I say, “assimilate your goal” and my sister-in-law says, “fake it ‘til you make it.”

LB: I would like to offer up a list of challenges I’ve encountered in the hopes that your readers will find comfort in knowing they’re not alone. You need to know that I see challenges as weights to be lifted and puzzles to be solved. I take joy in going into the ring and saying let the games begin.

Those that wanted me to quit should have never expressed themselves because it’s become my fuel to keep going. Regi once shared with me this encouraging insight; listeners who harbor disbelief in your ability to play are the ones that potentially can become your greatest allies. Their emotional intensity doesn’t diminish, they just swap skepticism for support.

1. My parents didn’t want me to be a musician because they didn’t want their girl to be slumming it at night in clubs for little money.

2. My musical boyfriends/husband have usually seen me as a challenge and have wanted to keep me down.

3. My daughter isn’t currently speaking to me because she wished I would have put my guitar down and entered a career where I could have brought home more money. No worries – because I know down deep she’s proud of me. Here you can chat with new people one on one without registration and SMS, completely anonymous! Free webcams girls Our resource will give you the opportunity to communicate absolutely free of charge and without registration. Want to stay anonymous? – please, anything for you. All you need is to enter a nickname and choose the sex and it will be enough to dive into communication with the head.

4. I don’t go out to hear music like I should because I am concerned with my safety – as I should be – out alone in clubs late at night.

5. I was scheduled to audition for a band. Before our meeting, a member called and said that their band is a boy’s club – they later hired female dancers.

6. Once a group of ladies chastised me as I was preparing to sit in with a band, saying that I should be wearing sparkly jewelry.

7. Another time a guy said to me when I was waiting to sit in with Louis Johnson, “do you really think you can play with him?”

8. On more than one occasion after I had just ripped a distortion solo, I’ve had guys say to me, “you can really sing.” I just don’t think it connected that it was a girl playing the guitar.

10. Professors in master’s programs have so much power that they can make a students’ life very difficult. Statistics say that most women who are sexually harassed by teachers quit. My experience at school proved to be more of a test in tactical thinking and of internal strength than a gauge of guitar prowess.

Note to readers: I have a comprehensive Resource Guide For Women posted at lisabakermusic.com that can be downloaded for free.

WiMN: What musical projects are you currently working on? What’s in store for you for the rest of 2014?

LB: I’m passionate about the TV show and believe I will be full steam ahead mode for the rest of the year. Hopefully this will be my outlet for a wide variety of musical and humanitarian projects.

Please check out lisabakermusic.com, livefromthegreenroom.org and the Live From The Green Room with Lisa Baker Facebook page to find out what’s happening.

I would like to thank WiMN supporters for taking the time to read about me, with special thanks to Laura for the invitation to participate and to Tom for his questions.

Enjoy this article? Become a member of the WiMN today! It’s free, and you can signup here>>