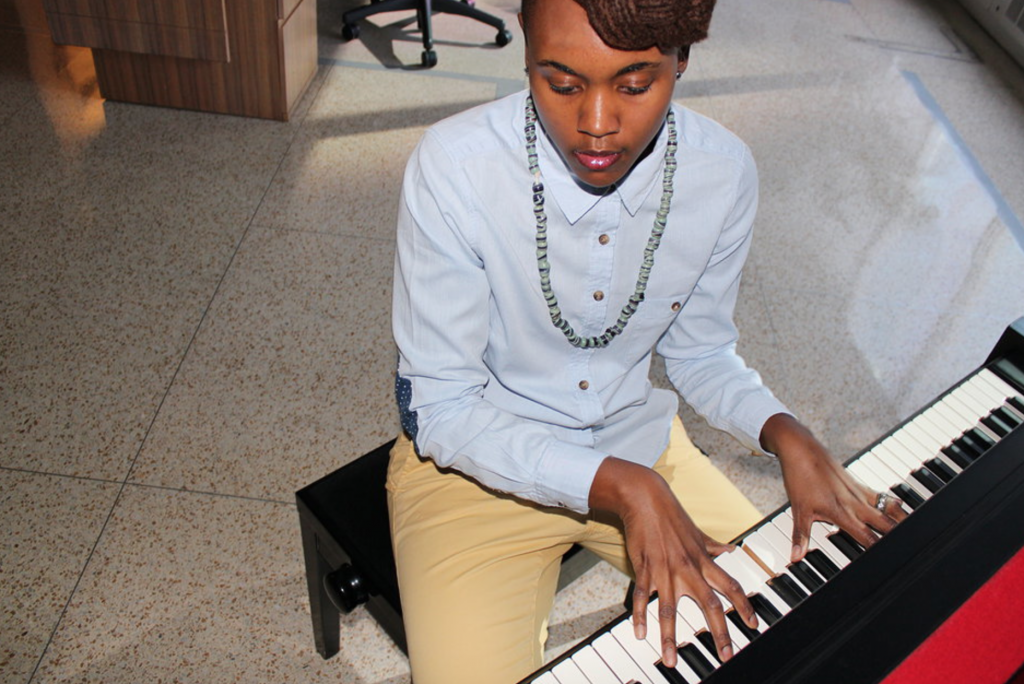 An accomplished musician and entrepreneur based in New York City, Ebonie Smith works as an audio engineer/producer at Atlantic Records, in addition to her work through Eudora House; the independent, boutique music production and publishing company that she created.

Smith is also the founder of the Gender Amplified; a movement that aims to celebrate women in music production, raise their visibility and develop a pipeline for girls and young women to get involved behind the scenes as music producers.

Gender Amplified held their first music festival in September of 2013. This free, day-long event attracted women and girls from around the country, offering workshops and panels as well as performances from artists like THEESatisfaction and more.

Below, we sit down with Smith to discuss music, her career, Gender Amplified and much more! You can find out more about her at eboniesmith.com.

WiMN: What is your earliest musical memory? What influenced you to choose a path as a producer/engineer?

ES: I remember singing nursery rhymes in pre school. I always wanted to make songs that sounded “radio-ready.” I became fascinated with music technology and how it allows artists to create and mass produce music.

WiMN: Tell us about your role as an audio engineer and producer for Atlantic Records. Can you tell us about some of the projects you have worked on?

ES: I get to the studio around 10:30 AM daily, and set up for the schedule. Somedays I will have sessions with artists who are signed to the label. They will come in and record acoustic versions of their hits or records that are scheduled to go to radio soon.

WiMN: Tell us about Eudora House.

WiMN: What led up to the creation of Gender Amplified? What is the mission of the event?

After meeting so many wonderful women producers while conducting interviews for my thesis, I decided to produce an academic conference and music festival of the same name to showcase these women and their awesome talents and stories. We are currently fundraising and identifying partners for a 2015 music festival.

WiMN: Who are some of your role models in the industry – musicians or otherwise?

ES: I have a number of role models and influences, so I am just going to give a list:

ES: The most significant, “gender-specific” challenge that I have experienced involves having few women peers. This is why so much of my work with Gender Amplified involves identifying other women in the audio and production field.

I believe it’s important for women in production to have a support system of individuals who understand their lived experience as women. I rarely come across other women producers on a daily basis. I have to seek them out.

ES: Be encouraged! Each time you make a track, you will get better and better. You never arrive. Production is a constant learning process and you will forever be a student. Be open! You will be surprised who you can learn new things from.

ES:  To continue making great music and plan for the next Gender Amplified Music Festival.

Thanks for reading! Click here to become a member of The WiMN.