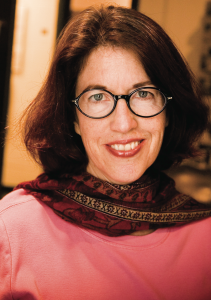 Well before her career as a professor at Berklee College of Music, Susan Rogers was a highly successful record producer, engineer and mixer. Prince, Barenaked Ladies and David Byrne are just a few of the well-known artists she had the opportunity to work with.

However, in the late ’90s, Rogers quit the music business to attend school, where she studied music cognition and psychoacoustics. As quoted in her Berklee College of Music profile, “I loved making records, but along the way I began to realize that I might also enjoy working as a scientist.”

Today Rogers holds a unique position that allows her to combine her knowledge of music and science. She is an Associate Professor at Berklee College of Music in the departments of Music Production & Engineering and Liberal Arts, and also the director of the Berklee Music Perception and Cognition Laboratory.

“To be teaching engineering and production at Berklee is satisfying, because these young people are just starting what will probably be extraordinarily exciting careers,” Rogers says. “I am eager to hear what this generation will do in the service of the music industry.”

WiMN: How did you become interested in music and making records?

SR: Like many kids I took piano lessons and dropped out for lack of interest. My passion was for records. I was a record-and-radio-listening fiend from about age 7 onward. I used to fantasize about being in the studio, despite the few pictures of studios that I had. Perhaps just as some people are innately driven to play or write music, others may be innately driven to listen to it. That could be tested, perhaps!

WiMN: You worked as a mixer/engineer for an impressive roster of artists. What is one of the most valuable lessons you learned along the way?

SR: Haha –– so many that I get paid to teach even the fraction of them that I learned! Working in the arts necessitates that we become expert problem solvers, but we can never encounter every possible one. And sometimes we need time before we realize the value of a lesson.

In hindsight, one of the most valuable for me was to learn to ask the question any three-year-old would ask: “Why?” Once I started challenging my own assumptions and habits, I became more open-minded and better at my job. The other invaluable lesson was to learn how I worked, so that I understood my strengths and weaknesses, and the ways in which I could be of value to people. Producers work to understand the strengths and weaknesses of others, but to know our own is worth the time spent.

WiMN: You left the record industry in the late ’90s to attend school for music perception and cognition. What inspired this change?

SR: I left to begin studies as a college freshman. My decision to leave the music industry in 2000 was inspired about 10 years earlier. I began to envy those with a formal education; I was becoming increasingly curious and excited about the natural world; my fantasies changed from working in a studio to working in a laboratory. It was gradual, but it was definitely a calling. My aim was to work as a cognitive ethologist –– one who studies the minds of non-human animals. I learned about research in music perception and cognition while an undergrad and it made sense to funnel what I knew of the art of music into the science of music. It was a smart decision but I still wonder every single day what it is like to be a pig, or a spider, or a hamster….

WiMN: Tell us about your current position at Berklee.

SR: I teach record production, audio electronics, and analog tape recording in the department of Music Production & Engineering and music cognition and psychoacoustics in Liberal Arts. Most of the students I teach are focused on engineering, mixing, or producing. Some are working towards careers as artists or writers. Others are in film scoring, music therapy, music business, and more. None are science majors but all are musicians and every one plays an instrument or is a vocal principal.

Berklee students know way more than I do about tonal music theory, so teaching them is a lot like teaching grad students. We come together as experts but with different areas of expertise. They are extraordinary students and people, and I have a great deal of respect and affection for them. There is no place like Berklee because of its unique history, faculty, international population, and focus on popular (non-classical) music. It is a teaching college, so I get less research time than I would at a research institution and that’s tough for my science goals, but there is nowhere else in the world where my dual skill set would be put to such full use.

WiMN: Who are some of today’s female producers or audio professionals you respect most?

When I think of these women, I think of the things we laughed about and how easy and immediate it is to have fun with them. We have many things in common, including perhaps that we never apparently regarded our gender as an obstacle. We occasionally or never talk about being statistical outliers or about some of the unique challenges, but I can’t recall any of these successful women complaining that she had it tougher than anyone else.

SR: Fewer external than internal challenges, I suppose. Early on (late ’70s and early ’80s) I worried about what to wear, if I’d be feminine enough to have a boyfriend, if I would have to give up having children or marriage, and things like that. Ultimately I had enough to worry about with acquiring a skill and building a career, so I quit being worried about those things and let them develop naturally.

The people who paid me to provide a skill didn’t care whether or not I had a Y-chromosome (didn’t) or wore Doc Martens (did) or high heels (didn’t) or had a boyfriend (did) or a child in daycare (didn’t). I cared. These challenges were in my head. The only exception, of course, is child-bearing. We can’t deny or overcome the fact that women take much, much longer than men do to successfully reproduce. That is a challenge to those women who decide to have kids. I decided not to. And in full disclosure, when I started out in Los Angeles there were men who didn’t want to work with women and studios that didn’t want to hire women, but I didn’t want to work with those men or in those studios, so we were even! The men I worked with and the studios I worked in were outstanding.

WiMN: What is some advice you’d offer to a young woman pursuing a career as a record producer/engineer?

SR: Learn your skill really, really well. Accept that you’ll never be the best or the worst overall because there is no such thing. Cherish the times when you are so absorbed in your art and craft that you lose yourself. Regard every pleasant and unpleasant stimulus through the lens of your art. For example, if you enjoy a movie ask yourself why –– what elements of it worked so well? If you had a terrible experience at a restaurant, ask yourself why. The proprietor couldn’t have meant for you to have a bad time, so what failed? Hang out with people who are funny and smart. Be patient and understanding with people, but don’t be a pushover. Buy yourself something nice, like a designer handbag or a vintage bass amp. Be yourself with all of your might.

SR: Oh, it will be over in three months! I’m going with students to the AES in Los Angeles where they will compete in the Student Recording Competition. I will be on a panel with Thomas Lund, Bob Ludwig, George Massenburg, and Florien Camerer titled “Loudness Wars: Give Peaks A Chance,” where I will report on auditory change perception and so-called “hidden hearing loss.” I will be speaking at the 9th Art of Record Production Conference at the University of Oslo this December. And, of course, teaching.