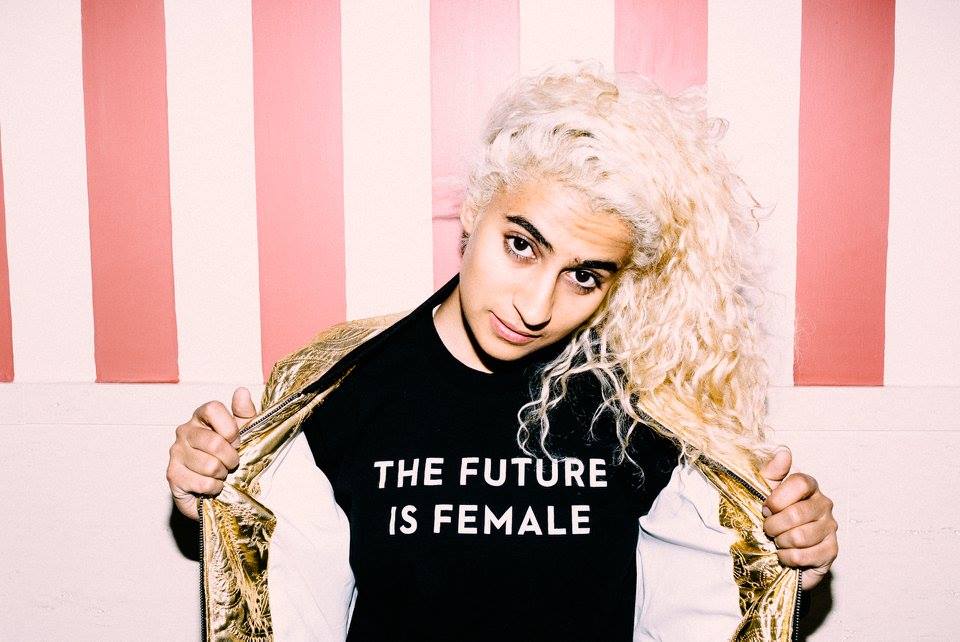 Madame Gandhi is a prime example of young women who are dominating the music industry. Not only is she an accomplished singer, pianist, and drummer (formerly with M.I.A.), Gandhi also studied mathematics and women’s studies while attending Georgetown University in Washington, D.C.. During her junior year, she landed a weekly gig drumming with DJs from Thievery Corporation at their legendary nightclub, Eighteenth Street Lounge. After graduating in 2011, Gandhi became the first ever digital analyst for Interscope Records; assisting artists like Kendrick Lamar and Lady Gaga so they could gain a better understanding of marketing and selling their music.

Gandhi is also an activist and feminist; she gained major recognition as the iconic ‘free bleeding’ runner combating menstrual stigma at the 2015 London Marathon. The marathon was a success and her story went completely viral, sparking a global conversation about how we treat menstruation in various cultures. After graduating from Harvard University in 2015, she traveled the world writing and speaking about menstrual stigma.

She released her Debut EP Voices in the fall of 2016, a collection of electronic songs which reflect her journey as a woman, featuring Gandhi on drums, vocals, percussion, and backed by the intricate electronic soundscapes developed by her collaborator and co-producer, Alexia Riner.

You can purchase her Debut EP Voices on her website here.

I was so inspired by her story and wanting to learn more about Madame Gandhi, and reached out to her for this exclusive interview.

The WiMN: You grew up with a passion for both music and mathematics, studying math in college while touring as a drummer. You also served as Interscope Records’ first-ever digital analyst upon graduating. Do you implement these studies into your music career now?

MG: Of course! Absolutely. Very few artists have the privilege to be exposed to the business side first; we usually start our careers as artists. Because of how I grew up, which was in a traditional academically-minded household, I cut my teeth studying mathematics at Georgetown and studying business at Harvard thinking that my job was always going to be in an office. But, the more I would spend time in an office, the more I felt that my resources were better used as someone who is making art instead.

I used to think, “Wow, how empowering would it be for me to be able to know the business side so that I could never be taken advantage of?” – and, moreover, for me to be able to run my own business in a way that I felt was responsible, financially sustainable, honest, and not greedy. The thing that happened with the music industry is that it became corrupted by greed. It’s like when you find a gold mine and you just want to tap into it and exploit all of its lust and resources, instead of being grateful for the one nugget, and saying, “what can I do with this one nugget of gold?”

When I manage my project, I tell my team that we are not greedy; our job is to make the most honest art and let the world decide what to do with it. If we are getting enough money for our shows, for our licenses, and for our merchandise and other sources of revenue…if we are getting just enough to be able to get by, then this is the right amount.

It feels good to be empowered to say no, to be able to read contracts and analyze them intelligently and understand what is a good fit and what is a bad fit. It feels good to say no to businesses that might have a huge check for us, but ethically are not on brand with what I am about. It feels very empowering especially to be a woman and manage my own career, instead of being at the mercy of larger stakes; larger powers at be. I think it’s mostly because people have a sense that that cannot take advantage of me, and secondly because I am working mostly with a team of extraordinary women and very woke men whose missions align with mine.

The WiMN: Based on your own knowledge and experience, just how important is it for an artist to brand their business via social media?

MG: Social media is a communication tool, the same way I may pick up the phone and call you tomorrow to tell you how I feel. It’s not about doing social media for social media sake, it’s about having a message to deliver and having the choice to decide which is the best medium for my message. So, if it’s a quick thought, maybe Twitter is the best way. If it’s a beautiful photo from an event I did the night before with extraordinary, and I want to show the power of what it looks like to hold space for like-minded, talented women, then I will put that photo up on Instagram. If it’s a video, and I know Facebook video integration is the strongest place to get the most eyes, I will upload that video to Facebook. If I think it’s a song that needs to be made, I’m going to make a song.

The WiMN: What was the first instrument you learned to play, and how did you fall into learning others?

MG: I first learned to sing play the piano, and then drums, learning sound design and music production out of necessity. I was depending too much on other people to come in and lay in the backing vocals, or the sound design and production. I am in a phase right now where I am trying to learn as much of it on my own so that I am in full control of my voice and my artistic expression. Then, when I bring in other people I understand better how to direct them. But, until that moment, I am definitely learning on my own.

The WiMN: Can you tell us about any current projects?

MG: You know, this whole Donald Trump election, and each nightmare that comes into my email box from CNN about what he’s done next is what fuels my music. Having a common enemy, and having very tangible, problematic decisions that the Trump Administration is making that directly threatens the well-being of women gives meaning to my work. So, while I cannot share any of the immediate songs I am working on, what I can tell you is that I have been very deeply inspired in the studio recently, writing a lot of music that I hope only will serve as the soundtrack to the next, sort of fourth wave feminist movement.

The WiMN: You launched your debut EP Voices late last year. How well has it been received?

MG: I can tell you this: after the Women’s March, my song, “The Future Is Female” went viral on Spotify. It hit at number 8 on the Top 50 U.S. Viral Charts, and now it is trending in Australia and Canada. As I said earlier, our job is to make the best and most honest art and hope the right people find it and that they decide what to do with it. I made “The Future Is Female” almost one year before it was found on Spotify, but it was found at the right time, because the Women’s March happened and we needed an anthem. So, I would say it has been received well and it was received at the right time.

The WiMN: Please share with us your experiences after touring the world in 2015 to speak and write about the stigma of menstruation.

MG: Absolutely! I think for me, the journey that I have experienced over the past two years since my marathon went viral, was figuring out how I take the various talents and passions that I have (singing, drumming, speaking, or writing) and merging them into one cohesive experience. That is really my goal – how I design a live experience, because those are my favorite where I am actually connecting with people on the road. Sharing my ideas such that, it sparks them, sparks their ideas, and sparks each of the people in my audience to find their own voice, and be leaders in their own community.

My mom always taught me that leaders inspire other leaders. Our job is not to get a following so that people love us. Our job as artists is to simply be a mirror and a source of inspiration to get everyone activated in their own communities; to be their best selves. This is what that tour was about. It was about me getting better at speaking and performing, such that I can live my purpose even better of elevating and celebrating the female voice.

Below is Madame Gandhi’s video for her song, “The Future is Female”!