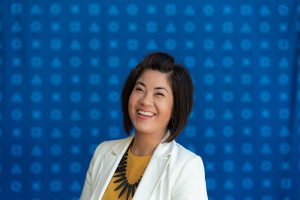 Many of us can remember being a kid and hearing our parents yelling at us or a sibling to “Stop playing video games and do your homework!” In the case of Angelica Advincula, little did she know at the time that playing video games was homework – the kind that would prepare her for her future career at SONY Interactive.

Advincula gained business and music experience working for an indie record label, and then put that experience – along with her interest (and skills!) in gaming – to good use when she joined the SONY team. She now manages a team that creates original scores and licenses soundtracks for some of SONY Playstation’s top game titles, including The Last of Us and MLB: The Show, among others. And as for her gaming chops? She’s a Platinum PlayStation trophy winner.

WiMN: So presumably, someone sitting at your desk would have a background in music, gaming, or business/project management – or I’m guessing in your case, all three! Please share a little about your personal interests and professional background, and how they led you to where you are now.

AGA: It’s a definite trifecta! I grew up gaming with my siblings on the original Nintendo, Sega Genesis, and N64. I’ve always loved gaming and with the engrossing narratives that games have nowadays, I still find myself sinking hours into some games on my PS4. Prior to joining PlayStation 13 years ago, I was working for an indie record label in SF handling promotions, events and assisting in art direction. I truly treasure the position that I have being at a crossroads of both the music and gaming industries.

WiMN: What sort of music did you listen to growing up, and how did that evolve into the music you’ve created?

WiMN: What are some of the challenges involved with creating or curating soundtracks for the gaming industry?

AGA:  Curating tracks is the easy part. Having multiple approvals is a challenge –  it’s getting sign off from various stakeholders including the game’s Creative Director, Audio Director, Studio Leads, Corporate Marketing and so on, which takes a lot of negotiation skills, patience and having a plan B (and C, and D…) at the ready.

WiMN: With so many changes in the past decade or so with the way video games are played, presented, and now streamed, have there been many corresponding changes in the type of music or the way music is used in games?

AGA:  With the ever changing way that games are consumed, music continually pivots as well. Things such as score quality, interactive music systems and how music gets implemented into games continues to evolve. Back in the day, music continually looped almost to an annoying point. With games today, music can seamlessly transition from stealth mode (sneaking around a level and avoiding enemies) to combat mode (battling a boss level or an area with multiple enemies). This seamlessness adds to the player’s immersion into the world, which makes it a more enjoyable gaming experience.

WiMN: Although the music industry overall, and gaming overall, have traditionally been male dominated, is your corner of the audio industry a place where you see growing opportunities for females? Perhaps those who want to score music for video games?

AGA: It’s a slow but definite steady growth. Though my experience has shown the majority of women in more of a support role, it’s affirming to see women lead the charge in the game audio realm. While it is still male-dominated in both industries, there are women game composers blazing the trail. I’m looking forward to hearing and working with more women in game audio. 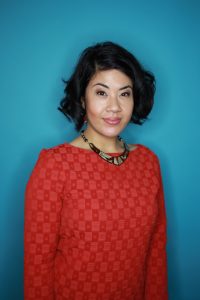 WiMN:   What are some qualities or skills you have that you feel are important for your type of position?

AGA:  Poise under pressure! There’s a lot to juggle with so many projects going on and all of them at different stages of production. Being able to remain composed under tight deadlines, multiple stakeholders, constant schedule changes and budget constraints is crucial.

WiMN: What have been some of your favorite projects to work on at Sony?

AGA:   A few standout titles include Journey – which was a small indie title. It’s a bright feather in our cap as it was the first full-length video game score to be nominated for a Grammy (2013). It was a David vs. Goliath situation as we were up against films composed by legends including John Williams, Hans Zimmer, Howard Shore, and Trent Reznor & Atticus Ross. Although we lost, it was still an honor to be nominated for the work we did alongside composer Austin Wintory.

Another standout title for me was The Last of Us, which is a huge franchise title for PlayStation. I had the opportunity to travel with the crew and document the sessions with composer Gustavo Santaolalla (Brokeback Mountain, Babel, Making of a Murderer) at some of the world’s best-recording studios. I definitely don’t take these opportunities for granted.

To round it out, I also had the chance to wear my Music Supervisor hat and select tracks for CES on behalf of Sony Corp. and Paris Game Show for PlayStation. I’m honored to have an international audience and I forward to the next placement opportunity.

WiMN: What’s one of your high gaming scores you’d like to brag about? 🙂

AGA:  My first platinum PS trophy was with Horizon Zero Dawn. Aloy – the protagonist in the story is an all-around bad ass female character. A platinum trophy or “platting” in a game equates to getting all achievements in the game. I was mesmerized by the environment, the lighting and even the wardrobe details. Horizon Zero Dawn was one of my favorite s to play and it makes it even more satisfying to have a fierce woman as the main character!