Oklahoma native Emily Faith got an early head start on her career at a time when most of us are playing with toys and our biggest project is attending first grade. At 6 years old, she got her first big break when she opened the Woodward Oklahoma 4th of July show for President George W. Bush, Marty Stuart and Sawyer Brown. 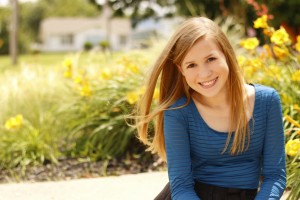 She soon began writing her own songs at the age of 8, as she addressed her own personal struggle with bullying. She has performed at numerous historic venues such as Tootsies and the Blue Bird Café in Nashville, SXSW festival in Austin, and the House of Blues in Dallas and Hollywood.

Having a passion for music, Faith developed her own traveling Opry called the Southern Charm Opry and put together a group of dancers to perform along with her pop sets, the Dead Center Dolls.

She released her third CD Oklahoma Dreams last spring, and is also an aspiring actress. Oh, and did we mention she’s only 12? We expect to see much more from Faith in the future, so keep up with her at http://www.emilyfaith.org, and her Facebook page.

WiMN: What is your favorite memory during your performance at the Woodward Oklahoma 4th of July Show?

EF: A lady at the Oklahoma Opry gave me a shot on their stage for the show. One of the songs I loved was “God Bless the USA.” She was in charge of the smaller stage at the Woodward Oklahoma 4th of July show that President George W Bush was speaking at.

We were scheduled on the smaller stage with the Opry when my mom got a call two days before the show from the main producer. He said that the president had seen a video of me singing “God Bless the USA” and he requested I open the show with that song!

My mom and I got to attend a pre-show event where we meet the president and his wife, Laura; it was an amazing opportunity. We met Marty Stuart and Sawyer Brown as well as their bands. Once the president left the stage the rest of my family was allowed to join my mom and I back stage to watch the bands perform. There were about 10,000 people in attendance, and after that I was hooked on the big stage.

WiMN: Who are a few of your favorite musicians with careers you’d like to emulate?

EF: I love many styles of music and refuse to be forced into one style or genre.

I’ve grown up performing the traditional older country styles like Loretta Lynn and Patsy Cline, along with new country music – I love to tear up a little Miranda Lambert and Carrie Underwood. I love blues, pop, and christian music as well. Because my parents have made sure I am well-versed on so many styles of music, I tend to blend them into my own style when writing, which is a little more of a pop/country/blues feel. I figure that I’m just going to start out as a crossover musician.

The careers that I admire most are the artists who are willing to stand up for who they are. I’ve personally grown up in the heartland where standing up for my faith is very important to me. I really value the positive role models that Taylor Swift, Carrie Underwood and Colbie Caillat have demonstrated.

WiMN: What are some of your favorite songs to cover at gigs and why?

EF: Colbie Caillat’s “Try” because I love stressing to other girls to just be yourself, like Colbie did with this song. Another song is Joss Stones’ “Right to Be Wrong.” I love the bluesy feel and the meaning of the song as well.

I also love covering Janice Joplin’s “Me and Bobby McGee,” just because all of the runs in the song are fun, and I really enjoy incorporating older styles into my show. And of course, how can you not love performing something from Taylor Swifts new album? “How You Get the Girl” is my favorite from 1989.

WiMN: You started writing your own lyrics at 8 because of your experiences with something a lot of people can relate to: bullying. How has writing been therapeutic for you through the tougher times, and have you received a positive response from fans?

EF: I was having a really tough time with the bullying I had been through from a little girl and her mom, and then when I moved to my new school and had another girl that really picked on me.

I miss a lot of birthday and slumber parties because of my schedule, so sometimes it’s hard to fit in. I was really feeling down, so my mom suggested I take Taylor Swift’s approach and write a song about my issues. “Mean Girls” was one of the first songs I wrote, and I had a lot of other young girls that would tell me they loved that song at my shows because they had experienced the same thing at one point in time. Now I’ve found that writing is very much an inspirational thing for me. I don’t just sit down to write – I write when something upsetting or inspiring happens in my life. It’s very much a way of releasing my thoughts and feelings.

WiMN: You’re hitting the recording studio in L.A. to work on an EP with past producer for Fleetwood Mac and recording industry juggernaut Ken Caillat, as well as Sleeping Giant Records. What does this mean to you?

EF: I started working with Ken and his team about a year ago after Kayla Morrison, one of their partners, contacted my mom. Kayla thought I had a special sound and wanted to work with me. Last April they had me as a guest on their show at the NAMM convention in L.A.

It was such an honor to meet Ken and his daughter Colbie, along with so many other wonderful members of the team like songwriter Toby Gadd. I’ve grown up listening to Fleetwood Mac so I am very humbled and honored to get to work with such a legendary producer.

WiMN: You’ve accomplished a whole lot for only being 12. What is your biggest motivation?

EF: The audience. I love watching the crowd enjoy themselves and I especially love it when I can see that I’ve touched some of them. I don’t like watching people cry, but it’s really special to know you’ve touched someone’s heart like that.

WiMN: Where do you see yourself 10 years from now?

EF: After I finish college, I hope to have songs on the Billboard charts and be running my own successful production company. I would love to be able to help out other young performers on their journey, and help raise money for individuals in need. I not only love to perform, but I have found that I love producing.

My years of dance, theater, acting, along with the singing and playing the guitar and piano has given me a passion for putting entire shows together. I’ve recently started my own traveling Opry that I will host. I love putting together the artists, the song list, adding a little comedy to the show, and seeing the finished product.

WIMN: What advice would you give other girls your age looking to pursue music?

EF: Learn to play an instrument. It’s no secret that practicing my guitar and piano are not my favorite things to do! Singing has always come so easily to me, but I have to work at the instruments – it makes all the difference in being a successful songwriter and working with a band. Unless you plan to be a karaoke star the rest of your life, you have to learn to accompany yourself.

And the other thing is be original – if the opportunities aren’t just falling into your lap, make your own opportunities. But don’t just follow other artist leads and copy everything they do – create your own, because God made us all originals.

EF: On July 22 I will be on the Performing Writers showcase at the Fillin’ Station in Kingston Springs just outside of Nashville. July 25 I am performing at Loretta Lynn’s campfire at her ranch at 7:00 pm. August 16 at 3:00 pm is my first Southern Charm Opry show that I am hosting at the Fairview Community Center in Fairview, Okla. And I was just notified by Women of Substance Radio that I will be performing at the SoCal Girls Fest on Sept. 26!