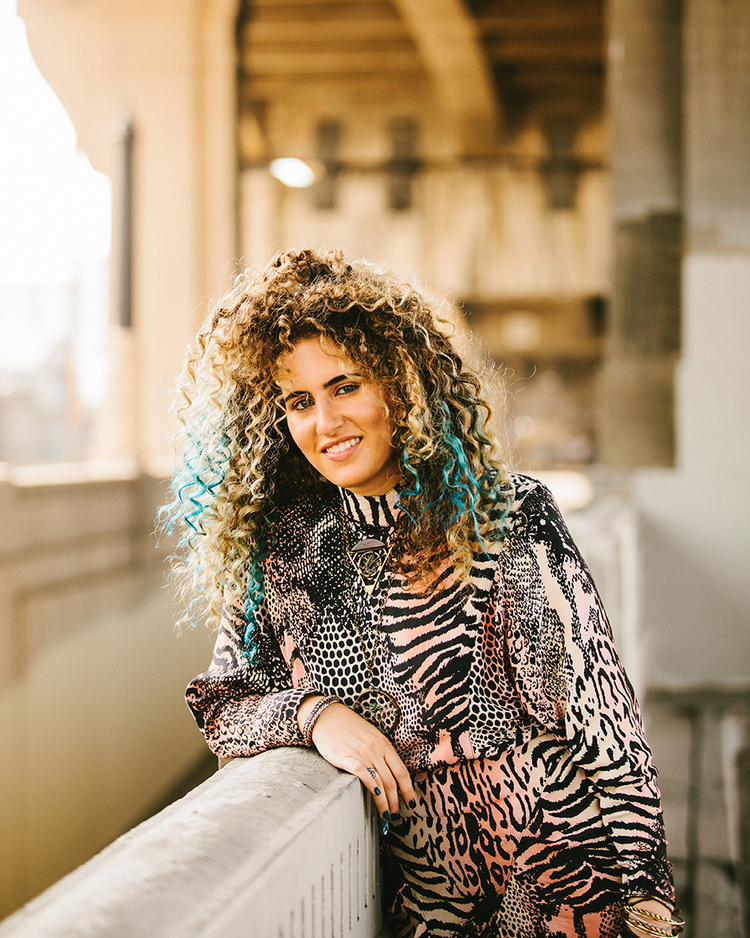 Originally from Saudi Arabia and now based in Los Angeles, TamTam is the perfect musical convergence of West meets Middle East. She masterfully combines musical elements from both hemispheres with catchy melodies and powerful, thought-provoking lyrics.

Her female empowerment tracks like “Little Girl” and “Gender Game” (which TamTam wrote to address the challenges she faces as a Saudi woman who dares share her face and voice with the world), express the feelings and frustrations of thousands of women whose voices are not being heard – and she does it in an impactful and beautiful way.

You can learn more about TamTam at www.tamtamsound.com.

WiMN: How has your multi-cultural upbringing influenced your songwriting?

TT: Growing up in Saudi, my grandmother would listen to older Arabic musicians such as Um Kulthum and Fairuz. They really sang the most beautiful lyrics, which made you stop and listen to the words of the music.

At the same time, I grew up listening to artists like Michael Jackson and the Spice Girls, as Western music is popular in most parts of the world. The newer pop music from the West was more focused on the melody of the song rather than the meaning. A song’s melody definitely inspires the body, but because of my Eastern and Western influencers, it was important for me to write songs that have an impact on both the body and the mind. When I write my songs, the lyrics are very important to me. Each song has a story, a message, and a catchy melody.

WiMN: Describe the defining moment you realized you had to write “Gender Game.” Was there a particular experience that inspired the song?

TT: At the time, I had just finished filming a music video for my song “Little Girl.” I was showing it to some of my family members and they loved it! But they were discouraging me from posting it on YouTube because they didn’t want the world to see my face or to know my name due to cultural reasons. So I asked the director to change the video, and he made it blurry so that no one could see my face, and I also changed my artist name to the moniker “tamtam”.

Even though I had found a way to share my voice with the world, it made me sad to feel restricted in music, which is the one thing that makes me feel so free. At the same time, there were so many Middle Eastern males on YouTube who were not facing any issues posting videos and showing their faces – so that’s when I wrote the lyrics to “Gender Game,” – “I won’t share my face, I wont share my name in this gender game; if I say my name or I show my face I should be ashamed…”

WiMN: How do you balance living and representing two very different cultures?

TT: When I went to high school in California, I learned one of the most important lessons in the world: that no matter how different two people may be from one another, with an open mind, they can be the closest of friends.

It was hard for me to adjust when I first came to California because I was the only Saudi in my school. Soon my friends asked me about my culture, and I would learn about theirs. We learned so much from one another, and we respected each other’s differences. With patience and an open mind, it is easy to see the similarities between people no matter the differences in their upbringing and culture.

WiMN: What responsibilities do you feel you carry as a role model for Saudi Arabian women as a female musician?

TT: Choosing a career in music is not too common in Saudi Arabia. I want my role as a Saudi female musician to encourage other Saudi women to follow their aspirations, no matter what they may be.

WiMN: If you could change one thing about the music industry, what would it be and why?

TT: In order for artists to get representation, they must have a fan base, but to have a bigger fan base, the artist should have representation. This catch-22 in the music industry is definitely what I would change.

Nowadays, labels and management companies are more considerate about social media (Instagram followers, YouTube subscribers…) when signing a new artist. But labels are forgetting that at the end of the day, it’s all about the music. My favorite example of this is Adele. She is not active in any social media platform, yet she is one of the most successful musicians of our time. It’s time that we let the music speak for itself once more.

WiMN: What has been one of the biggest obstacles you have overcome as a musician?

TT: Learning to take constructive criticism while at the same time understanding that everyone has his or her own opinions; and ultimately following your own gut feeling.

TT: I’m a workaholic and I love sports, especially soccer and horseback riding.

TT: I love this quote by Nelson Mandela because it reminds me to always move forward no matter how hard the business gets: “ The greatest glory in living lies not in never falling, but in rising every time we fall.”- Nelson Mandela.