More and more artists are realizing the power in producing their own music. One artist who is experiencing tremendous success with her music independence is singer/songwriter Megan Davies. Based in Nashville, Megan began her music studies when she attended Belmont University. There, she studied songwriting and classical guitar which would later shape the course of her music career.

In 2013, she found worldwide success from uploading her covers and mashups to Youtube. Over time, her creative stylings garnering over 184 million views and more than 1.2 million subscribers. Currently, her catalog on Spotify maintains over 6 Million Streams per month, and in June 2015, her 3-song mashup “See You Again/ Love Me Like You Do/ Sugar” reached #1 on both the US and Global Spotify Viral 50 charts.

Her latest single, “Gimmie” focuses on the pros and cons of day-trading attention through social media and features a clever video – you can view it here! Recently, she collaborated with the Red Cross & American Cancer Society and performed for Hugh Jackman, Zac Efron, Zendaya & the creators of The Greatest Showman and attending the films premiere in New York City.

Megan shares with us on what inspired her single, “Gimmie”, what it has been like working in an industry vastly under-represented by women, and why she finds being an independent artist so rewarding.

Davies is currently on tour. You can purchase tickets here: megandaviesmusic.com 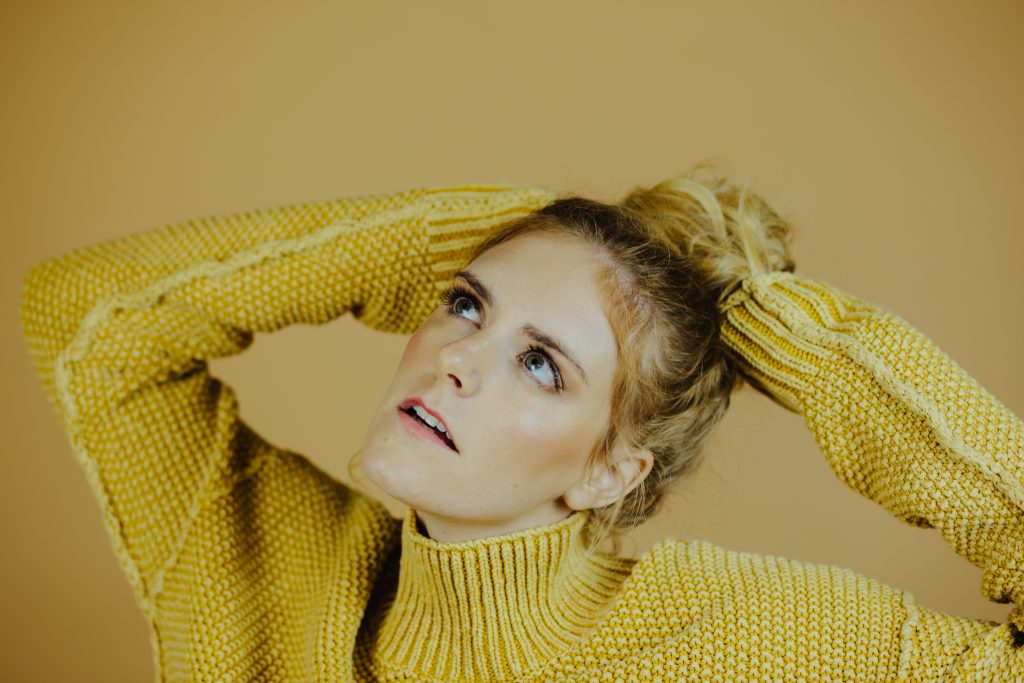 WiMN: How would you best describe your music and genre you most identify with?

MD: I would describe my music as Acoustic Pop. Some tracks are definitely more produced than others, but for me everything starts on my acoustic guitar.

WiMN: Your recent single, “Gimme” focuses on the addiction of day trading attention via social media. Brilliant video as well! Was there anything specific that influenced this song? Especially given the fact your career boost came from million of views to your Youtube videos and Spotify plays (the positive side of social media).

MD: Thank you for the compliment! I had seen this Black Mirror episode called “Nosedive” which showcased the future of social media in a dark way. My success in a lot of ways stemmed from social media, so it’s something I think about a lot. And as much as I enjoy the positive aspects of it, I’d be lying if I told you it doesn’t cause a lot of anxiety for me as well.

WIMN: Recently you performed at our 2018 She Rocks Summer NAMM Showcase. What was that experience like for you?

MD: I loved that show. It felt great to be able to celebrate talented women in the industry. My parents were in the audience that night too and everything about it just felt very special.

WiMN: Women are vastly under-represented in the music industry. Do you find this effects you as an artist?

MD: Yeah it does. I was one of 2 females in a class of 70 some guitar majors at Belmont, so I’ve been aware of it since the moment I moved to Nashville. But I just try to do the best work I can, and I’ve found that focusing on your craft breaks down those walls more than anything else. And on the rare occasion I meet an overtly sexist person in the industry, I make a point not to associate myself with them.

WiMN: Do you play any other musical instruments besides guitar?

MD: Nothing as well as the guitar, but I can find my way around the piano and a few other string instruments like a mandolin or bass guitar.

MD: I’m a super nerd when it comes to audio gear. I have quite a few vintage pieces I’ve acquired over the past couple of years. I still record and mix all the music for my YouTube channel and I love trying different ways of capturing performances.

WiMN: Your original project, Bad Poetry EP was completely independent and garnered nearly 3 million Spotify streams, with the title track featured on Sirius XM’s The Coffee House station (congratulations!) In your experience, what are the pros and cons of producing your own music?

MD: Thanks! Being independent is rewarding in the sense that I have full creative control over what I release. No one is telling me what to say or what to do, and that can be very empowering. However, I think there’s value in having a team and a confidence boost that comes with a large company investing in your future. So there’s definitely pros and cons but I’m just happy to be playing music everyday.

WiMN: What has been some of the best advice you have received that has impacted your career?

MD: All my mentors have always stressed how much of a marathon this career can be. That if you focus too much on the end game it’s easy to burnout before you get there. Focusing on the here and now is what leads to longevity. I’ve found that’s something I always try to keep in mind.

MD: Have a bit of touring coming up this winter! I’ll be going back to Europe for the first time in 2 years, so it should be a blast!