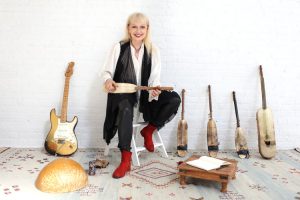 all photos by: Sandrine Lee

Anyone who’s a fan of jazz has undoubtedly enjoyed the work of prolific electric guitarist, composer and bandleader Leni Stern. Coming to America from her native Germany to attend Berklee College of Music, Stern quickly went on to tour the globe at major festivals and clubs, and record nearly two dozen albums.

In recent years, Stern crafted a new sound that incorporates the rhythms, and sounds of West Afrian music into her playing, resulting in the album ‘3,’ which was released in 2018. With that new album, her NYC-based trio’s performance repertoire went on to blend jazz, blues and African music, to the delight of fans everywhere, including a showcase performance at SXSW in Austin.

Recently, Stern and her husband, jazz guitarist Mike Stern, traveled to Europe to play a mini-tour of dates in several countries. Currently on the U.S. leg of their club tour, Stern took some time out to offer reflections on the challenges of being a female musician, the joy she receives from sharing her music around the world, and to give us the scoop on some upcoming new music announcements for her fans.

For more, check out lenistern.com.

WiMN:  Music has always played a role in your life from a young age. What types of music were played in your home in Germany as a child? And what instruments did you first learn?

LS: I grew up listening to classical music. My first instruments were balafons, xylophones and percussion, and I went to a Karl Orff music school for children. When I was seven, I started studying classical piano until I was 17. I also started guitar and voice at age 11.

WiMN: Your early career is well-known for your jazz guitar work. Since then, you’ve become a composer, bandleader, launched a record label, and managed your own work. From this experience, what would you say to other young women looking to launch a music career?

LS: Your musical integrity is very important. Don’t let anyone tell you how you should sound; listen to your own intuition. That is not to say that there are no great teachers, but a great teacher will help you find your own voice. Today it is possible to produce albums and release them yourself, so go ahead. Build a musical community – that is the most important!

WiMN: What has it been like as a female guitarist and touring/recording artist in a traditionally male-dominated industry? Have you had to overcome any obstacles?

LS: When I started playing guitar there were not many women doing it. Today it’s different, but we still are faced with prejudice. I always try to look on the positive side of things, and I’ve realized that I can play way better than many of my peers because as a woman, if you don’t excel, no-one will hire you. Good is not good enough; excellence is the only way. I don’t know if I would have worked this hard if there had been an easier way!

A friend once told me that what other people think is none of my business. That has been very helpful. Just focus on the music!

WiMN: Your musical travels have taken you to the far corners of the globe. What have you seen about the universal power of music in your journeys? How did music help you to form a connection with audiences and all the international musicians you met along the way?

LS: Music is a universal language. It is proof that our common humanity is the greatest bond we have. We feel the same in every corner of our planet! Hearts get broken, we fall in love, we lose, and we dream…we musicians can speak to everyone without saying a word. It truly is a privilege! 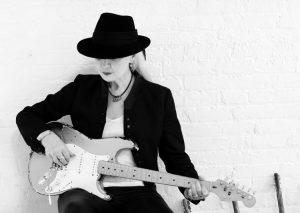 WiMN: You’ve spent the past decade or so studying West African music. What inspired you to fuse their rhythms and tones with jazz and blues to create your album, ‘3’?

LS:   When I started studying jazz, I was always told that the rhythm of Africa gave jazz its identity. I didn’t really understand what that meant until I spent time in Africa and played music there. It immediately became obvious! The rhythms of Africa are as complex as the harmonies of our European symphonies. We all have a lot to learn from Africa.

WiMN: Tell us about the fantastic West African stringed instrument you were introduced to a while back, the n’goni. Depending on how it’s played, it sounds like (at least to this writer), a cross between a harp, a banjo and a traditional Japanese stringed instrument.

LS: I was told that the blues was first played on the n’goni, by my teacher Bassekou Kouyate, so I just had to learn to play it, and I fell in love with its sound!

WiMN: Your current European live dates are with your husband, guitarist Mike Stern. You both blend so nicely and seem to always be very in sync with each other when playing. Is that something that happened naturally, or did you have to work behind the scenes to develop a method for sounding so unified?

LS: Mike and I have been married for over 30 years, and all this time, we have played together every single day. So I guess that’s how it’s done, – just play a lot!

WiMN: Anything new you’re currently working on that you’d like to share, or that our audience can expect to hear in the near future?

LS:  I will be releasing a new song every two weeks from December 6 on. They will be available as a download and on all your favorite streaming services like Spotify. At some point, we’ll press records – I am a huge vinyl fan!

The first song is called “Serrer” in honor of the Serrer people that live in Senegal.

The second one, which will be released on December 22, is called “Princess Miu” and is dedicated to my little black cat Princess Miu.