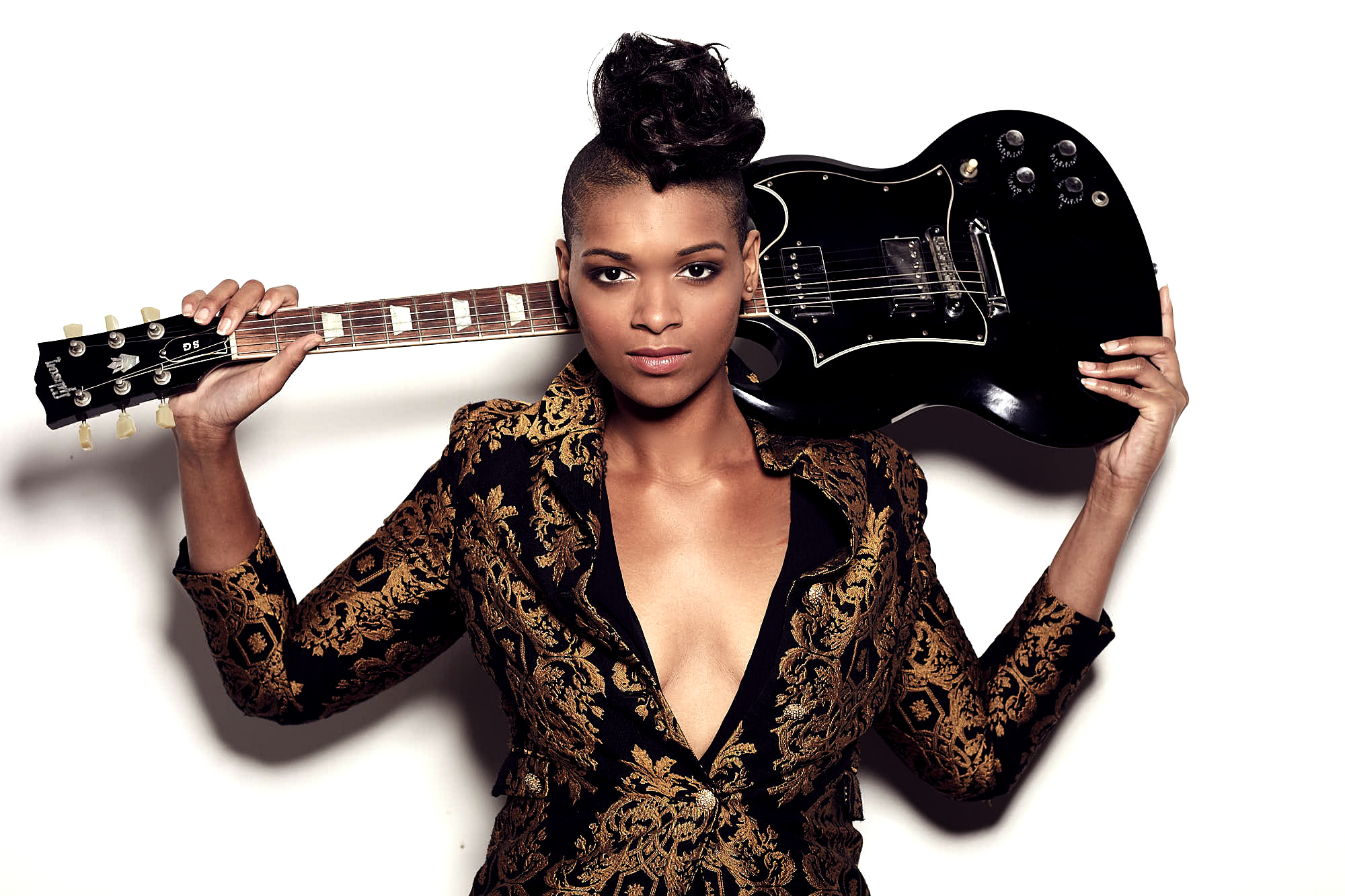 When you first see and hear Halle Johnson you are immediately blown away by her sultry vocals, savvy guitar skills, and captivating good looks. If you listen just a little closer, you will feel the vivaciousness in her lyrics and see the strength in her performance that developed from years of overcoming depression, homelessness, and her battle with severe GERD (Gastroesophageal reflux disease).

The 27 year old Long Beach native has pushed herself far beyond the expectation of others to forge an impressive and successful career in music, and beyond. She was a contestant on Season 16 of American Idol and winner of Guitar Center’s Singer-songwriter contest. She is also a model and a host on Afterbuzz TV. Her love for music began at age 8 with the cello, and continued with operatic and classical vocal training at age 11. It was her painful, exhausting battle with GERD at age 15 that nearly ended her journey into the music industry. Fortunately a former employer convinced Johnson that music was her true calling, which led her to compete in and win the Guitar Center Singer-songwriter contest.

There is so much to her incredible story of triumph that Johnson shares with us in this passionate and inspirational interview. Visit her website at: https://purehalle.com.

Listen to her latest single “I’m Your Girl” on Spotify here.

WiMN: Your experience in music is so diverse; from playing cello and guitar, to vocal and operatic training. How much of this influences your style in song writing and performance?

HJ: These influences have everything to do with how I express myself today as an artist and songwriter, absolutely. I have a huge love for string instruments and playing. I find that as a singer, this allows me to be more relatable to musicians I work with, as a musician myself. I’ve learned that many musicians are used to singers that don’t play, so at times there are communications gaps, in which I don’t experience often. Starting out as an instrumentalist definitely has its perks! I absolutely love playing guitar. It brings the best out of my songwriting because I feel so connected. Opera is a genre of power, emotion and intention. I honestly thought I was going to be an opera singer because I loved it so much, but my love for the singer-songwriter, soul-pop route evolved into my passion. Having a foundation in opera is very much so applied to how I express now and I still sing opera when no one is looking!

WiMN: You talked before on how your tenacity and drive got you into Grammy U. What did you take away from your time there that you still apply in your life?

HJ: Oh wow, Grammy U was an ENORMOUS part of my journey. There I was able to create connections and relationships with successful, Grammy award winning artists, executives, musicians, etc. I have interned for them, supported them and in exchange learned from them as they have continued to follow and support my journey. This is a huge game changer of opportunities that I’m still experiencing to this day. I was able to learn about all of the common mistakes artists and writers make before making them myself. This saved me so much time and energy. Now I’m ready to step into my purpose.

WiMN: What inspired you to go vegan?

JH: To be honest, at age 19, I had a relationship that ended and inspired me to be the better version of myself. This included going vegan because it’s something I was always intrigued by. I didn’t wake up with some profound epiphany that said, “Halle, it is time!”. I was feeling heartbroken and wanted to do more for myself. However, it became an extremely profound and foundational life for me. Now, I chose to be vegan out of morality, planetary, spiritual, emotional, mental and health benefits. I feel so connected to myself and plant based living is a huge part of my human-being. Eight years later, still going strong! 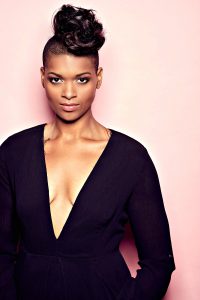 WiMN: Because of a personal health scare your music career almost came to a halt. It was your manager at a previous job who helped and encouraged you to enter Guitar Center’s national singer-songwriter contest. Do you see yourself mentoring and inspiring others to not give up on their call to music?

HJ: I was intern-manager of a consulting firm at this time because by then I almost gave up on music because of all of the health issues I was experiencing. I felt like my body was against me and always in pain, I was on the onset of developing cancer in my throat, and doctors were telling me I’d never sing again. I was barely 22 years old and was already feeling tired and defeated, so I went back to corporate world. The CEO of the company I was working for heard me singing in the hallway one day, called me into the office and mentioned the Guitar Center Singer-songwriter Contest, and after much resistance, I agreed to let him help me create a music video to enter the contest 1 week before my last major surgery. The moment I said yes, he fired me. At first, I was bothered by the “firing” but then I decided I had nothing to lose and the contest was only going to be open for less than 2 more weeks. I was promoting the video with my mother, in the hospital while I was recovering from surgery. When I got home 3 weeks later from the hospital, I received a call from Guitar Center Corporate that I was a top 10 finalist out of over 10,000 entries. I was shocked. This moment lit a huge fire under me. Right when I was about to give up, I received a huge wake up call that lit a fire in me and said, “Keep going, you’re almost there, I promise this is your journey.” I’ve been burning with that fire ever since. I live to inspire. I simply want to inspire others to pursue their passions, regardless of circumstances, by doing just that.

I absolutely love mentoring and inspiring, especially young girls of color, to go for it.

WiMN: It has been a year since your time on American Idol. How has this experience influenced your music career?

HJ: I’m very grateful for my experience on the show. Since then I have been able to expand my career and create new opportunities that have opened new doors for me as a singer, songwriter, musician, mentor and entrepreneur. It definitely put in perspective of how big and important my mission is, similar to what the Guitar Center Singer-songwriter Contest was for me.

You never know how badly you want something until IT is taken away from you.

WiMN: Not only are you successful in music, but you are also a model and TV host (Afterbuzz TV). Could you share with us on how you got into modeling and television?

HJ: Because I was very sick for a long period of time, homeless, overweight, bullied and depressed, I treat life like a bucket list. Therefore, I have and continue to go out to do everything I am afraid of or intimidated by. So far, I’ve: (1) funded my own tour across the country in my car for 6 months performing in nearly 30 states, including the infamous Bluebird Cafe, (2) came back to California and booked a national campaign my first time acting, (3) I walked for a designer at LA Fashion week after training for 3 months, and now (4) I’m beginning my journey as a television host on Afterbuzz TV.

I did not grow up with self-esteem and confidence. I have been told I can’t sing anymore because my vocal chords are too damaged, I can’t travel and do a self-tour because it’s costly and dangerous, I can’t be an actor because I’m too tall and have no experience, I can’t be a model because I’m not a size 0 and have too many tattoos, I can’t host television because it’s a very difficult industry to get into. I have the tenacity to do what I’m told I can’t, and this tenacity continues to pay off on my life and passions.

I have absolutely no regrets because to me, regrets are wasted energy. I’d rather just do everything I desire without looking back. It’s not to say I still don’t experience hardships, self-doubt, set-backs, and pains. None of this is always easy, but this is what I want. I didn’t sign up for easy, I signed up for greatness. When these feelings come up, i don’t punish myself and push them away. I literally allow myself to feel and understand it. I’m still human and it’s okay to have fears and hurts. I allow myself to go through the motions then channel the fears into courage (not fearlessness) and creativity. That’s what makes it easier.

WiMN: What do you have in store for the remaining of 2019?

HJ: This year I am in the works with other television shows, releasing my EP, a publishing deal, a record deal, and mentoring. I’m listening to my inner child, allowing myself to feel, grow, and healed the traumas and hurts that have limited me in the past. I’m so happy and in a deep state of gratitude of my present self, what I have completed thus far, and what I have manifested. Now, is my time and I’m ready to receive it!