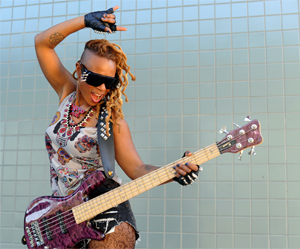 While she’s shared the stage with Beyonce, toured the world with K-Pop megastars 2NE1, appeared on recordings with the legendary Victor Wooten and even performed for the POTUS himself, bassist/vocalist Divinity Roxx is now earning wide recognition for her ambitious solo material.

The WiMN was fortunate enough to collaborate with Divinity Roxx for our 2013 Women’s Music Summit, where our participants had the opportunity to jam with this stellar musician. Today we’re honored to feature her for this latest edition of Front and Center!

Learn more about Divinity Roxx here and be sure to check out her latest music video for “Get Here” at the bottom of this post.

WiMN: How were you introduced to music, and what attracted you to the bass?

DR: I was introduced to music while still in the womb. My mom loves music and I guess that love flowed into my blood. The bass was always the key component of any song I heard as a kid. Thinking back, I always listened and moved to what the bass was doing. Perhaps that’s the main reason I started playing bass…

WiMN: How did you make the connection with Beyonce?

DR: I auditioned like a lot of other female players when Beyonce was in search of an all-female band. It was the first real audition I ever had.

WiMN: What are some of your best memories touring with her?

DR: There are so many great memories. We traveled all over the world with her. I experienced things I never imagined I would. I visited the Louvre and laid my eyes on the real Mona Lisa, I rode a tuk tuk in Bangkok, and visited the Great Pyramids of Giza. I never thought I would become such an experienced world traveler. I didn’t experience my first plane ride until I was 18 years old.

My favorite part of the whole experience however was the creative aspect of it all. I was instrumental in helping come up with elements of the tour show, and that was exciting. My fondest memories are of all of us, Beyonce included, rehearsing for hours and creating different parts of the show. We would bounce multiple ideas off of each other, laughing and delirious from lack of sleep, but we all had one goal: to create the absolute best show possible. When you have that kind of focus from a group of such talent, its just magical.

WiMN: Beyonce is known for setting the bar very high for her band. What did you learn from working with her and this group of musicians?

WiMN: What made you decide to leave Beyonce to work on your own project?

DR: Beyonce was my first real bass gig. I had never aspired to be a “bass player” in someone’s band and live that life. My passion had always been to express the entirety of myself musically and creatively by writing, recording, and performing and there was a part of myself that was hurting and needed to be fulfilled. It was time.

It was a very tough thing for me to decide to do, but I was really hurting inside and everyone who knew me well knew it. It’s funny cuz it’s the “dream job” and anybody would want it in a heartbeat. I certainly wanted it, but not until after I got it. I wasn’t that interested in it before. But I fell in love with it until one day I looked up and realized that something inside of me was dying and I couldn’t take it anymore. So, instead of having a steady gig, I opted for this uncertain dream, this need to express my voice in this musical landscape. One day we’ll find out if I made the right decision.

WiMN: Tell us about your involvement with the K-Pop group 2NE1 and your role as musical director. Many in the US are not aware of how huge this group is in Asia!

DR: A friend of mine called me and asked if I was interested in taking this gig as the MD and bassist for this group out of Korea. I had no idea who they were but when I looked them up on YouTube they had over 10 million views for their video I Am The Best. They were fun, stylish, young, way over the top and just refreshing. I wasn’t gonna do it but my friend and I decided it would be fun to get out of the US and be a part of this growing phenomenon. The group 2NE1 is signed to the same label as Psy, YG Entertainment. It has been crazy to be a part of their movement. I always wanna be in the mix of creativity on the cutting edge. That’s where they are and I love those girls. They’re just awesome!

WiMN: Tell us about your solo material. You fuse lots of different music styles into one – how did you manage to develop this eclectic sound?

DR: My solo stuff is a culmination of all the musical experiences I’ve ever had. I’m still learning how to organize and express them all. This last record was really aggressive, sharp as a sword and hard as steel. It consisted mostly of songs I had written before the Beyonce tour that never saw the light of day. I really needed to get them out and I’m glad I did.

This project I’m currently working on is a better reflection of the Divinity you see and meet when I’m out in the world now. I’ve grown so much personally and professionally. I think the Beyonce experience helped me realize a lot of things about myself that I had no idea about. I’m still discovering things about myself daily. I’m on a serious mission to “know thyself.” I think this next project will showcase a more sensitive Divinity, one who has torn down some walls and is able to allow people the chance to see who I really am and what I stand for. I believe I’ve shed a lotta light on the darkness in the past couple of years.

DR: Of course Beyonce is one of my female role models in the industry. My sisters from the ‘Beyonce Experience’ are too. They’re an incredible group of extremely talented and intelligent women and I’m happy to call them my sisters.

I really look up to women like Queen Latifah, Missy Elliott, Me’shell N’dego O’cello, Ellen Degeneres, Betty Davis, one of my spiritual teachers, Fung Dien Chuan Shr, Nina Simone, Oprah Winfrey, Kerry Washington, and a whole list of other women who continue to lead and pave the way for women to take on leadership positions in the world. I could really go on and on about the women I look up to and the women I didn’t mention are just as important as the women I did.

I got pulled over the other day and when I was telling my friend about the questions the police officer asked me, she was shocked. She asked, “why would he ask you those types of things? They don’t ask me those types of questions when I get pulled over.” All I could say was “it’s because I’m black.”

On top of it all, I got the nerve to be in this world yielding a bass guitar and standing on stage with it expressing all of myself. It ain’t easy. I’ll tell you that. But it is what it is. Life is challenging for everybody. This industry is hard. It’s tough. But it’s really about how you respond to the challenges, how you utilize the lessons in them and grow from them. Yes there are days when I wanna go the f*ck off on somebody, and yes there are days when I feel beat-up, and yes there are times when I wish things were just a little bit different for me, but those moments pass and you move on.

I wouldn’t have it any other way than the way it is because it is what it is. I’m tough. I have to be, but I also have to be gentle, and Beyonce is amazing at being both. I’m really fortunate I had the opportunity to see her be both up close.

WiMN: What’s in store for you for the remainder of the year?

DR: I’m actually headed to Europe to do a couple of TV dates and some live shows in Belgium. I’m also giving a Bass Master Class in France while I’m there. I’ll be playing bass on the TV show Black Girls Rock this year, which is airing on BET. I’m working on finishing my recording project and of course I have a lotta little secret projects I can’t talk about, but if and when they happen you’ll know it for sure.