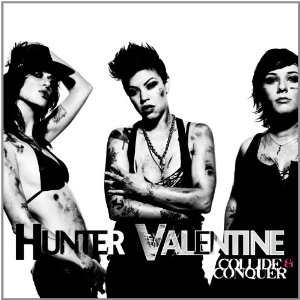 All-female rock band from Toronto Hunter Valentine is bad-ass, and they know it.

The trio recently talked to Noisecreep about touring and making music in what is largely a boy’s world.

“There are fewer female bands but still, it’s whatever world you create and whatever you make of it,” they told Noisecreep. “We’ve created good surrounding for ourselves, we have lots of male supporters, but most of our business team are women, our agents, the person that signed us – we call it Team Ladykiller.”

Team Ladykiller indeed. Hunter Valentine has released two records, including their most recent Collide and Conquer, and was featured on the Showtime series The Real L Word.

The band is currently touring with punk rock hit-makers Sum 41. Check out tour dates and a sample of their music below. Read the full interview on Noisecreep.com.