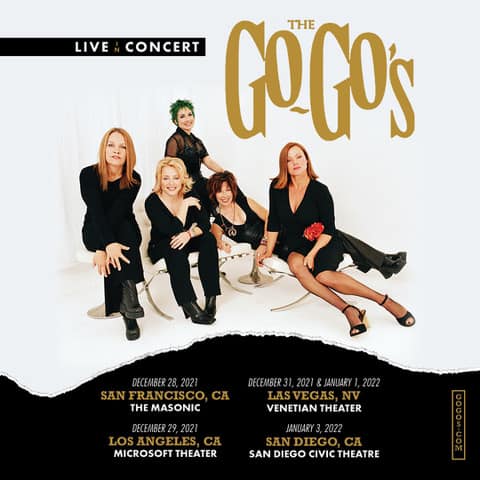 The Go Go’s just announced a mini West Coast tour in America! They were recently inducted into the Rock n Roll Hall of Fame, and will celebrate with a four date performance tour beginning in December 2021. Tickets go on sale Friday June 25th.

For showtimes and locations, visit: The Go-Go’s | Linktree.

After breaking onto the Los Angeles music scene in 1978, the multi-platinum, all-female American band The Go-Go’s still rocks over three decades later. Born out of the L.A. punk scene, Charlotte Caffey (lead guitar, keyboards and vocals), Belinda Carlisle (lead vocals), Gina Schock (drums), Kathy Valentine (bass and vocals) and Jane Wiedlin (guitar and vocals) didn’t play the part of bad girls – they were genuine punk rockers. The Go-Go’s made history as the first, and to date only, all-female band that both wrote their own songs and played their own instruments to ever top the Billboard charts.  The Go-Go’s rose to fame during the early 1980s after the release of their 1981 debut album, Beauty and the Beat, which was #1 on the Billboard charts for six consecutive weeks, one of the most successful debut albums of all time. The album, which went triple-platinum in the US, was also on Rolling Stone’s list of “500 Greatest Albums of All Time” and it featured their hit singles “Our Lips Are Sealed” and “We Got the Beat.” In 1982, The Go-Go’s were nominated for a Grammy Award. In 2011, The Go-Go’s were honored with a Star on the world-famous Hollywood Walk of Fame.  “The Go-Go’s” Documentary premiered at the Sundance Film Festival in January 2020 to wide critical acclaim. It was released on Showtime on July 31, 2020 to general audiences.  The film follows the band from its punk rock beginnings to global stardom. We honored the Go-Go’s at the 2021 She Rocks Awards.