Rock ‘n’ Roll Fantasy: The First EVER Women Only Camp 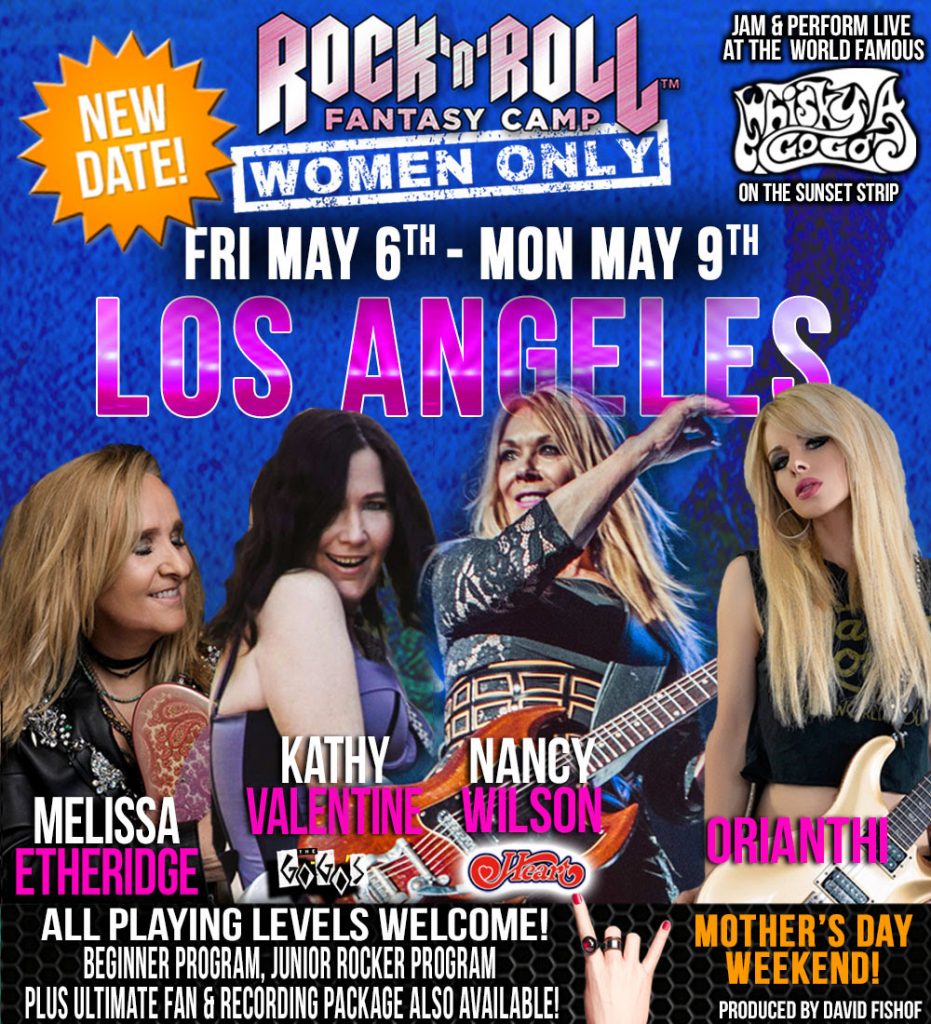 “The thrill of attending Rock ‘n’ Roll Fantasy Camp is the up close and personal attention each camper receives from our RockStar counselors. With the current restrictions, this completely changes the whole experience. Looking forward to rocking out safely Mother’s Day Weekend.” – Nancy Wilson

The uncertainty around the current surge here in Los Angeles has proven to be too concerning; for the safety of all, we have made the tough decision to postpone and move the first ever all women’s camp to Mother’s Day weekend – May 6-9, 2022. Nancy Wilson (Heart), Melissa Etheridge, Kathy Valentine (the Go-Go’s), Orianthi and the rest of our rockstar counselors will all be on hand in May!

Stay safe everyone and let’s ‘Rock Like a Mother’ this May in LA!

Rock ‘n’ Roll Fantasy Camp recently unveiled its first ever WOMEN ONLY Rock Camp! This ground-breaking camp will take place in Los Angeles, CA over Mother’s Day weekend, May 6th-9th, 2022 with special headlining mentors including Melissa Etheridge, Nancy Wilson, Kathy Valentine, Orianthi, Gretchen Menn, and more. In addition to the women headlining, the crew and staff working on the event will be composed of an entirely female workforce. In addition, the multidisciplinary guest speakers from the music and recording industry will incorporate talented women led by Britt Lightning (Vixen), the musical director for the entire Rock Camp organization.

Campers can reserve their spot now at Rockcamp.com.

Excited to be a first-time mentor, rocker and She Rocks Awards Honoree Melissa Etheridge said, “It’s so inspiring having organizations such as The Rock ‘n’ Roll Fantasy Camp embrace and support women in the music industry. I’m looking forward to meeting the campers and collaborating with everyone there!”

As the veteran mentor on the team, Heart’s Nancy Wilson (also a She Rocks Awards Honoree) exclaims, “The Rock ‘n’ Roll Fantasy Camp is always a joy to do. Looking forward to the first ever all girl camp this year! It ought to be extra cool and extra fun.”

At the signature Rock Camps, participants form a band where they are then mentored by their rock star counselor and rehearse songs to jam with the special guests. Some of the rockstar mentors for this Girls Only camp include heavy hitters like Rhonda Smith (Prince, Jeff Beck), Jennifer Batten (Michael Jackson), Eva Gardner (P!nk, Gwen Stefani), Ashley Reeve (Cher, Filter), Jennie Vee (Eagles of Death Metal) and many more. Throughout the four days, campers will experience masterclasses, Q&A sessions and themed jam rooms.

Mentor Kathy Valentine (The Go-Go’s and another She Rocks Awards Honoree) is eager to join the campers, “How cool is this? My first in-person rock fantasy camp experience will be with the first women only fantasy camp. One of my favorite things about the virtual one I did last year was getting the opportunity to encourage, inspire, and share what I’ve learned in my career with campers.”

Enthusiastically, Orianthi echoes Kathy’s sentiment, “I’m so excited to be a part of Rock ‘n’ Roll Fantasy Camp again! This time with some amazing women, can’t wait to share some of my stories and hopefully inspire more campers to rock on and never give up!” Orianthi is a She Rocks Awards Honoree, previous Co Host and has performed for the event.

This exclusive Women Only Camp experience is a safe, non-competitive environment for women of all ages to take their skills and confidence to the next level, realize their dreams are possible, while creating bonds and friendships for life with fellow musicians. Explains counselor and Camp Music Director, Britt Lightning, “Camp becomes an emotional and life changing experience for both campers and rockstars, as you witness transformations in people both musically and emotionally.” As The Who’s Roger Daltrey concurs, “It’s an amazing experience and it makes you remember where you came from.”

April Samuels, a former camper, is thrilled to be partnering this year with Rock ‘n’ Roll Fantasy Camp. In 2011, April had just completed chemo treatment for breast cancer and wanted to celebrate by going to Rock ‘n’ Roll Fantasy Camp to see one of her favorite musicians, Sammy Hagar. Attending camp helped her expand on her nonprofit, Breast Cancer Can Stick It! Foundation, Inc. “Coming to Rock Camp gave me the idea to incorporate celebrity drummers in our events. Now every year at our largest annual fundraising event, Drummathon, we feature rock star celebrity drummers! It’s really had an enormous impact in our fight against breast cancer through Breast Cancer Can Stick It!” Samuels continued, “I’m excited our nonprofit is partnering with my friends at Rock ‘n’ Roll Fantasy Camp for this very special women’s camp!” The Camp will supply signed gear to auction for Samuels charity and will also make a donation to Breast Cancer Can Stick It! Foundation, Inc.

Rock ‘n’ Roll Fantasy Camp was created 25 years ago to provide real people the once-in-a-lifetime experience of connecting and jamming with their musical heroes. The Camp has provided unforgettable memories, advice and feedback for attendees worldwide. Camp events span over four jam packed days where campers join a band mentored by today’s top touring musicians, and work up to final performances with the headliner rockstars at legendary venues from Abbey Road Studios in London, to Hollywood’s Whisky a Go Go, to the Atlantic resort in The Bahamas.

The in-person Camp announcement comes on the heels of the tremendously successful 2021 documentary Rock Camp, The Movie. “Entertaining”, “inspiring” and “moving” are how critics, audiences and industry leaders describe the new documentary Rock Camp. The film follows four real people who attend Rock ‘N’ Roll Fantasy Camp and how it transforms their lives. These “rock campers” share the stage with superstar counselors including Roger Daltrey, Alice Cooper, Gene Simmons, Paul Stanley, Nancy Wilson, Joe Perry, Judas Priest, Sammy Hagar and many more. Rock Camp is directed by Doug Blush, who has worked on 100+ documentaries (including Oscar winners 20 Feet from Stardom, Icarus, and Period. End of Sentence.).

Rock Camp, The Movie has generated great word of mouth and buzz, scoring a 94% Fresh rating on Rotten Tomatoes, and continues to hold the #1 Music Doc spot on iTunes/Apple TV. The film has been featured on The Today Show, The Tonight Show with Jimmy Fallon and on ABC News. The Washington Post called Rock Camp “an eye-opening treat,” and The Chicago Sun-Times described it as “infectiously upbeat.” Music industry critic and influencer Bob Lefsetz raves, “I couldn’t turn it off. Rock and roll is a religion.”