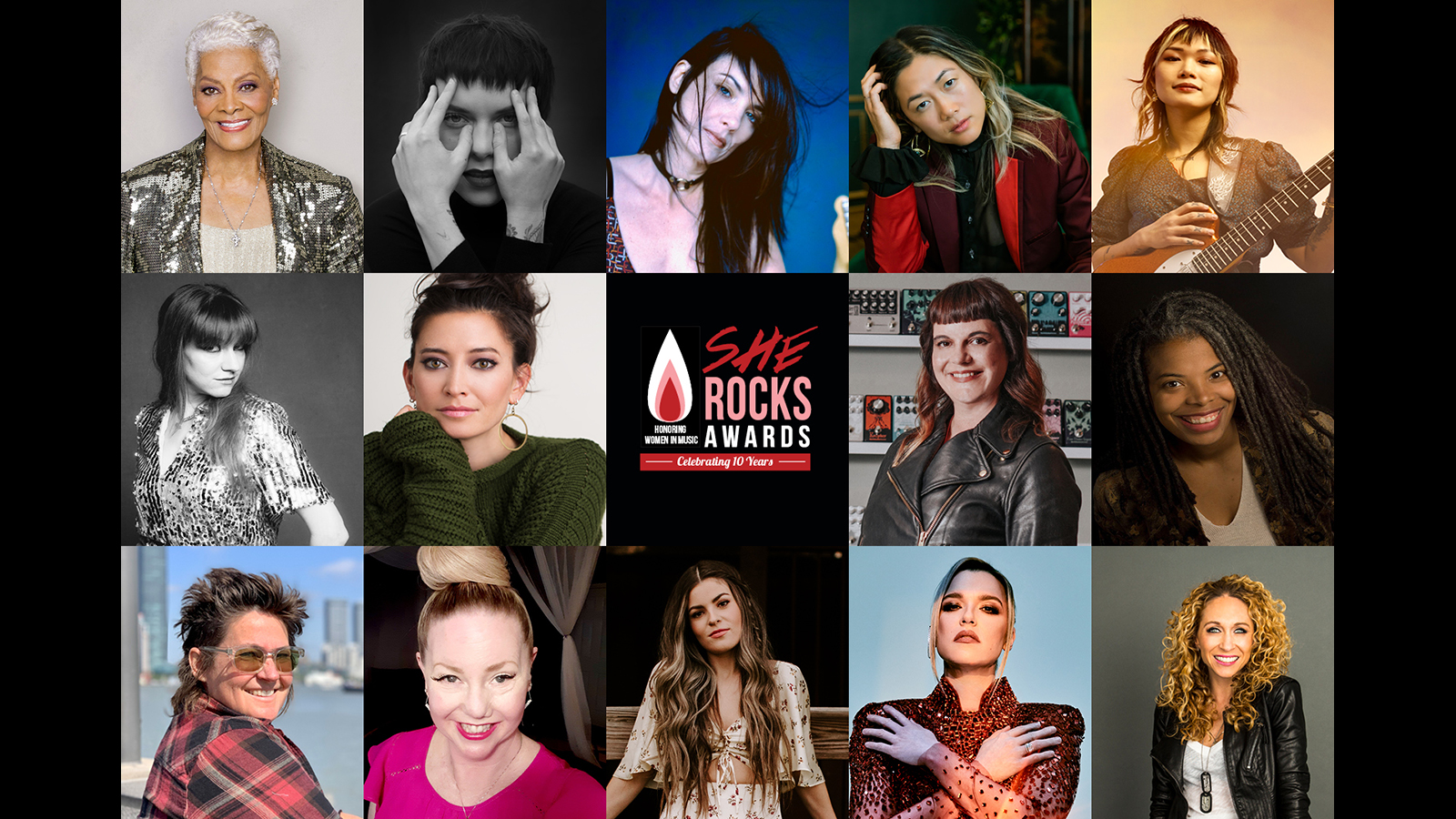 The Women’s International Music Network (the WiMN) is proud to announce the honorees for the 2022 She Rocks Awards!
The ceremony itself will continue to pay tribute to women in the music industry with the 10th Annual She Rocks Awards, taking place at 6:30 pm PT on Thursday, June 2, 2022, at a new location – The Ranch in Anaheim, CA and will be streamed live. The event is set to feature a stellar array of soon-to-be announced fellow honorees in what will be a hybrid of in-person and virtual components, to adjust to the current times and worldwide fanbase that was created during last year’s all-virtual event.

This high-energy evening will include live music performances, awards and speeches, celebrity appearances, a fabulous online silent auction, and much more. A VIP gift box is also available, the ultimate She Rocks experience for those viewing the live stream from home. All packages and tickets are available for purchase now.

The 2022 She Rocks Awards recipients include:

Surprise guests and performances as well!

Hosted by PRS Guitars, this year’s opening performer will be Canada’s own Platinum Award-winning singer/songwriter/guitarist, Tenille Arts, who was recently nominated for an Academy of Country Music Award for New Female Artist of the Year as well as a Juno Award for Country Album of the Year for her album, Girl to Girl.  Returning to the She Rocks Awards are the Command Sisters, Charlotte and former She Rocks honoree Sarah as the house band, accompanied by Christina Torres.

The landmark 10-Year Anniversary event is co-hosted by former She Rocks Awards honoree Lzzy Hale, world-renowned frontwoman of the GRAMMY®-winning rock band Halestorm and host of the AXS TV original series A Year In Music joining fellow AXS host Katie Daryl, the acclaimed executive producer of highly-rated AXS Network and digital series The Top Ten Revealed and At Home and Social.  In fact, Daryl sat down with Dionne Warwick on March 17, to discuss the trailblazer’s legendary career and her upcoming She Rocks Awards. Additionally, Yahoo Entertainment/SiriusXM’s Lyndsey Parker will be hosting the virtual red carpet.

“She Rocks has some truly iconic recipients this year, including Dionne Warwick, who I recently had the pleasure of interviewing,” Katie Daryl added. “I am so proud to be a part of this special event alongside my fellow AXS TV star Lzzy Hale, and cannot wait to celebrate 10 years of She Rocks and all of the influential women who make the music industry continually move forward and innovate.”

Lzzy Hale said, “I’m so honored that the She Rocks Awards have asked me yet again to host the show, along with Katie Daryl, from another adventure of mine, my AXS TV family.  I look forward to celebrating the power of women in the music business and the communion of the sistership we share.”

She Rocks Awards founder Laura B. Whitmore comments, “It’s been my pleasure to honor amazing women in music and audio for 10 years! This year’s show will inspire and energize all, both in person and via our livestream. I’m thrilled to kick things off with our announcement of these iconic performers. They are true groundbreakers!”

The She Rocks Awards pays tribute to women who display leadership and stand out within the music industry, and has become a standard at the NAMM Show. Previous award recipients include: Melissa Etheridge, Pat Benatar, Gloria Gaynor, The B-52s, Suzi Quatro, Colbie Caillat, Sheila E, Chaka Khan, Ronnie Spector, Orianthi, Lisa Loeb, The Bangles, the Go-Go’s, Cherie Currie of the Runaways, Cindy Blackman Santana, Margaret Cho, Amy Lee and many more, plus a collection of role models from all walks of the music and audio industries.

Learn more about the She Rocks Awards, purchase tickets and find out how to watch the live stream the evening of the Awards, at sherocksawards.com. Watch Katie Daryl’s insightful sitdown with 2022 Honoree Dionne Warwick HERE.