An elegantly erratic body of work documenting her coming-of-age as an artist, the four-track collection is available now on all streaming platforms and features artwork designed by Sirola herself.

Created in Berlin with Swedish producer/songwriter Gustav Nyström (Tove Styrke, Winona Oak), Who?’s spellbinding lead single “A Little More” is a heart-on-sleeve outpouring of regret for risks not taken; fully affirming Sirola’s gift for articulating the most universal emotions with the startling originality and eloquence of a poet. 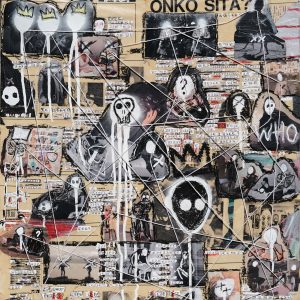 In Sirola’s own words, “It’s been a long time coming for my first full body of work to finally come out. I chose these four songs because they each represent a different part of my life in the past – they don’t represent who I am right now. As a result, Who? tells the backstory in the form of lyrical, audio and visual content, to further understand the ‘who’ I am now. Like many books, you get to know the history of the character first before you dive into the now, it lets you understand the process in a different light, and perhaps allows you to dive into the many layers just a little bit better.”

The Who? EP was heralded by singles “All In My Head” and “End Of The Day” – the latter of which arrived alongside an exclusive signing announcement via Consequence, who raved, “‘End Of The Day’ embodies Sirola’s unique voice. Starting as a soft-spoken piano ballad, it soon falls into a world of dramatic synth pads and a drumbeat that sounds like it’s ripped from a club hit — all without losing its emotionality.” This mix of influences and creative voices is clear across every track; a songwriter since the age of eight, the 23-year-old Finland native landed her first record deal at 12 and spent much of her late adolescence and early adulthood living in such far-flung cities as L.A. and Berlin and London, gradually shaping a singular musical identity informed by everything from art-pop to techno to the more esoteric edges of folk, jazz and experimental music.

Offering a dazzling first glimpse at the wild expanse of her creativity, Who? is a gorgeous introduction to Sirola as a singular creative voice.