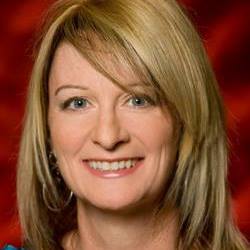 From stay at home mom to part-time blogger, Lisa Walters knew there had to more to life than raising two kids and writing about her home life experiences in her blog, At The Stroke of Midlife. Not to say being a mom isn’t fulfilling, but after separating from her husband in 2008 Walters craved a bigger outlet for her writing and love of music. She discovered local music venues and started a music blog, After The Encore which was well received in her hometown of Sacramento, CA. This sparked a flame within and in 2012 launched her music webzine, Soundz Of Norcal.

Walters partnered with long time friend and professional concert photographer Kevin Graft of Rokfoto and set out to create a central hub for music lovers to learn more about their beloved music scene and to give local musicians a home to promote their music. Their first featured band was Oleander.  Initially the focus was on their music webzine, but with the growing demand for a social media presence, Walters turned her focus onto social media platforms like Instagram, Facebook, Youtube, and Twitter while incorporating a bi-weekly email called, Soundz Newz.

Over the past four years, Soundz Of Norcal has covered many events and concerts such as Sacramento’s Concerts in the Park, the Jeff Keith Ride for Reason/Rock for Reason events, the NorCal Tattoo and Music Festival, the Sacramento Blues Hall of Fame awards ceremony, The Sacramento Music Festival, 98 Rock’s SacTown Rocks, V103’s BandCamp/RockFest, UpRoar Music Festival, Mayhem Festival, and the Aftershock Festivals.  NAMM (National Association of Music Merchants) has also been a favorite event to cover which Walters has attended since 2012, including the She Rocks Awards.

Walters discovered many talented artists in the Sacramento music scene and has become a key part of the support network, “This community is filled with incredibly talented, incredibly friendly, incredibly generous folks. People who genuinely like each other and want to to see each other succeed. It’s a frustration of mine that we don’t have more opportunities to acknowledge that and that the powers-that-be largely ignore the local music community. I hope that Soundz of NorCal fills that gap with our efforts to promote the local scene right alongside the national acts that come through Sacramento and Northern California.”

Walters is looking forward to covering the She Rocks Awards and NAMM in 2017 and credits her connection with Laura Whitmore for her upcoming interview with the guitarist extraordinaire Nita Strauss, who was the awards ceremony cohost in 2016. Walters adds, “Laura Whitmore is such an inspiration to me and has been so gracious throughout the years – I’m constantly in awe of her and the Women’s International Music Network. Every year the She Rocks Awards just gets bigger and better and I’m usually sitting there thinking ‘WOW, am I really in the same room with all these amazing people?'”

Lisa Walters continues to represent Sacramento’s thriving music scene with flare, drive, and passion. To learn more about Soundz of Norcal and subscribe to their newsletter visit their Facebook page here.