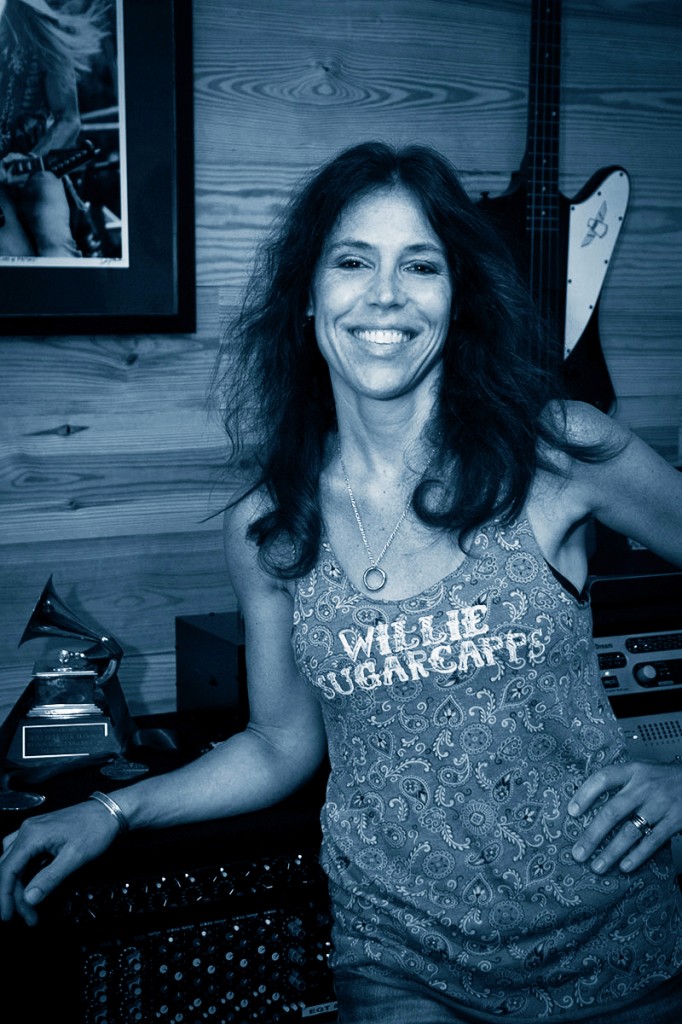 According to the Women’s Audio Mission, females make up less than 5% of audio engineers in today’s industry.

However, while women are certainly under-represented in this field, there are still a those who have managed to buck the trend.

Trina Shoemaker is one of these women. A quick scan of her discography shows a diverse and impressive track record – she’s recorded, mixed or co-produced material for Iggy Pop, Emmylou Harris, Queens of the Stone Age, The Dixie Chicks, Sheryl Crow and many others.

Shoemaker’s talent for engineering and producing is matched with a tenacity that has made her one of the industry’s most sought-after female audio engineers. She’s been recognized with a number of Grammy Awards, and is the first woman in history to win a Grammy for Best Engineered Album, Non-Classical (for Sheryl Crow’s The Globe Sessions).

Today, Shoemaker lives on the Alabama Gulf Shore with her children and husband (musician Grayson Capps), and works from her home studio. Find out more here.

WiMN: What are some of your earliest musical memories? What led you down the path to becoming an engineer?

TS: The first melody I recall is “The Little Drummer Boy.” I was three. This melody moved me in a way that would become familiar as the years passed. The feel of my chest dropping and widening. It made me very still.

Many songs came after that, but the soundtrack for Jesus Christ Superstar may have been the crucible. I would sit for hours with big ’70s style headphones listening to that double album and fathom big arcs for the instruments which I would later learn was panning.

Although music was and remains the driving force of my life, my path to becoming an engineer was heavily influenced by the environment in which my dad worked. As a young man he was a dispatcher for Midwestern Gas. The dispatch room was located underground. This was a safety measure in the event of an explosion involving the huge gas pipes that surfaced at the station.

This underground room, called “the control room,” was sequestered, safe and warm. There were great meters and valves and pieces of equipment. In the center of the room was the “board” which was like an enormous Lite-Brite. It tracked all of the pipelines coming down from Alaska. My dad would take me to work with him sometimes. He’d often work the midnight shift and I’d be there with him late into the night (probably not allowed by Tenneco but I was there nonetheless).

My parents had recently divorced and I’m sure I felt a great deal of security in that room with my dad. I was eight or so at this time. It didn’t occur to me until well into the second decade of my recording career that I had recreated, in part, this environment from my childhood.

WiMN: What are some of the most memorable projects you’ve engineered over the years?

TS: They’re all memorable. They really are. Some are great memories and some are bad. What is significant and enduring is whether or not I became friends with the artist and remain friends to this day. Most of my closest friends are people I met making records.

WiMN: Can you tell us about some of the projects you’re working on currently?

I very recently finished a production for Kathleen Smith, an LA-based independent artist. I also finished up album mixes for Hollow Wood and Cary Hudson.

WiMN: Would you mind sharing your Hurricane Katrina experience?

TS: Well, I lost my house and pretty much everything I owned. It was overwhelming. I remember feeling a tremendous sadness when I finally realized my house was filled with filthy water. It wasn’t because I knew everything was ruined; I worried that my house was lonely and frightened and abandoned in this scary lake of black, seething water. It was irrational, but my house suddenly seemed like a living thing that was left to drown like a homeless animal. But I was never lost or hungry or thirsty or wet. My baby had a clean, dry diaper and I was in a safe, dry place.

I’m not a risk taker. We evacuated 48 hours before landfall. Although we didn’t go far – so when the storm hit, we still lost power and were faced with the threat of tornadoes. I still live on the Gulf but we’re 30 feet above sea level instead of 12 feet below.

WiMN: We’d love to hear about the studio you built, Local Honey Studio.

TS: It’s humble and it sounds great. I can’t brag on any gear. I have some nice things but since I don’t have a lot of money, I have to rely on my ears and my creativity. Mixing happens in my head. I’m the most significant piece of gear in the room. It’s very cozy and private. I don’t like anyone to come in here. I prefer to work alone.

TS: I don’t have any context other than being a woman, so my experience as a woman must be similar to a man’s experience being a man in this or any industry. I can tell you as a human being that I’m not terribly fond of the music industry. I love recording and mixing sound. I love fat old tube gear. I love the smell of dust burning when an amp is turned on. I love the smell of 2” Ampex tape. I love extremely loud and great sounding speakers.

However, having a baby and working 12-14 hour days was a challenge. I chose my son and being a mom over the continuing quest for the golden ring. I never had a hit record in all these years so I still have to chip my living out of granite. I want to be a great parent.

WiMN: What is some advice you’d offer to a young woman pursuing a career as an engineer?

TS: Don’t have kids until you’ve established yourself, unless you have a massive trust fund and can afford excellent nannies and an Airstream as your travelling nursery.

TS: I’ll be taking EGS 1111 and hopefully Advanced CAD and will be much closer to my drafting certification. I’d like to learn to play tennis. As far as work goes, I don’t know. Hopefully there will be enough to get by.

Thanks for reading! Click here to become a member of The WiMN.