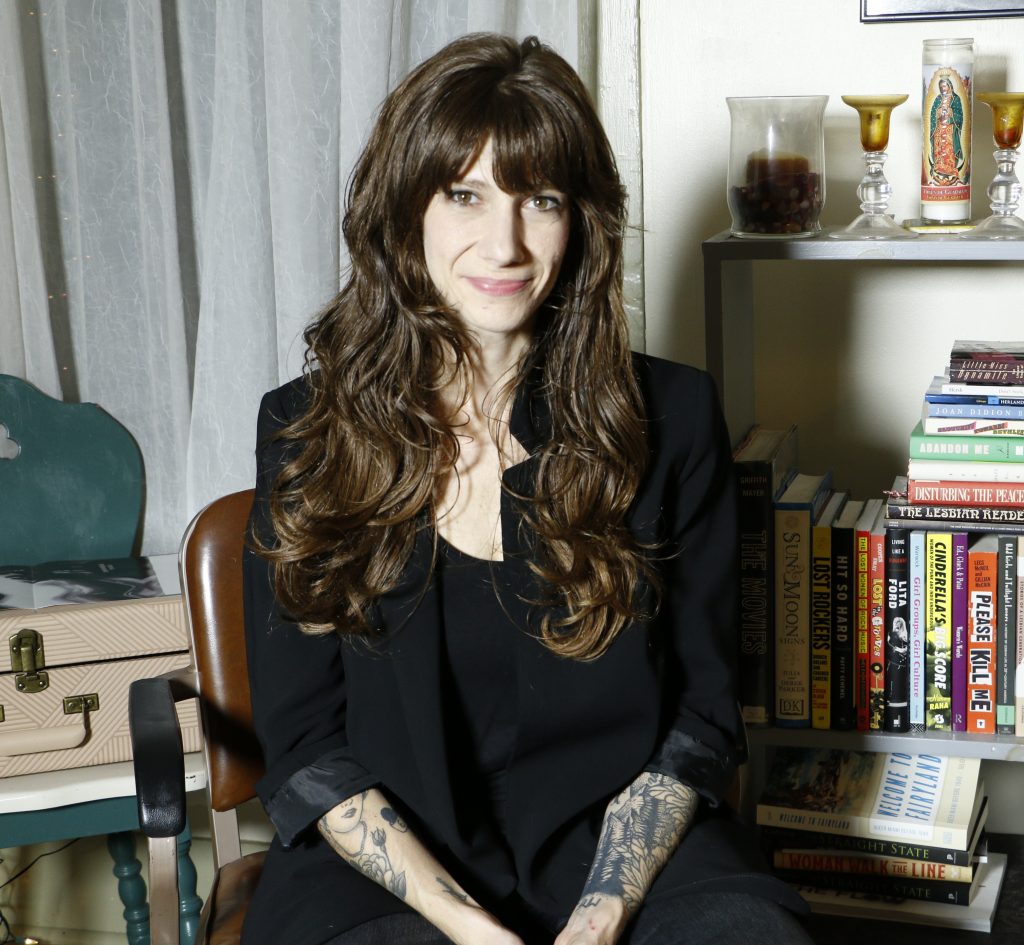 What began as a college symposium turned into an ongoing research project and important platform for women in music. In 2014, Tanya Pearson was attending Smith College in Massachusetts when she created the Women of Rock Oral History Project. This unique project is comprised of digital interviews and written transcripts that document the careers and lives of women in rock music (focusing primarily on artists who have been left out of the popular rock narrative).

During her research, Pearson would become increasingly frustrated at the lack of information on many of the pioneering all-female bands she admired as a teenager. This motivated her to push further in closing the musical gender gap with a more comprehensive history of rock music by creating a well publicized, diverse and accessible collection of personal histories.  Visit the website to learn more: www.womenofrock.org

Pearson is on fire with her sights set on further expansion in 2019. She shares with us how this project has impacted her personally and professionally, and what it has been like learning about the journey so many of these women have endured to get where they are today.

WiMN: What has it been like gathering your interviews and information for the Women of Rock Oral History Project, and how has this effected you on a personal level?

TP: The interviews themselves are the greatest 1-2 hours of my life, always, and the rest of it is really hard work.That being said, I know that these kinds of interviews—long form, personal and professional histories—are so important in achieving a more inclusive popular music history, in general. Women aren’t always given the same level of space and attention in rock media and scholarship, or their individual histories are sort of essentialised. Participants have given very diverse responses and presented diverse stories that subvert both the existing male-centric rock narratives and the singular ‘women in rock’ experience.

The collection has grown exponentially with the help of a few volunteers and the support of the people I’ve interviewed; so on a personal level, I started this not really knowing what I was doing, but knowing that there was a need. I’d say I’ve gone from thinking I was totally insane to even attempt to do something so huge to feeling like I’m doing activist work. I feel capable now. Not as apologetic or self-loathing when things don’t work out or go according to plan. It’s all trial and error and that is always the advice I give to anyone who asks me how to start a passion project.

WiMN: What is your background in music, and who have been your influences?

TP: I pretty much grew up playing music. My mom always encouraged me to pursue creative pursuits and it was sort of required that we all play a musical instrument. I started off playing alto saxophone—I was really into jazz in elementary school—and when I was about 13 I discovered Hole and Nirvana and then Liz Phair and I insisted on playing the guitar and later the drums. I played in a band in high school and throughout my 20s. I still play in bands because I just genuinely enjoy writing music but I’m not a performer. I do not have that gene.

When I was really young, my mom listened to a lot of Aretha Franklin, David Bowie, Madonna, the Supremes, Sade, Brenda Lee and the B-52’s. I grew up listening to good music. When I started playing in bands I sought out women and female-fronted alternative bands—Hole, Sonic Youth, Luscious Jackson, Veruca Salt—and through those bands I discovered other bands and artists like Lydia Lunch, The Germs, The Raincoats, Phranc, Grace Jones, Siouxsie and the Banshees, Jefferson Airplane and Velvet Underground. I’m a punk at heart and I have an obsession with delta blues, showtunes and jazz singers as well. Marianne Faithfull, Nina Simone, and Judy Garland are probably my top performers of all time.

WiMN: With the OHP, you have created a space for women, trans, and non-conforming artists (bravo!). How impactful has it been, especially now?

TP: I think it’s too early to say how impactful its been, but I definitely think it has the potential to change the way we (meaning scholars, the general public, historians, journalists) talk and write about rock music. The more interviews there are, the larger the footprint, and the greater the potential for upending the current popular narrative—which, for the record, I don’t think has changed all that much. It’s still rooted in this hyper-masculine “sex, drugs, rock n’ roll” context which doesn’t leave much room for artists who fall outside of that categorization.

Gender, racial and sexual inclusivity was always my main goal—to kind of remove all of the categorizations that “women” are subjected too and create a collection that accounts for race, gender and sexuality, and various musical subgenres, within the broader context of rock music.

WiMN: Who have been your most memorable interviews collected?

TP: I honestly have such a hard time with this question! I love what I do. It is an honor and a privilege, and most of the time, it’s a really enjoyable experience. I probably come across as disengenous because I tell everyone they’re my favorite interviewee, but I mean it at the time!

I would have to say, in hindsight, Brenda Lee was one of the greatest interviews of my life—personally and professionally. She is like a walking, talking time capsule, an icon and such a kind and gracious person. I wanted her to adopt me when the interview was over.

I’ve been thinking a lot about my friend Kat Arthur. She passed away suddenly a couple of weeks ago. She was the founder of Legal Weapon and was known as the “Janis Joplin of Punk.” Our interview was the first in-depth interview she’d ever done and when she died, it just reminded me how important the work is—to actually sit down with people and give them the time and space to tell their own stories, in their own words. I love her and I miss her very much, as a friend, but I’m so glad we did the interview three years ago.

WiMN: You have a graduate teaching assistant at UMass Public History Program. Share with us a little more on your work there.

TP: I basically applied to graduate school in order to be able to continue working on Women of Rock Oral History Project full time—and hopefully be employable someday! I’m a Ph.D. student and a teaching assistant. I’ll be publishing an oral history or rock music with Umass Press so I figured Umass would take me and they did. I’m in the public history program and that aligns more with my work as an oral historian—I’m less interested in theory and more interested in documenting history and making it accessible to the general public.

WiMN: What do you and the Women of Rock OHP have in store for 2019?

TP: My main goal is to publicize the collection and to secure funding and sponsorship. I have interviews scheduled—I never stop interviewing—and I have a few high-profile artists on the roster which will help get the word out. I’m under contract to write a book and the interviews will be the basis for that. We’re also working on a feature-length documentary film. I see the book and the documentary as vehicles for reaching a larger audience and attracting funding. This collection is something I intend to continue, long-term, so finding ways to make it sustainable is a major issue.