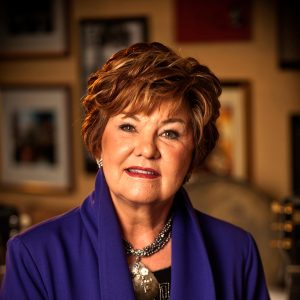 Dinah Gretsch, Executive Vice President and CFO of the Gretsch Company recently celebrated 40 years of her incredible contributions and work in the music retail industry. The festivities took place at the Country Music Hall of Fame and Music in Nashville, Tennessee accompanied by family and friends at a dinner party in her honor.

Dinah has been a prominent figure in the Musical Instrument Industry. Her prominence has been recognized by numerous awards. In 2003 the Atlanta Chapter of the National Academy of Recording Arts and Sciences (NARAS) presented her with the Heroes Award, a distinction awarded to community leaders in the Music Industry. In 2008, she was inducted in the Georgia Music Hall of Fame, which honors individuals who have made significant contributions to the Georgia Music Industry. In 2014, the College of Liberal Arts and Social Sciences at Georgia Southern University honored her with the prestigious Betty Foy Sanders Patrons of the Arts Award. That same year she was honored by the Women’s International Music Network (WiMN) with the ‘Vision’ She Rocks Award for her leadership in the Music Industry, and now sits on our esteemed Advisory Board.

In support of the Gretsch mission to “ENRICH LIVES THROUGH PARTICIPATION IN MUSIC”, Dinah created Mrs. G’s Music Foundation in 2010 to fund music programs in Southern Low Country schools. She also gives grants to individuals to attend guitar and drum camps.

Dinah devotes much of her spare time serving on the Georgia Music Foundation Board and Loyola High School Board in New York City. She also serves on the Finance Board for her church, Sacred Heart in Savannah, GA. Dinah also enjoys her family time with her husband Fred Gretsch (President of Gretsch), six children, sixteen grandchildren, and four great-grandchildren.  Fred honored her saying, “She has a heart of gold and plays a huge role with the worldwide family of musicians, music lovers, and family members, Gretsch artists, and fans. She is an organizer extraordinaire, a financial whiz, a Bigsby team lead, an educator, and the most important half of the Gretsch Co.’s dynamic duo.”

“To think that this company is now 136 years old, and that I’ve been a part of it and was also a main part of it when we purchased the company back Baldwin Piano Co. to bring it back into the Gretsch family, it’s been so very special.” said Dinah.